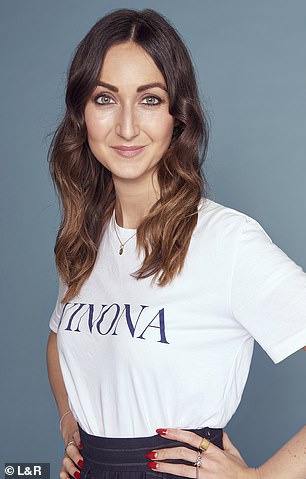 I was an anxious child even before Dad’s cancer struck (pictured: Eve Simmons)

What becomes of the children of cancer victims?

Well, I should know. My dad Jeff was diagnosed with a rare form of sinus cancer when I was aged just seven.

One night, when I was nine, an ambulance – flashing sirens and all – was called to our house.

The chemotherapy treatment he had been receiving had brought on a major blood clot in his brain, increasing the risk of a stroke or sudden death.

He endured a night of invasive tests and was drip-fed drugs at the hospital before returning home with my mum, Michele, in the early hours.

Not that I would have known it. My brother Sam, then aged nine, and I enjoyed a marvellous evening at a neighbour’s house, playing football and gorging on takeaway pizza. These secretive operations were a regular occurrence throughout Dad’s six-year illness, I would later learn.

So as my mother and father’s world imploded, Sam and I enjoyed a blissful early childhood. We were whisked away to the seaside by relatives and were delighted by food packages sent by family friends.

We felt lucky that our father was at home every night and took joy in helping us with homework. Little did we know that his rampant disease forbade him from doing much else.

Fifteen years after his death, I asked my mum: Why the secrets?

‘We wanted to safeguard your childhood as much as possible,’ she says.

‘We didn’t know what was going to happen and if we would have told you back then, you’d be waiting six years for your father to die.’

It wasn’t until Dad lost his hair, three years after his diagnosis, that Mum mentioned the word cancer. And even then, as a nine-year-old, it went over my head.

It was only much later, when I was 12, that they were forced to explain the situation. Mum explained calmly that Dad had deteriorated, and extended family rallied to help. He died in a hospice four days before my 13th birthday.

I thought I’d remained relatively unscathed. But almost a decade later, I developed an anxiety-related eating disorder. My mum thinks the two could be linked. She says: ‘The underlying sense of anxiety was found to have a negative affect.

‘I thought you were like a pressure-cooker and one day all the emotions would build up inside you and burst.’

But I disagree. After all, I was an anxious child even before Dad’s cancer struck. And despite the tragedy of losing him, I feel lucky for a joyous and carefree childhood, filled with unconditional love.

There is no correct answer when it comes to coping with cancer. As trite as it sounds, love really is your best defence.