Two weeks of lounging around at Christmas could permanently damage your health, scientists have warned.

Researchers found that just a fortnight of inactivity is enough for the muscles and bones to get weaker and the heart and lungs to become less efficient.

And they found the risk was particularly bad for older people, who were likely weaker or in worse health to begin with, and could suffer from ‘significant’ deterioration.

The lazy period also made fat build up around the waist which could make someone more likely to remain fatter for the long term and increase their risk of diabetes, for example. 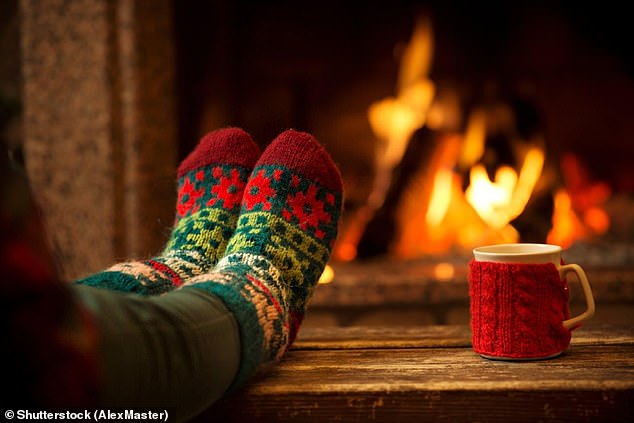 The research team, from the University of Liverpool, said that most studies of physical inactivity look at extreme forms – such as space flight or bedrest – which aren’t relevant to most healthy people.

But they said their study is unique in that it looked at only two weeks of a low step-count of 1,500 per day in young and older normal adults.

People might end up doing less activity when they’re off work over Christmas, struck down with a winter illness or stuck at home because of bad weather.

Before the two-week period of inactivity, both groups – 26 younger participants and 21 older – did the same amount of physical activity.

Over a four-day average, each person normally did at least 10,000 steps per day but did not take part in vigorous exercise.

*As recommended by Liverpool University researchers

1. Take the stairs instead of the lift or escalator wherever possible.

2. Walk to work, get off the bus a stop early or park away from the office so you have to walk in.

3. Move the printer or water cooler away from your desk so you have to get up regularly during the working day.

4. Do your weekly shop at the supermarket instead of shopping online.

5. Don’t spend the whole weekend on the sofa – mix up relaxing with activities like cleaning the house, shopping or going for a walk.

The study set out to look at whether the health of older adults was more affected by inactivity than younger people’s.

Loss of muscle and bone, and fat gain, tend to happen naturally with ageing and the changes lead to a reduced ability to perform daily activities and can lead to chronic health conditions.

The research team said that it’s especially relevant as people are now living for longer, but the time spent in good health has not increased to the same extent.

Although the findings showed that muscle size, muscle strength and bone mass equally reduced in the young and old groups after two weeks with both groups gaining similar amounts of fat in their muscles and around their waist, the older adults had less muscle and more fat to start with.

Heart and lung fitness fell by around five per cent among the younger group and 10 per cent in older people.

Therefore, according to the researchers, the changes are likely to have more of a detrimental impact among pensioners compared with younger adults.

There were also two critical biological measures that substantially declined in the older group but not the young: cardiorespiratory fitness, or CRF, and mitochondrial function.

CRF refers to the efficiency with which oxygen is supplied to muscles during sustained physical activity, and it is influenced by cardiovascular and respiratory health.

Low CRF is usually found in those with poor physical health, with these individuals being more likely to develop diseases at a younger age.

Mitochondrial function, the energy production of our cells, is important for muscle and metabolic health.

The results suggest that these declines in CRF and mitochondrial function could play an important role in the loss of muscle mass and strength and gains in muscle and body fat during physical inactivity.

Study co-author Juliette Norman, a PhD student at Liverpool University’s Institute of Ageing and Chronic Disease, said: ‘The severe impact of short-term inactivity on our health is hugely important to communicate to people.’

She added: ‘If the gym is hard to get to, people should be encouraged to just meet 10,000 steps as even this can guard against reductions in muscle and bone health, as well as maintaining healthy levels of body fat.’

The findings are due to be presented at The Physiological Society’s early career conference, Future Physiology 2019, at Liverpool John Moores University next week.

HOW MUCH EXERCISE DO YOU NEED TO DO?

To stay healthy, adults aged 19 to 64 should try to be active daily and should do:

A good rule is that 1 minute of vigorous activity provides the same health benefits as 2 minutes of moderate activity.

One way to do your recommended 150 minutes of weekly physical activity is to do 30 minutes on 5 days every week.

All adults should also break up long periods of sitting with light activity.