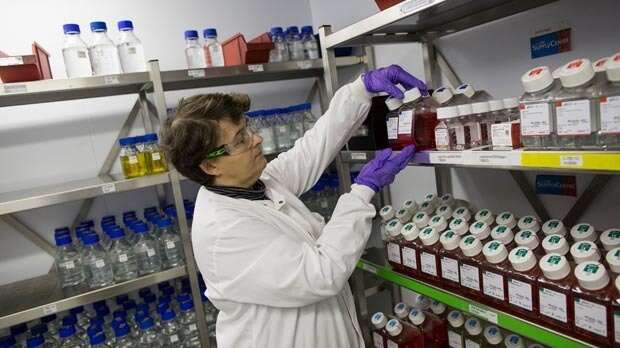 Studying how cells grow naturally is at the heart of cancer research. But it often relies on an unnatural world.

Like the cells in our body, cells grown in a lab are kept alive with food. In the lab, this food – called cell culture media – is the red liquid you often see in plastic Petri dishes. And importantly, lab-grown cells, like our own, behave differently depending on what food they receive.

This is where the complications arise. What’s the best food to give to cells in a lab to make them grow and behave like the cells in our body? Or, put another way, what should cell culture media be made from?

Dr. Saverio Tardito, from the Cancer Research UK Beatson Institute in Glasgow, has been pondering this question. And it’s led to him developing a new cocktail called Plasmax which he believes helps his cells in the lab to behave more naturally. The result, as shown in Tardito’s latest research, is that cells grown in his medium more closely mirror those inside a tumour, making experimental results more accurate.

Plasmax was born out of Tardito’s frustration with the limited number of liquid foods that were available in 2012. Back then he was studying how cells process one of the building blocks of proteins, an amino acid called glutamine. And it was here that he found himself in a predicament. “When we went to design the first experiment I did as most experimenters do. I said: ‘Okay, I have here my cells, which medium do I need to grow them in?’ And I was actually a bit embarrassed by the lack of choices that we had at that time.”

Tardito was in a unique situation. To do his experiments correctly, he needed to vary the amount of amino acids in his media to see how it affected the cells in his Petri dish. But commercial cell culture media tends to be supplemented with two levels of amino acids: a lot of some, and none of others. This wasn’t good enough for what Tardito needed from his cell culture medium, so he made his own. Necessity is the mother of invention, after all.

The cell culture media that most scientists use are based on the same recipe. This tracks back to the 1950s, when the goal of cell culture was “identifying the essential nutrients needed for cancer cells to grow continuously in a Petri dish”, says Tardito. And while the 60-year-old recipe still keeps cells alive, it doesn’t necessarily put them in conditions that mirror our body. And, crucially, this might be skewing scientists’ results.

“So, at that time in 2012, I asked: ‘Why don’t we try to do something more physiologically relevant?” recalls Tardito. He began mixing the first version of his own medium and used it throughout his project, publishing the results in 2015.

But Tardito was left with an itch that he couldn’t scratch.

“The results we were obtaining with my medium were not aligned with results that had been previously published. And I always put that difference, at least in part, down to the difference in the medium we were culturing the cells in.”

So began Tardito’s project to create Plasmax, a more complex cell culture medium based not just on the idea of keeping the cells alive and thriving, but of including nutrients at same concentration as they would be found in our blood. “We simply believed that a medium formulated on the physiology would give us back better and more relevant results,” he says.

And it seems Tardito wasn’t the only one to recognise this problem. In 2017, he was surprised to learn that a lab from Massachusetts Institute of Technology (MIT) in the US published a paper using homemade media that was very similar to Plasmax. This first left Tardito feeling disappointed. But on reflection, this gave him confidence in his idea with validation from “another well-established, leading research group overseas”.

So Tardito continued to document the differences he was finding. “A few years later we had a good amount of results supporting the hypothesis that Plasmax and commercial media are doing different things when we look at the metabolism of cancer cells.”

And his own, updated results that have now been published compare cancer cells grown in commercial media to those in Plasmax, showing convincing results. For example, including ingredients from blood in the Plasmax recipe, such as the micronutrient selenium, makes a difference, and, adjusting the levels of amino acids allows lab-grown cells to behave more similarly to those in our body.

Producing Plasmax on a larger scale

So far, Tardito – like other cell culture mixologists – has been brewing just enough of his concoction to support his group’s projects. But Tardito has received many requests to share some Plasmax, which he is keen to do. Importantly, he is now in touch with a few companies interested in working together to commercialise the medium. It’s still early days, but the growing interest of commercial partners is an essential step towards allowing the wider scientific community to test the medium.

“I think that to appreciate how much difference the medium will do in terms of cancer biology, we need to have range of options available for a wide community of researchers. That is why I am trying to use Plasmax not only internally, but to make it available to a wider community,” he says.

All this may initially seem like scientific pedantry. But cell culture media is vital in lab work with cancer cells. Ultimately, the goal of these experiments is to reduce the complexity of translating lab-based results into people.

“Most of the knowledge that we have accumulated over the last three or four decades on cancer came from looking at cancer cells in a Petri dish, and all these studies use cell culture media to grow them,” says Tardito.

“There is no other option. You cannot grow cells without putting them in a medium that contains nutrients and those nutrients will affect their biology.”

And in the spirit of trying to gather ever more accurate results, he’s the first to admit that Plasmax is not the finished article. “I already have in mind three or four things that should be improved.”

Tardito may never land on the perfect media, and a more complex formula raises questions about its shelf life.

“When you put hundreds of components in a solution you are not entirely sure of how long these components will be stable for,” he says.

But with commercial support, Tardito hopes to see his recipe appear in lab fridges around the world.