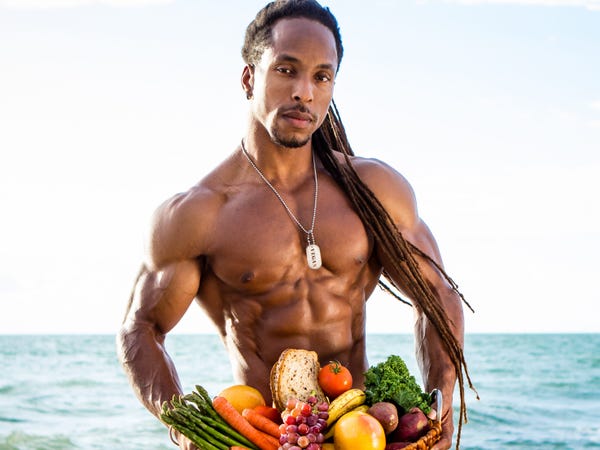 Veganism, the sometimes-controversial philosophy of consuming only plant-based products, is often maligned for being too low in protein, which many non-vegans tend to find through meat, eggs, and dairy.

But bodybuilder Torre Washington is living proof that it's possible to build and maintain an impressive physique without eating animal products. He's been vegan since 1998.

But don't call it a diet — to Washington, it's much more than that.

"I don't use the word diet. I'm not here to die, I'm here to thrive. It's a lifestyle," he told Insider in an interview.

Washington, who moved from the US to Jamaica for a few years, then back to the US, as a kid, was raised vegetarian by his mother. He eventually transitioned to fully plant-based when he became a Rastafarian. Nearly a decade later, he launched a career as a professional bodybuilder and fitness model, and has racked up an impressive list of accolades.

Washington said the keys to his success are simple — an eating plan that is flexible, has variety, doesn't cut out sweet treats, along with plenty of rest to keep his body in top shape.

Arnold Schwarzenegger inspired him to start competing in bodybuilding

Washington said he had always been a big fan of lifting weights, and finally made the leap to bodybuilding competitively in 2009.

"Some people didn't think it was possible with me being vegan, but by my second show, I went pro," Washington said.

Part of his inspiration was a childhood fascination with superheroes, particularly outrageously-muscled characters like Superman and Wolverine.

When he found out Arnold Schwarzenegger, who seemed like a real-life superhero, was a legend in bodybuilding, he want to emulate him. He finally started training to compete while working as an corporate engineer, when a friend who was already bodybuilding encouraged him.

"I thought I looked good until I met him. He was onstage looking bigger then life and that's what I wanted," Washington said.

Although body building has a reputation from being an aggressively masculine culture, sometimes at odds with how veganism is perceived, Washington said he hasn't felt pressured by peers to eat meat.

"They've seen me look the way I look, and I kick their butts onstage," he said. "I've had some judges say they'd like me to try eating meat to get bigger, but I'm not interested. I'm doing just fine putting on muscle."

His diet is surprisingly flexible

Contrary to popular belief, vegans have many sources of protein to choose from. Washington's go-tos include oatmeal, tofu, pea protein, lentils, and rice and beans.

He also eats lots of produce such as Japanese sweet potato, fresh greens, and fruit smoothies.

Surprisingly, Washington doesn't keep an especially strict eating plan. Early in his bodybuilding career, he didn't even track macro nutrients, and barely counted calories, only doing so when he needed to cut weight quickly.

He's since stuck to a more structured nutrition plan, but leaves plenty of room for him to thoroughly enjoy food.

That includes sweets (thankfully, vegan sweets have improved dramatically since he first started eating them in the 1990s). Previously, items like vegan baked goods that were devoid of eggs and dairy tended to have a disappointing flavor and texture. Now, thanks to innovative substitutes, plant-based desserts are virtually identity to non-vegan counterparts.

"I don't restrict myself, I allow myself to partake in cake, ice cream. I eat it on a regular basis, and I can still compete," Washington said.

Sleep and recovery are underrated secrets to muscle-building

His top tricks for a toned body have nothing to do with eating, however.

Washington said the number one mistake he sees people make in bodybuilding, and even just trying to lose weight or put on muscle, is not resting enough.

"A lot of time we're lacking rest, and all of us don't get enough sleep," he said. "We want everything now, and sleep is a time we're not getting anything done, but it's so important overall."

Washington likes to relax by avoiding television and turning off his phone, and taking the time to meditate when possible.

Being vegan has gotten better and easier over time

In the 90s, eating in social situations, particularly at restaurants, could be a challenge.

"I'd go out with friends and wonder what I was going to eat. There were a lot of jokes made. They looked at us as eating grass and twigs, they didn't think of us as eating real food," he said.

Veganism also had a bit of an image problem, with a reputation for being primarily for a certain type of privileged white person who under-seasons their food — despite the plethora of cultures with long traditions of plant-based cuisine, such as Indian, Greek, and Malaysian.

"It's changed for the better because [back then] it was a little cult-ish and harder for people to get into. It had a hippie Caucasian-only vibe, like people didn't use seasonings," he said.

Food science innovations have made it easier to find plant-based substitutions for most every animal product, from burgers to eggs to cheese.

"Back then vegans were the Flintstones, now we're the Jetsons," Washington said. "It's much easier for people to transition to veganism now because food is really similar to what they're already eating."

If you're thinking about going vegan — just give it a try, he says

With all the vegan options now available, it's become more accessible for people to sample plant-based options and dabble in veganism without fully committing to cutting out all animal products.

Washington suggests gradually incorporating plant-based foods into your weekly routine to see how easy it can be.

"Jump in. Take your time, everyone has their own unique journey and it is your journey," Washington said.

Why vegans and meat-eaters can't stop attacking each other