Adults who consume a high dairy diet are up to 25 per cent less likely to develop heart disease, a study suggests.

Previous research has generally leaned the other way and linked dairy to cardiac problems, because things like milk and cheese are high in cholesterol and fat.

But the latest Australian study suggests the other nutrients inside dairy have a protective effect on the heart and help it to function normally.

They said people should stick to dairy products that have less additives and are not sweetened or salted.

Heart and circulatory diseases are behind around 160,000 deaths a year in the UK, while they are behind 655,000 fatalities in the US. 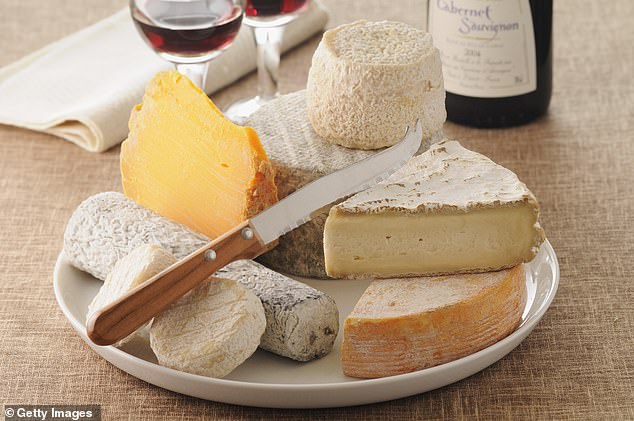 But the study’s experts claimed that the type of dairy product consumed may be behind the heart problems, rather than its fat content

Co-lead author Dr Matti Marklund, from the George Institute for Global Health in Australia, said it was important to eat dairy.

‘While some dietary guidelines continue to suggest consumers choose low-fat dairy products, others have moved away from that advice.

‘Instead, suggesting dairy can be part of a healthy diet with an emphasis on selecting certain dairy foods — for example, yoghurt rather than butter — or avoiding sweetened dairy products that are loaded with added sugar.’

He added: ‘While the findings may be partly influenced by factors other than dairy fat, our study does not suggest any harm of dairy fat per se.’

In the study — published today in the journal Plos Medicine — researchers tested the blood of 4,000 people in their 60s from Sweden.

They followed the participants for 16 years and recorded the number of cardiovascular events and deaths that occurred.

Results were compared to a further 17 similar studies involving 43,000 people from the US, Denmark and the UK to confirm their findings.

Data showed people who had more dairy fats in their diet were 25 per cent less likely to suffer from heart problems compared to those that ate less dairy.

The study did not record what type of dairy product each participant was consuming.

She said: ‘Increasing evidence suggests that the health impact of dairy foods may be more dependent on the type — such as cheese, yoghurt, milk, and butter — rather than the fat content, which has raised doubts if avoidance of dairy fats overall is beneficial for cardiovascular health.’

Professor Ian Givens, a food chain nutrition expert at Reading University who was not involved in the study, said its results broadly matched those of previous papers.

He told the Science Media Centre: ‘This study used fatty acid biomarkers to specifically target dairy fat because it is rich in saturated fatty acids which are generally assumed to increase coronary heart disease risk.

‘As the authors say, there is increasing evidence that the health effects of dairy foods depends on the food type.

‘There is perhaps most evidence available for hard cheese where a range of studies show the physical and chemical food matrix reduces the amount of fat absorbed by the body which leads to moderated or nil increases in blood lipids which are CVD risk factors.’

Several studies have suggested that there may be a link between consuming more dairy products and improved heart health.

Researchers have pointed to the high nutrient content in dairy foods to explain this boost for the cardiovascular system.

They are a major source of vitamin B12, which is used in building red blood cells and keeping the nervous system healthy.

They also contain potassium, which plays a crucial role in maintaining the health of nerves and muscles.

But many dairy products have already earnt a bad name because of their high levels of saturated fat, which have been linked to heart disease.

A British Heart Foundation spokesman previously said: ‘Dairy products don’t need to be excluded from the diet to prevent heart and circulatory diseases and are already part of the eatwell guide, which is the basis for our healthy eating recommendations in the UK.’

They added: ‘Currently, it is recommended that we choose reduced fat dairy as our overall intakes of saturated fat exceed recommendations.’

Other studies have also suggested a link between increased consumption of dairy foods and better heart health.

Britain produces more than 16 billion litres of milk every year, of which almost 7billion is drunk by consumers.