Antibiotic-resistant infections could trigger a new ‘hidden pandemic’ once Covid is over, experts warn

Antibiotic-resistant infections could trigger a new ‘hidden pandemic’ once Covid is over, experts warned today.

Dr Susan Hopkins, head of the UK Health Security Agency, claimed it was important the country does not lurch from one crisis ‘into another’.

She urged Britons to act ‘responsibly’, insisting there was no need to get antibiotics to treat every cold or sore throat.

Antibiotic resistance, deemed to be as big a threat as terrorism and global warming, kills 700,000 people every year.

But experts fear the crisis, fuelled by the unnecessary prescription of antibiotics, will become an even bigger problem over the next few decades.

But she said the fall was likely only down to Covid restrictions such as frequent hand washing cutting the spread of superbugs. 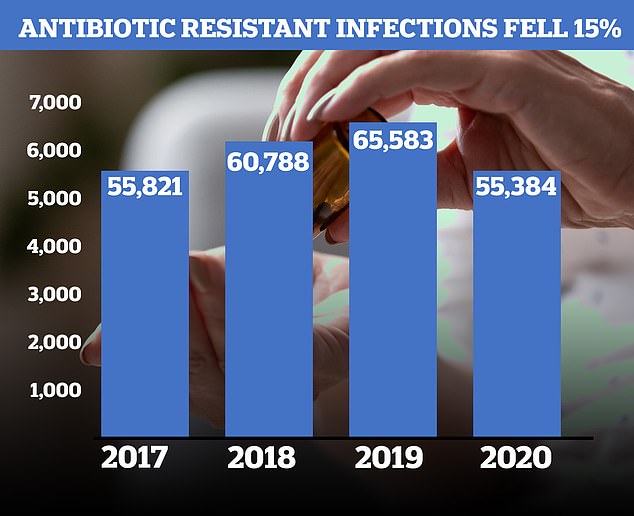 Dr Hopkins said: ‘Antimicrobial resistance has been described as a hidden pandemic, and it’s important that we do not come out of Covid and enter into another crisis.

‘It is likely that Covid restrictions in 2020 including enhanced infection, prevention and control measures also played a part in driving down antibiotic resistance and prescribing.

‘While these measures were severe, serious antibiotic-resistant infections will rise once again if we don’t act responsibly.

She added: ‘As we head into winter, with increasing amounts of respiratory infections in circulation, it’s important to remember that antibiotics are not needed for many cold-like symptoms.

‘Stay at home if you feel unwell. Taking antibiotics when you don’t need them only puts you and your loved ones at more risk in the future.’

Antibiotics may be used to treat bacterial infections that are unlikely to clear up on their own, may infect others, or pose serious risks.

They are needed most when someone suffers from sepsis, pneumonia, a urinary tract infections (UTI), sexually transmitted infections like gonorrhoea or meningococcal meningitis.

But they are also frequently being used to treat illnesses such as coughs, earache and sore throats.

Experts recommend against this, saying these cases normally clear up by themselves.

Taking antibiotics encourages harmful bacteria that live inside you to become resistant.

That means that the medicines may not work when you really need them.

Research in 2017 showed that 38 per cent of people still expect an antibiotic from a doctor when they visit with a cough, flu or a throat, ear, sinus or chest infection.

Antibiotic resistance is considered by scientists to be one of the country’s top health threats.

This is because it allows bacteria to evade common and once effective medicines, leaving doctors unable to treat once curable diseases.

Antibiotics work by attacking dangerous bacteria — such as E.coli which can trigger kidney failure in serious cases — and killing them to stop an infection.

But if the medicines are used too often bacteria can become resistant, making the treatments redundant.

Bacteria can also become resistant if incorrect doses are taken or if they are exposed to low levels of the antibiotic.

These may be insufficient to kill them but enough for them to adapt to survive the drugs.

When this happens stronger antibiotics must be used to stop the illness, but this runs the risk bacteria will also evolve resistance to these as they begin to be used more often.

Figures show some 55,384 antibiotic-resistant bloodstream infections were estimated to have occurred in England last year.

This was the lowest number since records began in 2017 and a 15 per cent drop on the previous year.

But experts said Covid restrictions had ‘played a part’ in the drop. They added cases would likely rise again this year.

The proportion of infections that were resistant to some antibiotics also rose, which experts said was proof that the superbugs would likely be behind even more infections this year.

UK health chiefs have been campaigning to get fewer antibiotics prescribed for years to battle the emergence of superbugs.