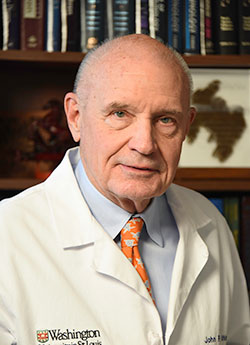 Physician-scientist John Atkinson, MD, has been chosen to receive the Carl and Gerty Cori Faculty Achievement Award at Washington University in St. Louis.

Atkinson, the Samuel B. Grant Professor of Medicine at the School of Medicine, will be honored along with Adia Harvey Wingfield, PhD, the Mary Tileston Hemenway Professor in Arts & Sciences, who has been selected to receive the university’s Arthur Holly Compton Faculty Achievement Award.

Chancellor Andrew D. Martin announced both awards. The two will be honored at the university’s annual Founders Day dinner in the fall.

Atkinson, a rheumatologist, is also a professor of molecular microbiology. He is a leading expert on the role of the complement system in infectious, autoimmune and other inflammatory diseases. This system is an ancient set of proteins that guards the body against bacterial and viral infections by promoting the inflammatory response. A fundamental component of the human immune system, the complement system plays a significant role in the manifestation of many diseases.

In recent years, Atkinson has helped unveil the causes and pathogenesis of autoimmune rheumatic diseases such as lupus and degenerative conditions such as age-related macular degeneration.

Atkinson also has trained generations of graduate students and rheumatology fellows and has treated patients from all over the country who come to his clinic seeking answers regarding rare inflammatory syndromes. He helped discover and identify the mutation in a rare, genetic, microvascular disease known as retinal vasculopathy with cerebral leukoencephalopathy and systemic manifestation (RVCL-S). The disease causes progressive visual loss, brain dysfunction and, eventually, death in middle age. Atkinson co-directs the RVCL Research Center at Washington University.

He earned his bachelor’s and medical degrees from the University of Kansas. He then trained in internal medicine at Massachusetts General Hospital and the National Institutes of Health (NIH). His postdoctoral research training was at the NIH and Washington University.

From 1976 to 1992, Atkinson was director of Washington University’s Division of Rheumatology as well as an investigator of the Howard Hughes Medical Institute. From 1992-97, he was head of the Department of Medicine.

See here for the entire announcement from the Source.