Blood pressure medication may lower your risk of dementia, too: Patients on high doses have 37% less disease-linked damage, study finds

The exact causes of Alzheimer’s disease and dementia are not clear, but some where between 30 and 60 percent of people with Alzheimer’s also have blood flow problems.

People on a higher dose of the drugs had nearly 37 percent less damage – measured by the volume of lesions in their brains – to their brains, and had significantly less brain shrinkage than did their peers who received less aggressive treatment. 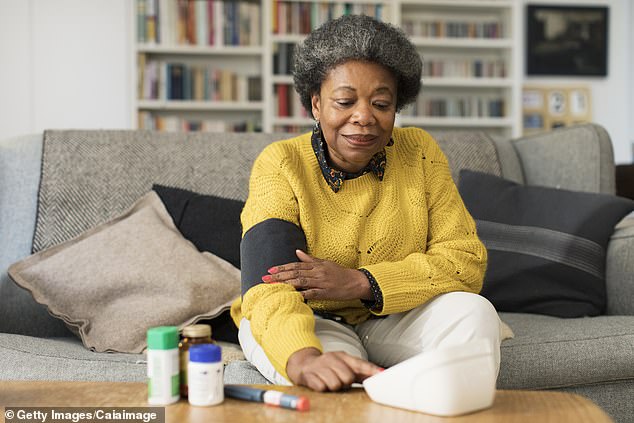 Aggressively treating high blood pressure and bringing systolic pressure down to 120 mm/HG may protect the brain, too, by slowing the development of dementia-related lesions (file)

Heart disease is the number one cause of death in the US, and Alzheimer’s isn’t far behind it.

Preventing, treating or curing these diseases has been a top public health priority for decades.

Scientists now have a fairly comprehensive understanding of the risk factors and problems underlying heart disease.

Genetics, poor diet, age and sedentary lifestyles all contribute to the odds of developing heart disease.

All of these make the heart work inordinately hard.

Without consistent blood flow to them, brain cells sustain damage or die off.

These show up as ‘white matter lesions’ – or white spots – on an MRI.

Spots are perhaps the most common brain scan abnormality, and only become increasingly so as we age.

It’s clear, then, that the cardiovascular system’s health is essential to the brain’s ability to properly function.

But doctors haven’t been sure if there was an exact link between blood pressure, these white matter lesions and Alzheimer’s or other dementias.

So it wasn’t clear if treating high blood pressure might help to reduce the risks of these brain diseases too.

Alzheimer’s is uncurable, barely treatable and, as the population ages, a top priority for US health officials.

If safe drugs already on the market and taken by tens of millions of Americans could reduce Alzheimer’s risks, it would be a massive win in the uphill battle against the deadly disease.

NIH scientists conducted a ‘gold standard’ trial, monitoring 9,300 adults 50 and over at high risk for heart disease beginning in 2010.

For about half of the patients, trial investigators around the country set the target systolic (or top number) pressure at 140 mm Hg, which they considered the ‘standard’ treatment.

The other half was given a target systolic pressure of 120 mm Hg.

NIH actually ended the trial early – after jut 3.3 years – because the results were so striking. Reducing systolic blood pressure to 120 mm Hg drastically cut the risks of heart disease and death.

Out of those 9,300 patients, the scientists involved in the current study took brain scans for 449 participants, scanning their brains once at the start of the study, and once again four years later, to look for changes in the volume of white matter lesions and of the whole brain.

Over the course of the study, the volume of white matter lesions in the brains of the ‘standard’ treatment group increased by 1.45 cm3 on average.

Lesions only increased by 0.92 cm3 on average, for the group whose systolic pressures were brought down to 120 mm Hg.

Those who got the more intense treatment did have more brain shrinkage – especially  if  they were male – but the researchers write off the overall volume losses as statistically insignificant.

‘Both the brain scans and the cognitive tests reinforce the potential benefits that intensive blood pressure management may have on the brain,’ said Dr Lenore Launer, a senior investigator in the NIA Laboratory of Epidemiology and Population Sciences and co-author of the paper.

‘We hope that these findings will become the foundation for future studies on how to protect the brain throughout a person’s life.’