How BLUEBERRIES can lower the risk of tooth decay: Eating just a handful of the fruit a day can fight plaque and gum disease bacteria, dentists say

Dentists have urged manufacturers of mouthwash and toothpastes to start using blueberries in their products.

It comes after scientists found the berries can reduce the risk of tooth decay by lowering the activity of bacteria in the mouth.

Fruits such as these are a rich source of polyphenols which are antioxidants, already known to protect against free radicals in the body.

Dr Nigel Carter, chief executive of the OHF, is now calling for the dark berries to become an ingredient in dental products such as mouthwash. 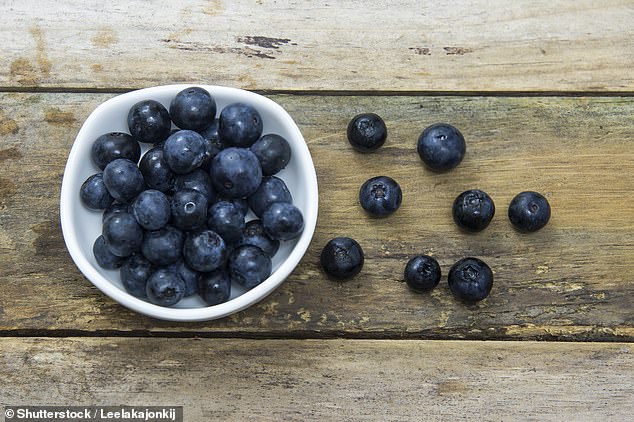 He said the ‘polyphenols stick around in our saliva and will continue to help our mouth, even after we’ve swallowed them’.

Dr Carter added: ‘What is especially exciting is these natural extracts are completely sugar-free. This means they can be added to oral care products in several ways.’

And he added: ‘They can dissolve in water so can be used to create healthy drinks, as well as to reformulate unhealthy drinks packed full of sugar.’

Researchers at the University of Queensland tested extracts of cranberry, blueberry and strawberry on mouth bacteria.

They found significant reductions with cranberries and blueberries, according to the results in the journal Oral Sciences.

Mr Nebu Philip, lead author from the School of Dentistry in The University of Queensland, suggested the fruits could be used as a ‘natural weapon’ in the fight against cavities.

A report issued by the OHF today suggested eating a handful of such berries a day could reduce oral health issues.

This is easier with blueberries which can be eaten raw with breakfast cereal or in yoghurt, for instance, as many find the taste of cranberries too tart, they said.

Because berries contain natural sugar, it would be best to consume them at meal times rather than as snacks, Dr Carter said.

He added: ‘It is important to remember that whole fruit contains natural sugars.

‘This means it can still cause a risk to teeth when consumed in high amounts and too often.

‘It is best to eat fruit at mealtimes like breakfast, or straight after dinner. This will limit the number of times which our mouth is exposed to sugar and acid.’

Polyphenols, found in both blueberries and cranberries, are known to be good for protecting against heart disease and cancer.

They also contain antioxidants, which help hydrate and are a good source of fibre, as well as other nutrients.

Blueberries had the fastest growing sales of any food product in supermarkets in the UK in 2018, with Brits spending an extra £100million on popular berries, according to retail figures from The Grocer.

ARE TRENDY WAYS OF CLEANING YOUR TEETH EFFECTIVE, OR DANGEROUS?

Despite the likes of Gisele Bündchen and the Hemsley sisters swearing by starting every morning with a refreshing glass of hot water and lemon, Dr Ben Atkins, a dentist based in Manchester and Trustee of the Oral Health Foundation, warns the drink effectively dissolves teeth and could even make them darker.

While critics link fluoride to everything from dementia to diabetes, experts argue numerous studies show the mineral does not harm people’s health, with free-from varieties missing out on ‘the main protective ingredient’.

Dr Atkins also describes the ancient Ayurvedic practice of oil pulling, which involves swishing coconut oil around the mouth, as a ‘waste of time’, with Dr Rhona Eskander, Best Young Dentist Winner 2016, adding it will not give you a Hollywood smile.

In terms of brushing your teeth with charcoal or apple cider vinegar, both Dr Atkins and Dr Eskander add the ‘natural remedies’ could do more harm than good as while their acidic, abrasive consistencies may remove surface stains, they could also permanently damage enamel.