A boy’s ‘lazy eye’ turned out to be a sign of a terminal brain tumour, his heartbroken family have revealed.

Charlie Stephenson, nine, showed no other symptoms and his parents Tony and Soeli suspected he would just need corrective glasses.

But the couple’s world came crashing down in February this year when Charlie was diagnosed with the rare diffuse intrinsic pontine glioma (DIPG).

Doctors have said he has nine to 12 months to live because the tumour is inoperable, leaving Mr and Mrs Stephenson feeling ’empty’.

In a few months, Charlie will lose his eyesight, communication and coordination as the tumour grows and presses on crucial nerves.

The family are now hoping to raise £125,000 for a treatment that may help prolong Charlie’s life for a few more months. 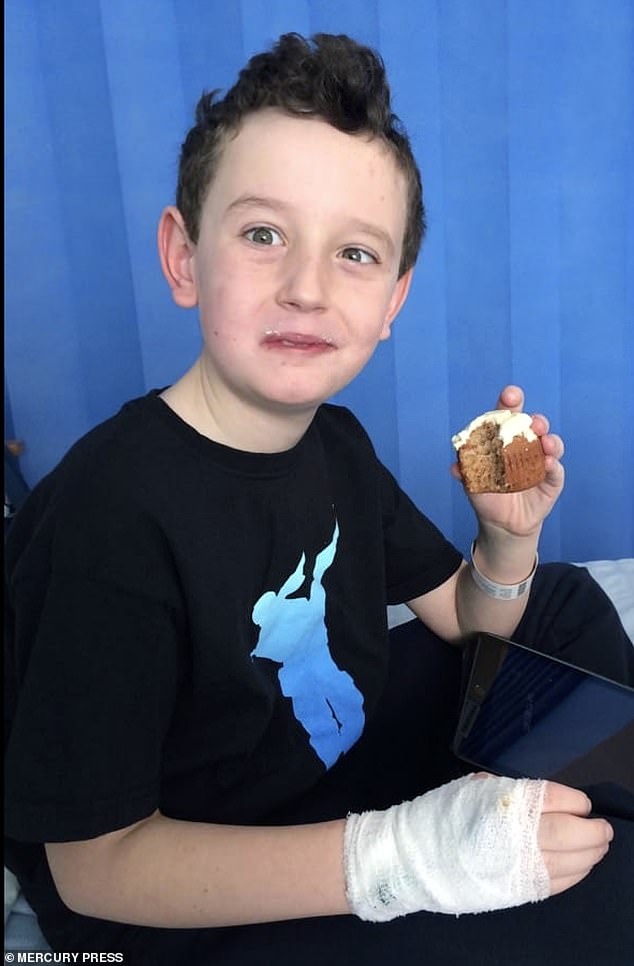 Nine-year-old Charlie Stephenson’s ‘lazy eye’ turned out to be a sign of a terminal brain tumour as his family have been told he only has nine months to live. Pictured in hospital showing his left lazy eye 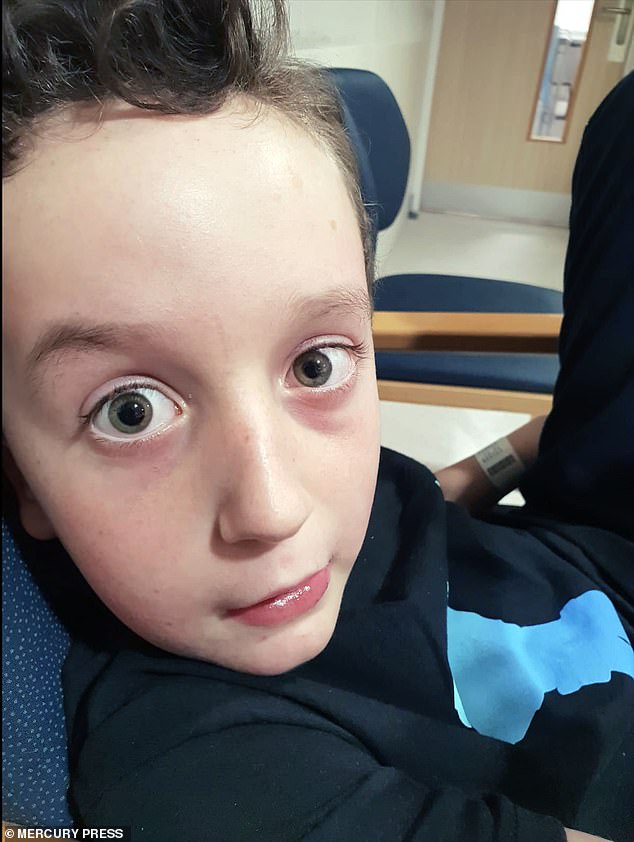 Charlie, who lives in Norfolk, showed no other symptoms and his parents Tony and Soeli Stephenson suspected he would just need corrective glasses 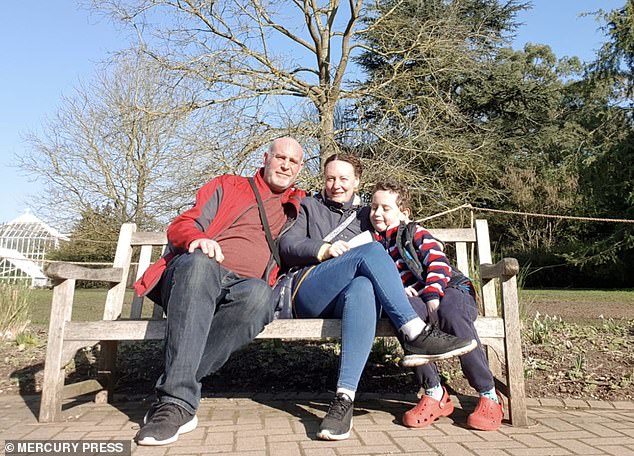 Mr and Mrs Stephenson’s world came crashing down in February this year when Charlie was diagnosed with rare inoperable cancer diffuse intrinsic pontine glioma (DIPG). The family pictured together 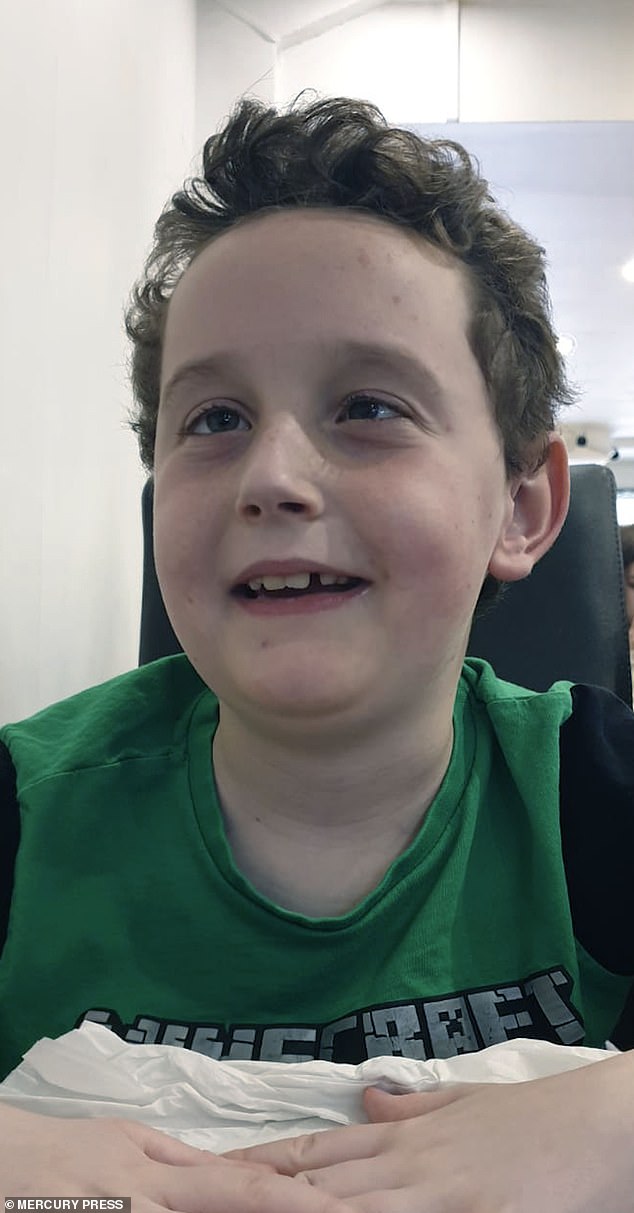 The family are hoping to raise £125,000 for treatment that will potentially double Charlie’s life expectancy. Pictured, Charlie with his eye turning inwards due to the brain tumour

Mr Stephenson, 44, a truck driver from Martham, Norfolk, said: ‘We never thought a lazy eye would turn out to be something so devastating.

‘They think he will have six good months and the last three months the tumour will rob him of his eyesight, his ability to communicate, to feed himself and affect his breathing and heart rate.

‘He could effectively have locked in syndrome which is a hideous way to go for anyone – let alone a nine-year-old boy.

‘It was a total shock when we were told. I had a bonny, bouncy, boy who was full of fun. Life was grand then in less than 10 minutes our lives crumbled.

‘I feel empty. A lot of things do not feel worth doing but I’m just trying to do all I can for him and put everything into giving him what he asks for.’

Mr Stephenson added: ‘I can’t even think that far ahead to a point when he won’t be here. My wife has been having dreams about what he’ll be wearing at his funeral.’

He and Mrs Stephenson, 41, a carer, have both given up work to care for their son after his diagnosis.

Two weeks after they noticed it they took him to the GP and he was referred to the paediatric ward at James Paget University Hospital in Great Yarmouth.

Three days after the referral was made they took Charlie to A&E after he experienced double vision.

A CT scan discovered a shadow on the back of his brain and he was transferred to Addenbrooke’s Hospital in Cambridge.

Following an MRI scan he was diagnosed with DIPG – which can’t be operated on because of it’s located in the pons part of the brain -on February 12.

Mr Stephenson said: ‘We were taken into a room with about seven different medical professionals so at that point we were thinking “this is a lot worse than initially thought”. The first word the consultant said was “sorry”.

‘We were told it was inoperable brain cancer and the survival rate was zero.

‘The phrase they used was “dumb luck”. There’s nothing genetic or environmental that could have affected it.’ 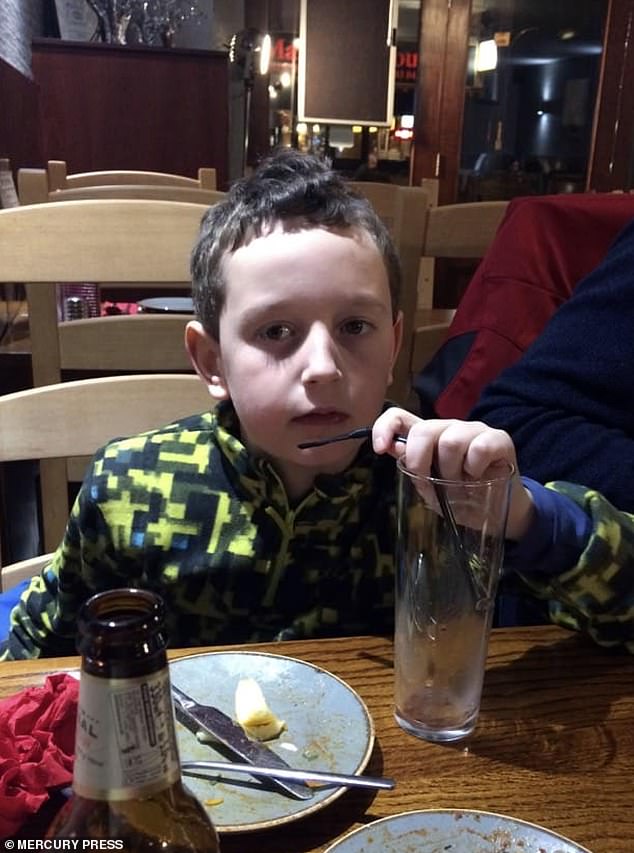 Mr Stephenson said: ‘We’ve spent hours going through photographs of him to see if there’s anything that we missed’. Pictured, Charlie before his diagnosis 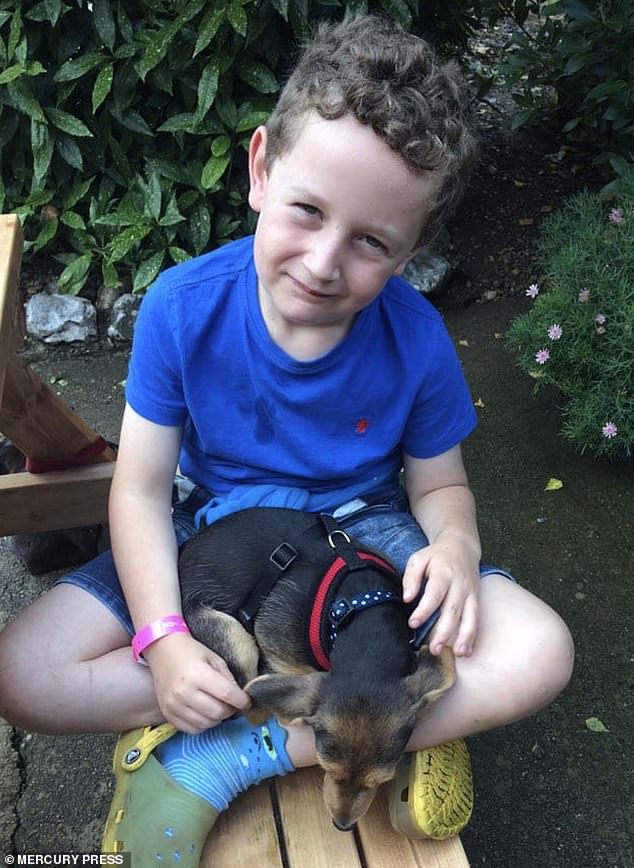 Charlie has been given nine to 12 months to live but there is no guarantee, according to doctors. Pictured before the diagnosis 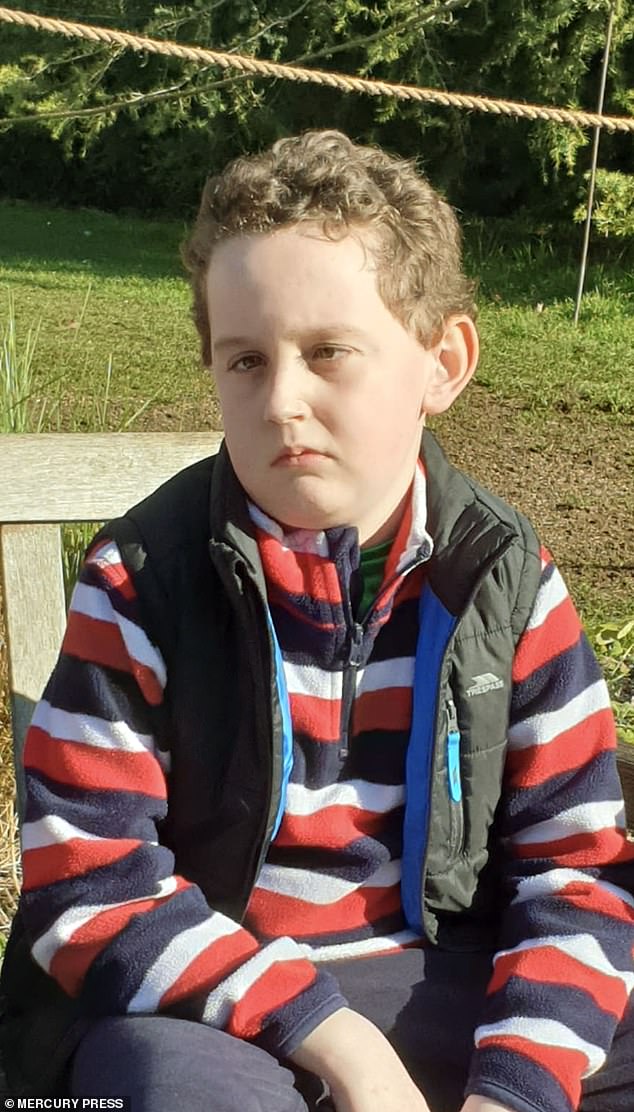 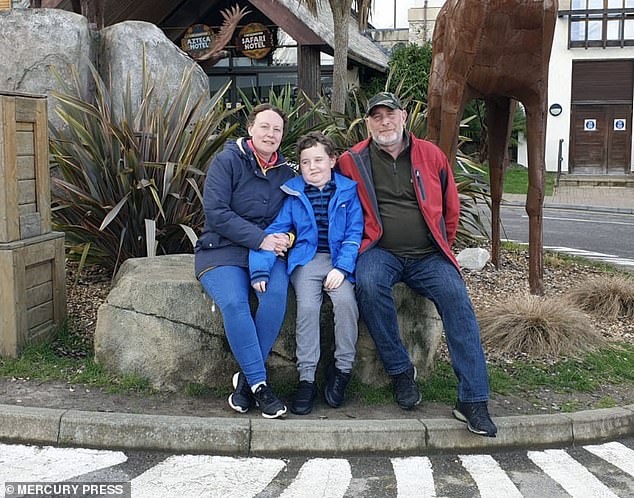 Mr Stephenson said: ‘I had a bonny, bouncy, boy who was full of fun. Life was grand then in less than 10 minutes our lives crumbled’. Pictured, the family since Charlie was diagnosed

Diffuse intrinsic pontine glioma, also known as diffuse midline glioma, is a brain tumour found in a part of the brain stem called the pons.

The pons controls essential bodily functions such as heartbeat, breathing, swallowing, eye movement, eyesight, and balance, and therefore the cancer affects a child’s ability to move, communicate and even eat and drink.

Approximately 20 to 40 children in the UK and 150 to 300 patients in the US are diagnosed with it each year.

Mr Stephenson said: ‘There were no other symptoms or things to look out for.

‘We’ve spent hours going through photographs of him to see if there’s anything that we missed.

‘They told us if he didn’t have radiotherapy we were looking at a maximum of six months.

‘With palliative radiotherapy he’s got nine to 12 months but there’s no guarantee.’ 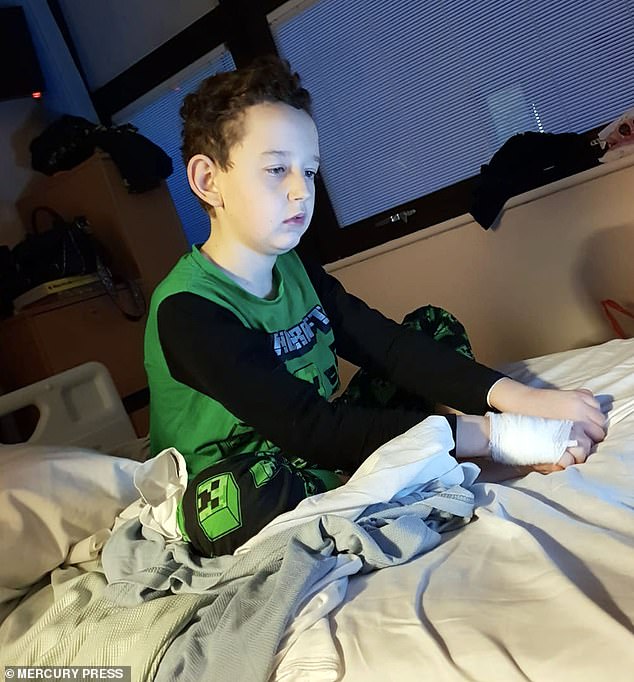 Charlie, pictured in hospital, will lose his eyesight, communication and coordination as the tumour grows and presses on nerves 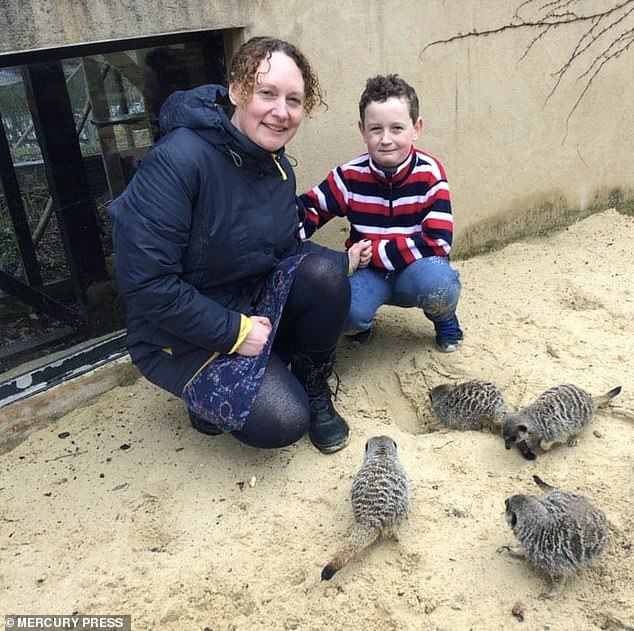 Mr and Mrs Stephenson are trying their best to make the most of Charlie’s remaining days but say it has been difficult. Charlie pictured with his mother at an unknown date

Charlie has had 13 sessions of radiotherapy over three weeks and is now on a course of steroids to try and ease the symptoms – which include slurred speech and struggling to walk.

The family are now looking to raise £125,000 for a procedure that is not available on the NHS.

Although not offering a cure it could prolong Charlie’s life – in some cases doubling life expectancy – and help give him a ‘better death’.

The procedure, called Convection Enhanced Delivery, delivers chemotherapy directly to tumour through four narrow hollow tubes that are inserted into the brain.

It is for high-grade tumours that cannot be operated on due to their location.

Currently, in the UK, the private Harley Street Clinic Children’s Hospital in London is using CED to treat children with this very rare cancer.

The pair have managed to raise more than £25,000 so far thanks to the community rallying round to help and are also keen to raise awareness of the rare cancer.

Mr Stephenson said: ‘It’s amazing how resilient he is. He tries to have a smile on his face. We’ve told him he’s got cancer but he’s not fully aware of what cancer is.

‘We haven’t told him he’s going to die because he would just give up. He’s asked us that question and we’ve explained that people do die from cancer. We’ve tried to be as truthful as we can.

‘We are trying to keep hopeful but I’m also a realist and we know that we have to spend as much quality time with him as possible.

‘It’s about helping him enjoy the things he likes doing. He loves playing Fortnite [a game] and he loves being in nature.’

Diffuse intrinsic pontine glioma (DIPG) is a rare type of brain tumour that can’t be operated on because of it’s location within a crucial part of the brain, called the pons.

This area is responsible for a number of critical bodily functions, such as breathing, sleeping and blood pressure.

The high-grade brain tumour, which mostly affects children, tends to grow quickly and often spreads to other parts of the brain or spinal cord.

Most diagnoses occur in youngsters between the ages of five and 10. The cause of the tumour remains unknown.

More than 90 per cent of its victims will die within 18 months of diagnosis, according to figures.

One of the early indicators of the cancer is a child falling, tripping or losing balance.