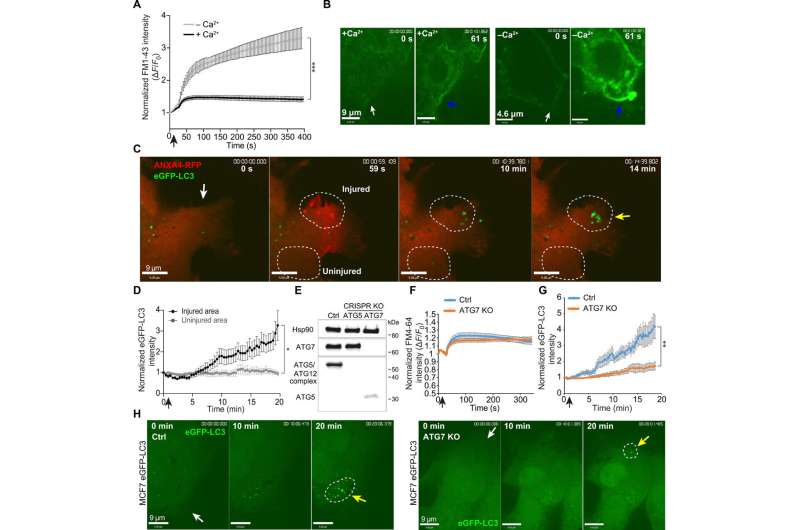 To survive life-threatening injuries, cancer cells use a technique in which they eat parts of the membrane surrounding them. This is shown for the first time in research from a team of Danish researchers.

It is the membrane of cancer cells that is at the focus of the new research now showing a completely new way in which cancer cells can repair the damage that can otherwise kill them.

In both normal cells and cancer cells, the cell membrane acts as the skin of the cells. And damage to the membrane can be life threatening. The interior of cells is fluid, and if a hole is made in the membrane, the cell simply floats out and dies—a bit like a hole in a water balloon.

Therefore, damage to the cell membrane must be repaired quickly, and now research from a team of Danish researchers shows that cancer cells use a technique called macropinocytosis. The technique, which is already a known tool for cells in other contexts, consists in the cancer cells pulling the intact cell membrane in over the damaged area and sealing the hole in a matter of minutes. Next, the damaged part of the cell membrane is separated into small spheres and transported to the cells’ lysosomes, where they are broken down.

In the laboratory, the researchers damaged the membrane of the cancer cells using a laser that shoots small holes in the membrane and triggers macropinocytosis. Here, they can see that if the process is inhibited with substances blocking the formation of the small membrane spheres, the cancer cell can no longer repair the damage and dies.

“Our research provides very basic knowledge about how cancer cells survive. In our experiments, we have also shown that cancer cells die if the process is inhibited, and this points towards macropinocytosis as a target for future treatment. It is a long-term perspective, but it is interesting,” says group leader Jesper Nylandsted from the Danish Cancer Society’s Research Center and the University of Copenhagen, who has headed the new research and who for many years has investigated how cancer cells repair their membranes.

One of the most dangerous properties of cancer is when the disease spreads in the body. If tumors occur in new parts of the body, the disease becomes more difficult to treat and typically requires more extensive forms of treatment. It is also when cancer cells spread through the body’s tissues that they are particularly prone to damage to their membrane.

Researchers at the Danish Cancer Society have previously shown how cancer cells can use another technique to repair the membrane, namely by tying off the damaged part, rather like when a lizard throws its tail.

However, the experiments in the laboratory could indicate that especially the aggressive cancer cells use macropinocytosis. This may be due to the fact that the cancer cell has the opportunity to reuse the damaged membrane when it is degraded in the lysosomes. This type of recycling will be useful for cancer cells because they divide frequently, requiring large amounts of energy and material for the new cells.