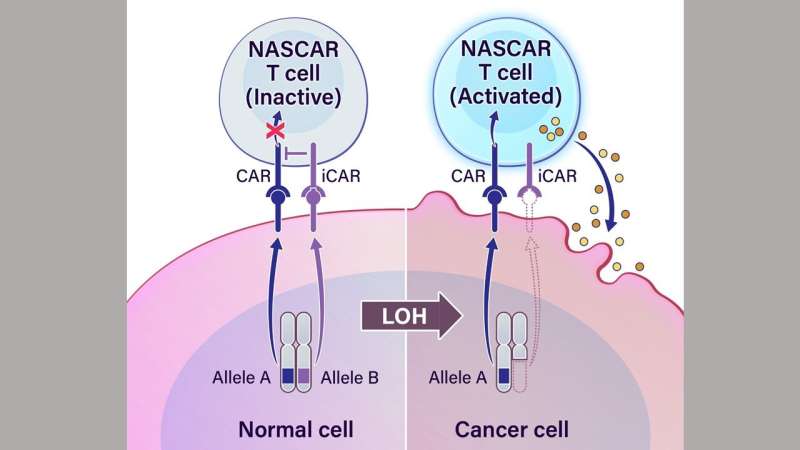 Researchers developed a prototype for a new cancer immunotherapy that uses engineered T cells to target a genetic alteration common among all cancers. The approach, which stimulates an immune response against cells that are missing one gene copy, called loss of heterozygosity (LOH), was developed by researchers at the Ludwig Center, Lustgarten Laboratory and the Bloomberg~Kimmel Institute for Cancer Immunotherapy at the Johns Hopkins Kimmel Cancer Center.

Genes have two alleles, or copies, with one copy inherited from each parent. Cancer-related genetic alterations commonly involve the loss of one of these gene copies.

“This copy loss, or LOH, is one of the most common genetic events in cancer,” says Kenneth Kinzler, Ph.D., co-director of the Ludwig Center, professor of oncology and study leader.

The novel cancer immunotherapy approach inverts this missing gene copy into an immune cell-activating signal. “Historically, these missing gene copies, although a hallmark of cancer, have not been viable therapeutic targets because the protein is missing. There is nothing to target with a drug,” explains Kinzler. Immunotherapy, however, and the ability to engineer cancer-killing T cells to be activated with chimeric antigen receptors (CARs) and deactivated or turned off with inhibitory chimeric antigen receptors (iCARs), made it possible to target LOH with T cells, he says.

These findings were reported March 15 in the Proceedings of the National Academy of Sciences.

CARs are engineered receptors that bind to specific antigens on the surface of cancer cells. The antigen is a red flag of sorts that marks the cancer cell for destruction. In this approach, the CAR binds to and kills cells with LOH. The researchers termed their approach NASCAR, for neoplasm-targeting allele-sensing CAR.

The NASCAR T cell is engineered to express an activating molecule (CAR) and an inhibitory molecule (iCAR). The approach relies on a “NOT” gate to turn the T cell on or off. A NOT gate is a computational term used to describe negating the signal of an input. For this immunotherapy approach, it instructs the engineered T cell whether or not to take action upon encountering a normal cell or a cancer cell. If both gene copies are present—A and B—the inhibitory molecule is activated, and the engineered T cells do nothing to the normal cell. If one gene copy is present and the other is missing—A and not B—the engineered T cells are activated and kill the cancer cell.

“In normal cells where both alleles are present and expressed, the NASCAR T cells simultaneously receive both on and off signals that—in essence—cancel each other out,” explains Michael Hwang, Ph.D., a former graduate student at the Johns Hopkins University School of Medicine and first author. “However, in cancer, one allele is lost, so there is no inhibitory, or off signal.” The researchers created artificial receptors—the CAR and iCAR—that are capable of distinguishing between proteins expressed from either of the two alleles.

“The cancer cell has to express allele A and not allele B in order to activate the NASCAR T cell,” explains Brian Mog, M.D./Ph.D. candidate at the Johns Hopkins University School of Medicine and co-first author.

The researchers successfully tested their NASCAR therapy in three independent cell lines and also in mouse models. This included models with and without LOH to confirm the specificity of the approach to the genetic alteration. For their laboratory studies, the researchers used HLA genes, but they plan to expand the approach to other genes that undergo LOH. Ongoing research will also focus on improved versions of these engineered T cells with more precisely regulated CARs and iCARs.

“This study provides proof-of-principle that this approach can be used to selectively kill cancer cells,” says Shibin Zhou, Ph.D., associate professor of oncology and study co-leader, adding that it will require several more years of testing before it can be implemented clinically. “It is a long and complex process to assemble and fully test all of the components.”

The new discovery builds upon more than three decades of research by Kinzler and Ludwig Center co-director Bert Vogelstein, M.D., who first identified the genetic alterations that contribute to cancer development and growth and are now developing new ways to use these alterations as therapeutic targets.