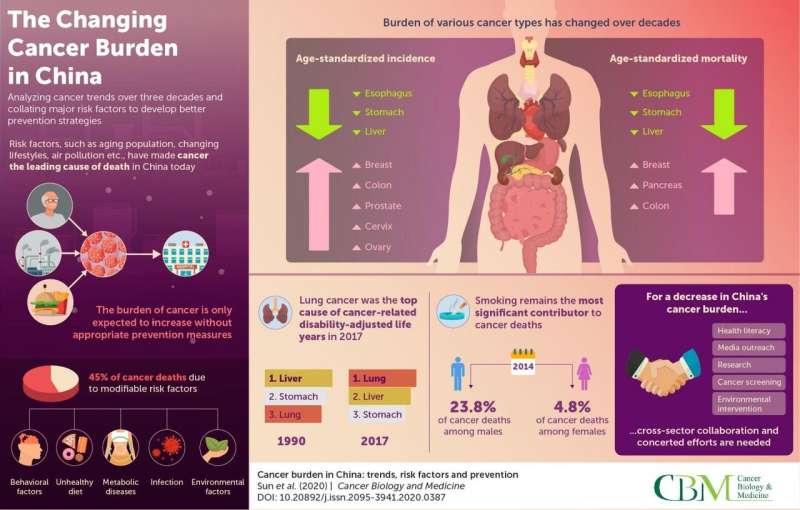 The past century or so has seen unprecedented technological, scientific and sociological evolution worldwide. These have accompanied global shifts in people’s lifestyles and rapid changes in the environment, both natural and man-made. An unfavorable consequence of these alterations has been the increasing burden of cancer on human society.

As the country with the largest population, China has borne this burden heavily. Despite the massive progress China has made in healthcare since the 1950s, cancer has become the leading killer in the country. In 2015, nearly 2.4 million people died from the disease. Cancer lies latent for years before it manifests, so its burden will only continue to grow in the coming decades.

But when you break down these statistics by type of cancer and risk factor, what do the salient trends look like? A group of researchers reviewed data from various national mortality surveys, cancer registries and online databases to find out.

Lead researcher Dr. Wanqing Chen, director of the Office of Cancer Screening, National Cancer Center/National Clinical Research Center for Cancer/Cancer Hospital, China, says: “This review could provide scientists and policymakers with a tool to find what works, what matters, and what is expected.” The paper is published open access in Cancer Biology & Medicine.

The team’s perusal of 22 Chinese registries revealed an increase in the cancer incidence from 2000 to 2011, with the increase being largely attributable to increased incidences of colorectal, prostate, breast, cervical and ovarian cancers. Interestingly, the incidences of liver, esophageal, and stomach cancers reduced significantly. This could be because of the widespread hepatitis B vaccination across the country during this period in addition to an overall improvement in food preservation practices and living conditions.

Cancer mortality data from 1990 to 2015 mirrored the incidence data with rising mortality rates seen in the cases of colorectal, pancreatic and breast cancers and falling rates seen in stomach, esophageal, and liver cancers. Yet, though the burden of these upper gastrointestinal cancers has fallen significantly, it still hangs heavy.

Between 1990 and 2017, lung cancer climbed to the top of the list of the types of cancers responsible for years of healthy life lost to illness, disability or death (disability-adjusted life years, DALYs). Liver and stomach cancers were second and third in line.

Further research suggests that quite a large chunk of these cases and deaths could, perhaps, have been prevented. Data from the National Cancer Center, China, attributes 45% of cancer deaths in the country to modifiable risk factors—behavioral, clinical or environmental. For instance, 23.8% of cancer deaths among men and 4.8% among women in 2014 are attributed to smoking. From 1990 to 2017, cancer deaths caused by smoking increased by over 150%. China currently consumes about 40% of the world’s tobacco, and if habits don’t change, the future looks grave.

However, there is a spot of light. Technological advancement coupled with good healthcare and insurance policies and a growing general awareness among the people have, perhaps, contributed to the improvement in cancer survival rates seen between 2003 and 2015.

Still, prevention remains better than cure. Dr. Chen says, “Taking all this critical information together, one can see that implementing cost-effective approaches for primary prevention is of utmost importance. Our paper highlights the requirement for collaborative efforts by the government, public health organizations, and the people to reduce the cancer burden in the country. We hope that our work can inform policies such as Healthy China 2030.”