Man, 56, rushed to hospital after the fried chicken bone he accidentally swallowed perforated his small bowel… only for the SAME bone to rupture it again just two months later

A man needed hospital treatment after a chicken bone he accidentally swallowed perforated his bowel.

But it did not just happen once to the unnamed 56-year-old, who suffered another perforation from the same bone two months later.

In the first instance, doctors gave him antibiotics but didn’t deem it necessary to remove the 5cm-bone.

However, when he returned eight weeks later with sudden pains and a fever it was discovered that the same bone had injured his bowel again.

The patient underwent various surgeries while in hospital for 45 days, as the offending chicken bone caused a cascade of problems. 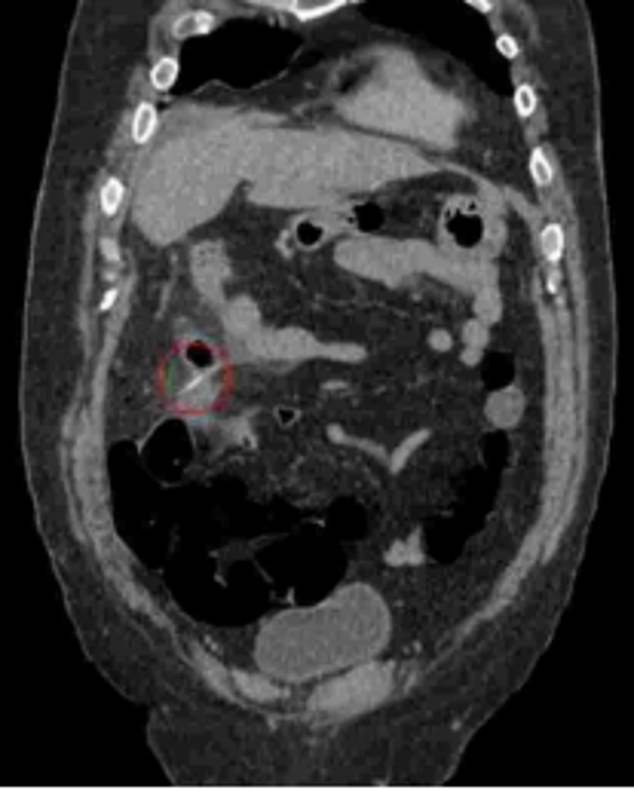 A 56-year-old man was rushed to hospital after a fried chicken bone he accidentally swallowed perforated his small bowel. The perforation is circled in red on CT scans 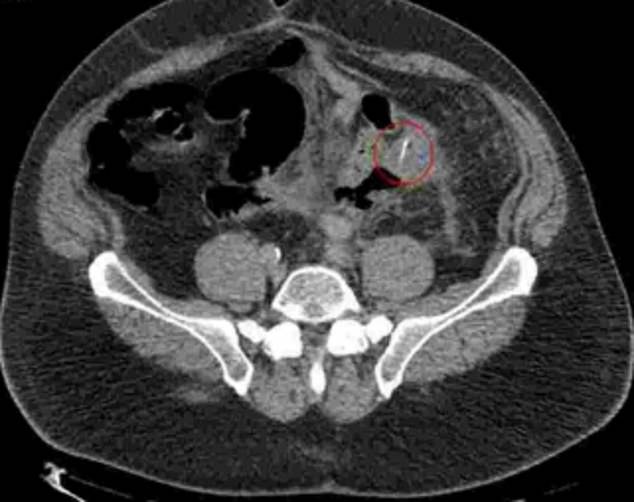 The unnamed man, from London, returned two months after his first treatment with sudden pains and a fever, when it was discovered that the same chicken bone had continued to injure his bowel. Pictured, a scan showing a second hole in his abdomen

It’s not clear how the bone eventually left his body, but doctors released scans that showed it reaching the rectum.

The man was treated by doctors led by Dr Andrew James Brown at Kingston Hospital in London. The tale was published in BMJ Case Reports.

Dr Brown said it was the first time that the same foreign body had caused a person to need hospital treatment twice for two perforations.

Writing in the journal, he said it is ‘well-documented’ in medical literature that fish and chicken bones can perforate the gastrointestinal tract.

However, he added: ‘Here, we present the first case (to the best of our knowledge) of two separate small bowel perforations necessitating two separate hospital admissions, resulting from the same foreign body.

‘Not only this, but the same foreign body passing through the bowel after making both perforations.’

When the man first came to hospital he had pain in his stomach that had worsened over three days.

Tests revealed significantly high inflammation in the body, and a CT scan showed it was concentrated in the right upper part of the abdomen – but it was unclear why.

It was a radiographer that suggested it could be caused by a chicken bone, and the patient revealed he had enjoyed a meal of fried chicken in the days before. 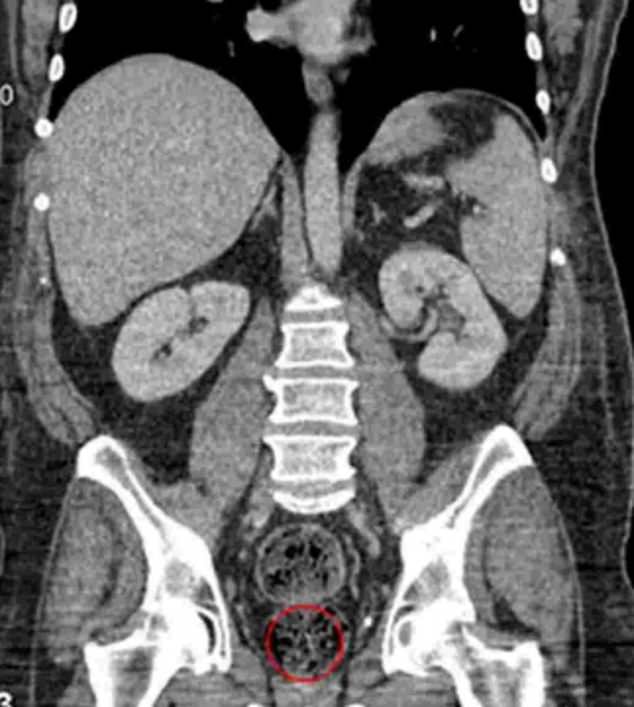 Doctors found the chicken bone lying in the rectum, having migrated the entire length of the GI tract –  the food pipe, small intestine, large intestine, and rectum

HOW LONG DOES IT TAKE FOR A FOREIGN OBJECT TO PASS THROUGH THE BODY?

A group of Australian doctors each swallowed a piece of Lego as part of an odd experiment to work out how long it really takes for it to pass through the body.

As children are often rushed to hospital after swallowing small items, such as Lego, researchers from the University of Melbourne enlisted the help of six medical professionals and had them swallow the head of a Lego man.

The bizarre experiment, which the team branded ‘dedication to paediatrics’, was published in the Journal of Paediatric and Child Health.

Participants ingested a Lego head, after which it was a case of searching for the item in faeces, with the ‘search technique decided by the participant’.

The study found the small toy should be out within one to three days.

However, one patient never found the piece they swallowed in their faeces, searching for two weeks.

They added that although it is possible children’s digestion time would be different from an adult, there is no evidence to support this.

At this point, his symptoms were already improving with the use of antibiotics, and so the decision was made not to interfere with removing the bone.

Small bones usually don’t cause harm and can be passed eventually, and the decision on whether to remove a foreign body is carefully weighed up by medics on individual cases.

After ten days in hospital, the man was discharged with an eating plan. But he was back again within two months.

Hospital tests showed his heart rate was through the roof, coupled with a fever, and the lining of his abdomen was inflammed.

Imaging showed the bone was still in his bowel and had caused another perforation. He denied eating any chicken since his last health scare.

He was taken into emergency surgery where bodily fluid was found freely moving due to the holes in his bowel.

Doctors sewed the holes up and washed his bowel out – but the chicken bone was nowhere to be seen during the surgery.

The patient did not get any better. In fact, his abdominal pain got worse, caused by pockets of air and a fistula – an abnormal opening between organs.

The doctors discovered the bone had travelled the length of the GI tract, and was in the rectum. It is unclear if it was removed.

But Dr Brown wrote: ‘The patient was seen in clinic two months after discharge and has been progressing well.

‘At this time, he was tolerating a normal diet well and had no complaints, having returned to work. The patient was, therefore, happy to be discharged.’

Toothpicks and bones are the main causes of a perforation in the stomach, but diagnosis can be challenging if a patient can’t remember swallowing it.

Dr Brown noted that sharper objects pose the most risk, with paperclips and pins being particularly dangerous, according to a review of 542 cases.

‘Removal of ingested or impacted foreign bodies is suitable for larger objects but may not be suitable for small items, such as bones,’ Dr Brown said.