There has been a huge increase in the number of children needing treatment for serious mental health issues including eating disorders, figures reveal.

The statistics for England include children who are suicidal, self-harming, suffering serious depression or anxiety, and those with eating disorders. 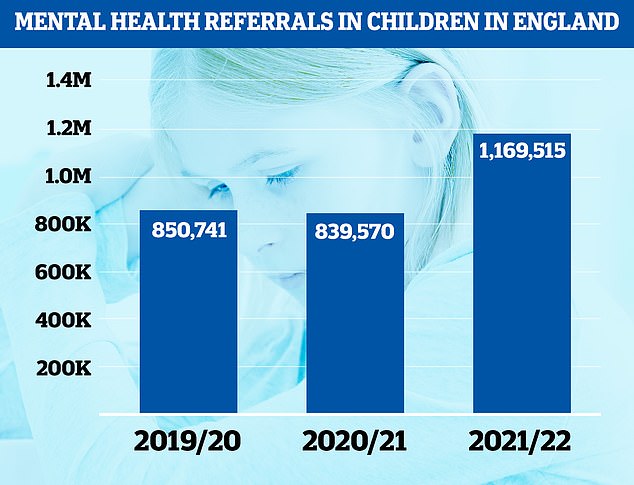 For people of all ages, including adults, the data suggests 2022/23 could see the highest number of hospital admissions for eating disorders.

Dr Elaine Lockhart, chairwoman of the child and adolescent psychiatry faculty at the Royal College of Psychiatrists, said the rise in referrals for children and young people reflects a ‘whole range’ of illnesses.

She said ‘specialist services are needing to respond to the most urgent and the most unwell’, including youngsters who have psychosis, suicidal thoughts and severe anxiety disorder.

Dr Lockhart said children and young people’s mental health had been getting worse before the pandemic, with increasing social inequality, austerity and online harm playing a role.

Dr Agnes Ayton, chairwmoman of the eating disorders faculty at the college, said patients seen ‘on the front line… are usually quite severely ill’ and services are struggling to meet demand.

She said a number of factors can affect a child’s chance of developing an eating disorder, such as genetics, social media, anxiety (including from the pandemic) and weight-loss advertising.

She added: ‘The numbers, the trends, are going going up. There definitely has been an impact of the pandemic but the trends have been going up since way before then.

‘There is no indication that the figures will go down without a strategy that includes prevention, improved treatment, better access to effective inpatient treatment and better research facilities.’

Dr Ayton said the figures on hospital admissions for children and young people were ‘utterly heart-breaking’, adding: ‘Without early support eating disorders become much worse and harder to treat, with possible life-altering consequences.

‘If the Government and NHS leaders are serious about dealing with this ongoing eating disorders crisis, they must ensure specialist services are supported with the same level of focus given to elective care.’

The data shows that anorexia is the most common eating disorder leading to hospital admission among all ages, with 10,808 admissions in 2021/22.

Bulimia is the next most common, with 5,563, while other eating disorders accounted for 12,893 admissions.

A spokesman for the Department of Health and Social Care said: ‘Improving eating disorders services is a key priority and we’re investing £53million per year in children and young people’s community eating disorder services to increase capacity in 70 community teams across the country.

‘We are already investing £2.3billion a year into mental health services, meaning an additional 345,000 children and young people will be able to access support by 2024 — and we’re aiming to grow the mental health workforce by 27,000 more staff by this time too.’