Children with depression could be offered NHS therapy on their smartphones to avoid long waiting lists.

Under new guidance, GPs will be able to recommend digital cognitive behavioural therapy (CBT) for children aged five to 18 suffering with mild depression.

The therapy would use thought-provoking activities, and alert children to go back to their doctor if they are having potentially suicidal thoughts.

The National Institute for Health and Care Excellence (Nice), who made the recommendations, hope it will give access to treatment quicker.

Statistics show that ten per cent of young people aged five-16 have a clinically diagnosable mental problem, but only 70 per cent have not had appropriate interventions at a sufficiently early age. 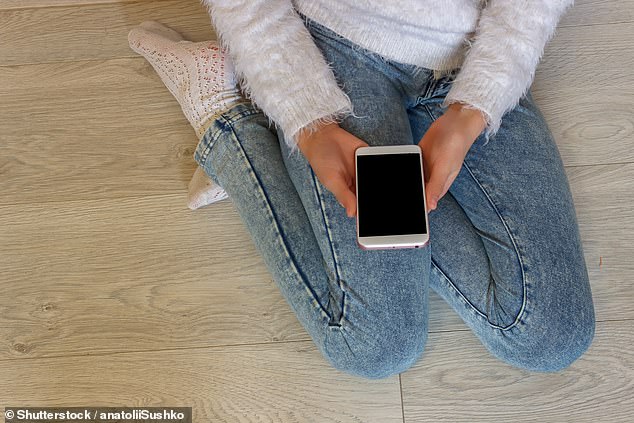 Group CBT is also recommended in the guidelines as an option and doctors are told to take account of the child’s or carer’s preferences.

Paul Chrisp, director of the centre for guidelines at Nice, said: ‘In this update to our depression in children guideline, we reviewed evidence for the most effective psychological interventions for children and young people with depression.

‘The evidence showed digital CBT and group therapy were most effective at reducing depressive symptoms and we have recommend these as first-line options for children and young people with mild depression.

The therapy would be for children with continuing symptoms of mild depression who do not have other significant health conditions or suicidal thoughts.

Modules may include writing down feelings, answering questions to identify dysfunctional thinking and tasks to help challenge negative thoughts.

Children as young as two are developing mental health problems because of smartphones and tablets, scientists warned in November.

Just an hour a day staring at a screen can be enough to make children more likely to be anxious or depressed.

This could be making them less curious, less able to finish tasks, less emotionally stable and lowering their self-control.

Although teenagers are most at risk from the damaging devices, children under the age of 10 and toddlers’ still-developing brains are also being affected.

Researchers at San Diego State University and the University of Georgia analysed data provided by the parents of more than 40,000 US children aged two to 17 for a nationwide health survey in 2016.

Adolescents spending more than seven hours a day on screens are twice as likely to have been diagnosed with anxiety or depression as those who spent an hour.

The US National Institute of Health estimates children and adolescents commonly spend an average of five to seven hours on screens during leisure time.

Other modules might look at developing coping strategies, setting goals and finding ways to improve self esteem.

Some programmes, which would also be accessible via computers and tablets, would alert children who are showing signs of needing more help from their doctor or a counselor.

Digital CBT is already recommended for adults with mild to moderate depression.

But experts have recognised young people’s heavy use of their digital devices as a way in for faster treatment.

Claire Murdoch, NHS England’s national mental health director, said: ‘Given how quickly technology is constantly evolving and the fact that young people are usually at the forefront of this change, updating this draft guidance is another step forward.

‘Digital and online interventions can play an effective and important role in treatment, particularly when backed up by face-to-face support, and the NHS long-term plan makes clear that the health service will continue to look to harness the benefits these advancements can bring.’

Dr Bernadka Dubicka, chairwoman of the child and adolescent faculty at the Royal College of Psychiatrists, said: ‘We know there is a huge demand for treatment, and digital CBT can be one option amongst others.

Although it has its benefits, the draft guidelines have acknowledged that digital CBT may not be for everyone.

The child or young person’s history and circumstances should be considered, for example, their family context and how they are coping at school.

Mr Chrisp said: ‘The guideline update emphasises the importance of a child or young person’s personal choice when receiving treatment for depression.

‘We want to ensure children are offered a range of therapies to suit their needs and individual preferences are placed at the heart of their care.’

Figures show 50 per cent of mental health problems are established by age 14 and 75 per cent by age 24, according to the Mental Health Foundation.

During the wait for mental health services, three-quarters of young people see their condition deteriorate further, according charity Young Minds.

A 2018 survey of more than 2,000 parents and carers found that young people and their families are often left to ‘fend for themselves’ for months while waiting for help from NHS child and adolescent mental health services (CAMHS).