Councils facing £2.4BILLION black hole in social care funding urge the Government to continue grants which make up 29% of their cash

Local councils in England fear they will be left with a £2.4billion black hole in their social care budgets next year.

The County Councils Network has, on behalf of local authorities around the country, urged the Government to continue its vital grant funding.

Many councils rely on money from the central government to be able to care for elderly and disabled people.

But they say they’re ‘in the dark’ about where the money will come from after next year when current funding schemes are due to end.

If the current grants aren’t continued councils will have to cut billions of pounds worth of services just to be able to balance their books, the CCN warned. 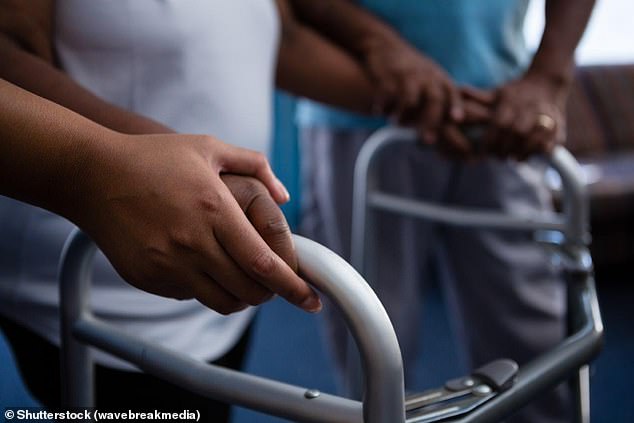 Many councils rely heavily on funding from central government to prop up their social care services, but billions of pounds are coming from temporary grants which have not been guaranteed beyond next year (stock image)

The CCN’s chairman, David Williams, said: ‘It would be inconceivable that the temporary grants – particularly the Better Care Fund – that have allowed us to prop up care services and address pressures on the NHS over the past few years, will not continue.

‘But we are still in the dark over whether this lifeline for care services will continue.

‘With budget planning for 2020/21 underway, we will reluctantly have to seek to decommission services that are directly funded by these grants in the coming months, in order to present a balanced budget next year – unless this funding is continued.

‘We urge the Chancellor to use next month’s Spending Review to commit to rolling over these grants.’

The organisation, which represents 36 councils across the country, want the Government to keep paying the £1.8bn Better Care Fund, the £316m Social Care Grant and the £239m Winter Pressure Grant.

Chancellor Sajid Javid, formerly the Secretary of State for Local Government, is set to lay out Parliament’s commitments in his annual spending review next week.

Social care pressures are increasing because the public health improvements are pushing up the average age of people in the UK.

More people are living longer and surviving with one or more potentially serious illnesses, meaning they are more likely to need care at home, in the community or in council-funded spaces in care homes.

For councils under the CCN’s remit the grants account for more than a quarter – 29 per cent – of the funding they need just to maintain current standards of care.

The rest of the money must come from council tax rises or service cuts.

Mr Williams added: ‘This alone won’t be enough however.

‘Councils in aggregate face an extra £650m costs next year due to rising demand and costs of delivering adult social care, with the bulk of this falling on county areas.

‘If we are to protect frontline services, the Chancellor must provide councils with the resource to fully fund these pressures as a short-term measure ahead of genuine reform to the system.

‘If not, once again council taxpayers will be asked to foot the bill, while frontline services will inevitably be reduced.’

Ian Hudspeth, spokesman for the Local Government Association, said: ‘People’s lives are improved for the better by councils, with every pound invested by government in council-run services such as social care relieving pressure on other essential services like the NHS.

‘However, councils need financial certainty in next week’s Spending Round and urgent confirmation that all current funding streams – including the Better Care Fund – will continue into next year, so that they can continue to plan for the future and make the right decisions for their residents.’

Britain spends less on social care than nearly all the other countries in Western Europe, figures revealed this month.

The UK is ranked 10th out of 12 comparable nations, with its level of state social care spending just half that of Norway and the Netherlands.

Only Portugal and Spain are below Britain. However, they – like most other Mediterranean countries – see relatives play a much greater role in caring for loved ones.

Analysis based on figures from the Organisation for Economic Co-operation and Development show the UK spent £695 on social care per head of population in 2017.

Separate figures also expose a huge variation in the UK, with spending in England 43 per cent lower than in Scotland and 33 per cent below Wales.

Dementia patients are among the worst affected by the spending shortfall as they account for two thirds of patients who need social care, either in their own homes or in a care home.

Anita Charlesworth, of the Health Foundation, said: ‘When the current system is explained to people, almost everyone agrees it’s inadequate and unfair.

‘Social care funding has failed to keep pace with increasing demand of an ageing population and more working-age adults in need of care.

How to preserve the properties of polyphenols and flavonoids in oncological treatments?

Stress not a barrier to quitting the smokes
Family Health News