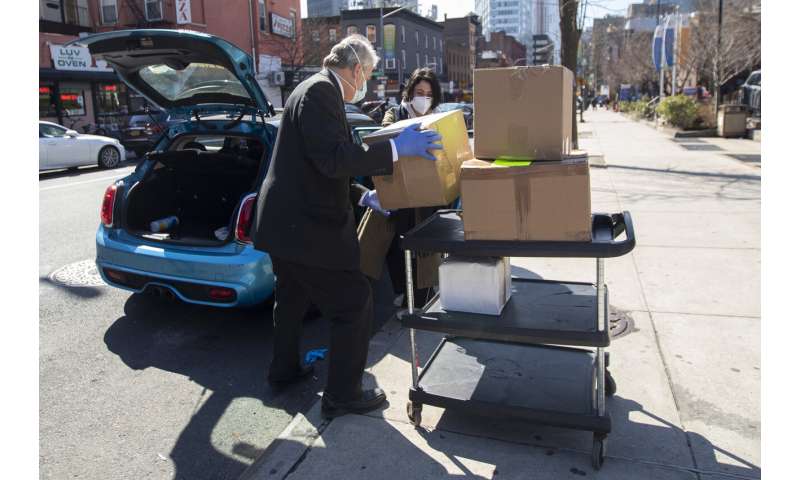 New York once again saw a spike in the number of deaths and hospitalizations related to the coronavirus, a bleak trend for the epicenter of the U.S.’s outbreak of the fast-spreading virus.

The increase in cases, deaths and hospitalizations comes as New York Gov. Andrew Cuomo detailed how the outbreak will have dramatic economic effects on the state.

Here’s a look at developments in the coronavirus outbreak Thursday.

Coronavirus deaths and hospitalizations in New York were both up dramatically, a stark sign of the outbreak’s quickly increasing reach.

New York state’s death toll from the coronavirus jumped by 100 in one day, pushing the number to 385, Cuomo said Thursday. He added that experts expect the number to increase as critically ill patients who have been on ventilators for several days succumb to the virus.

“That is a situation where people just deteriorate over time,” Cuomo said. “And that is what we’re seeing.”

There are now more than 37,000 confirmed cases in the state. The figure does not represent all COVID-19 cases, since an unknown number of infected people have not been tested.

More than 5,300 COVID-19 patients were hospitalized statewide as of Thursday, a 40% increase from the day before. Nearly 1,300 patients were in intensive care, a 45% increase. 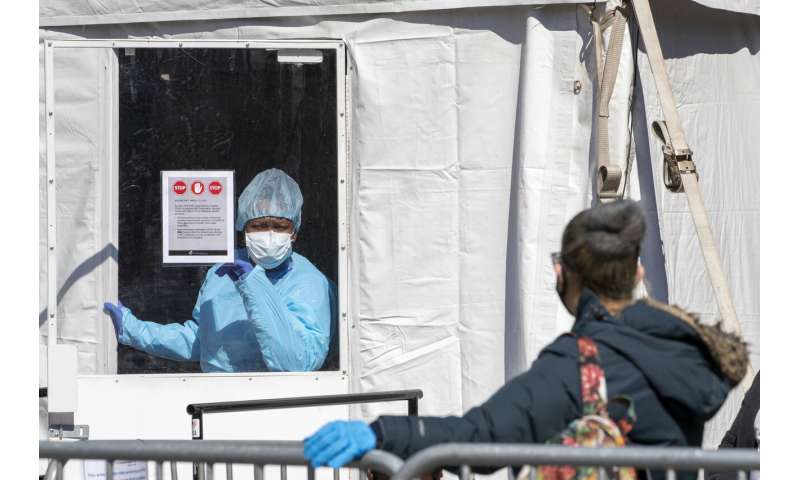 Hospitals in hard-hit New York City are trying to deal with the growing crush of patients and the need for medical equipment like face masks and ventilators.

The recent death toll includes a health care worker at one of the New York City hospitals under siege by the coronavirus has died, according to coworkers and his sister. Kious Kelly, an assistant nurse manager at the Mount Sinai West hospital in Manhattan, died Tuesday from the virus after he got sick two weeks ago, multiple friends said in social media posts.

Kelly’s sister, Marya Sherron, told the New York Post that her brother had informed her of his illness about 10 days earlier.

“He told me he had the coronavirus,” she said. “He was in ICU but he thought he was OK. He didn’t think it was serious as it was.”

Sherron said Kelly had severe asthma but was otherwise healthy. 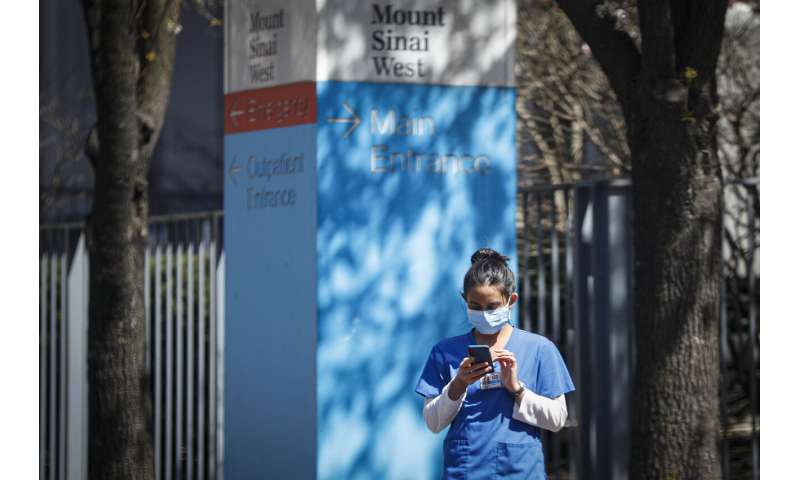 The head of a New York nurses’ union said not all hospital workers are getting needed protective equipment, despite assurances from the governor.

“In fact, personal protective equipment—from the hazmat suits seen in photos from around the world, to the impermeable disposable gowns, face shields and N95 respirators—the super-bare minimum needed to protect the nurses and patients from infection and/or exposure to COVID-19—are clearly not being made available in any meaningful way to front line caregivers,” New York State Nurses Association President Judy Sheridan-Gonzalez said in a prepared statement.

She said nurses are being asked to reuse that same disposable N95 mask for up to a week. 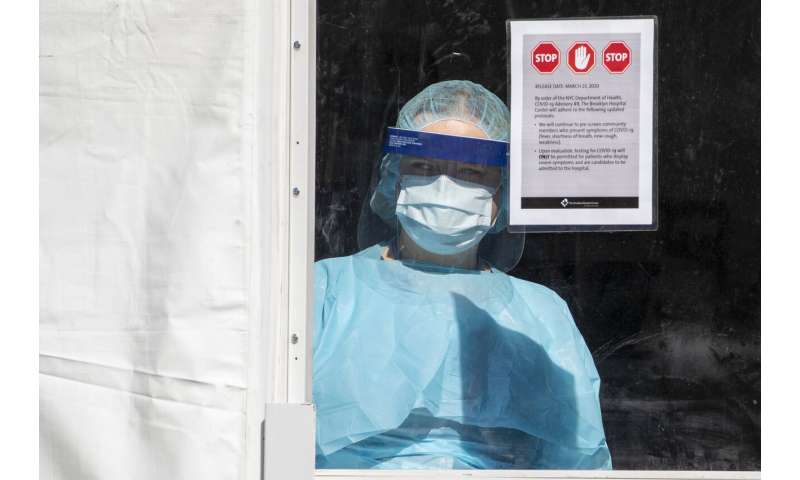 New York City wants to triple its number of hospital beds to 60,000 by May to deal with the surge of coronavirus patients, said Mayor Bill de Blasio.

De Blasio said more beds are already in the works thanks existing hospitals increasing their capacity and the pending conversion of a Manhattan convention center into a temporary hospital for non-COVID-19 patients.

New York City hospitals are already beginning to feel strains from the outbreak related to having enough supplies.

The city-owned hospital in Elmhurst, Queens, has been under particular stress, with the mayor calling it the “epicenter within the epicenter.” De Blasio said the city on Thursday sent 40 additional ventilators and 56 more staffers to the hospital.

“The folks doing this noble work need supplies,” he said, “and I’m committed on getting you supplies.” 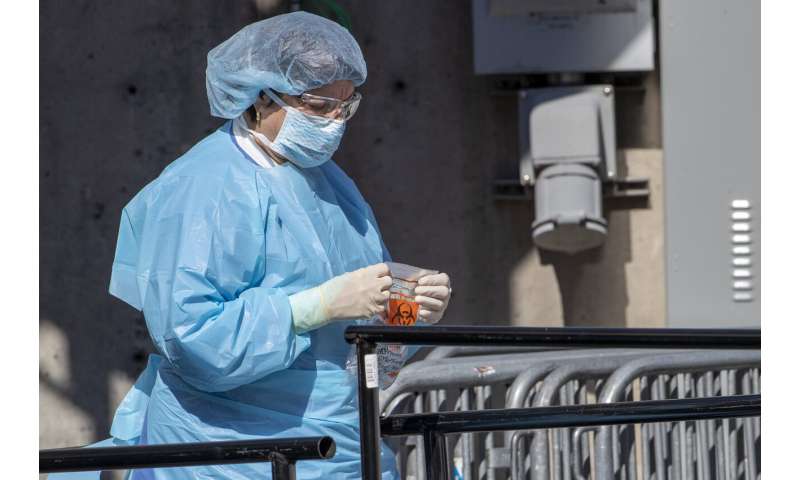 Also, the state is expanding its search for temporary hospital beds in the New York City region.

Cuomo said the state wants a 1,000-plus patient overflow facility in each of the city’s five boroughs along with Westchester and Rockland counties north of the city and Nassau and Suffolk counties on Long Island.

Cuomo said the state also is scouting dormitories and hotels for emergency beds.

Community leaders from Connecticut’s shores to the Adirondack Mountains are urging people heading to summer homes or vacation rentals to self-quarantine for 14 days when they arrive to avoid spreading the coronavirus.

“You and your families have a critical role to fulfill in halting the rapid spread of this virus,” the Essex County Board of Supervisors in the Adirondacks said in a statement this week. 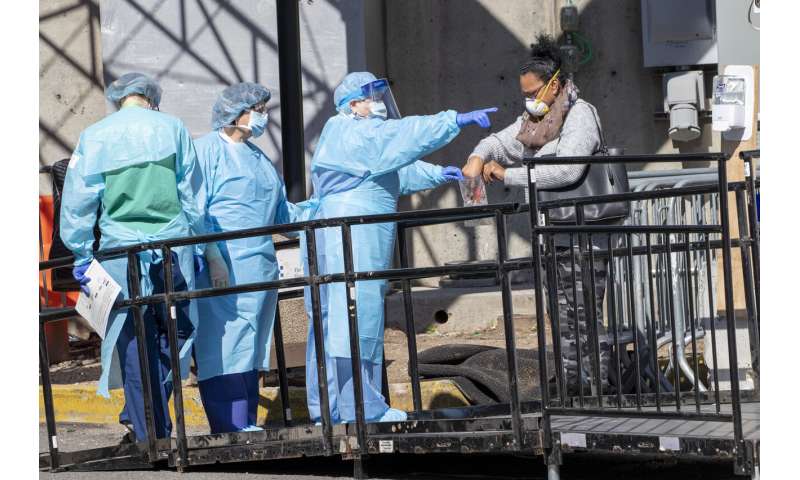 Leaders of several shoreline towns in Connecticut are also urging seasonal residents to self-quarantine for 14 days when they arrive. East Lyme First Selectman Mark Nickerson said there are reports of many people from New York and other places returning earlier than normal to summer homes in town.

In the Adirondacks, officials said the rural region has a vulnerable elderly population and few hospitals.

“It’s not to be offensive, not to be mean. It’s just common decency,” Tupper Lake Mayor Paul Maroun told the Adirondack Daily Enterprise.

Cuomo warned the economic toll of the coronavirus outbreak will be dramatic in New York and castigated federal officials for what he called a failure to address lost revenue in their $2.2 trillion relief package.

“The Congressional action, in my opinion, simply failed to address the governmental need,” he said Thursday at a state Capitol news conference. “I find it irresponsible. I find it reckless.” 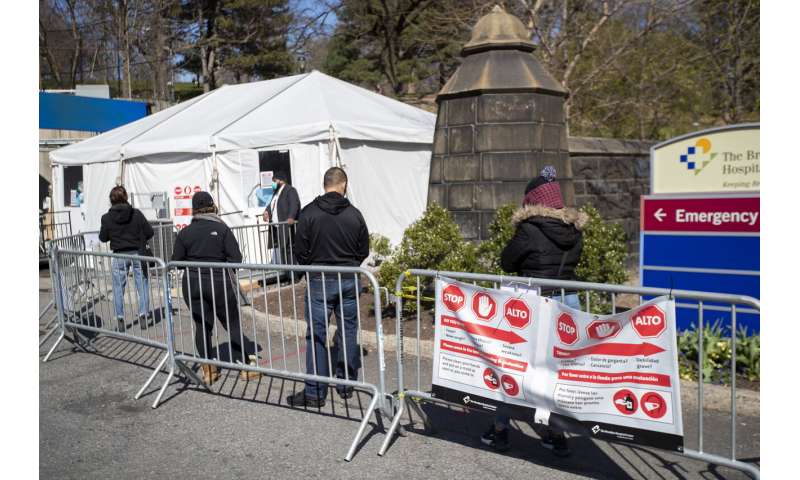 Cuomo said the outbreak creates a “double whammy” of increased state costs and lost revenue of up to $15 billion as businesses shutter and workers are laid off. The governor said the state will have to adjust its budget plan for the fiscal year beginning April 1 because revenue figures are so uncertain.

While the relief plan before Congress would fund COVID-19-related expenses, Cuomo said the larger issue is lost revenue. Sen. Chuck Schumer and others estimate New York will receive at least $7.5 billion in coronavirus relief funds.

Two field hospitals are on their way to New York City and will be able to begin treating patients at the Javits Center on Monday, U.S. Army leaders said Thursday.

The Army combat units from Fort Hood, Texas, and Fort Campbell, Kentucky, will include as many as 700 personnel and almost 300 beds. Those medical personnel will also be able to help staff additional beds being brought in by state and local authorities. 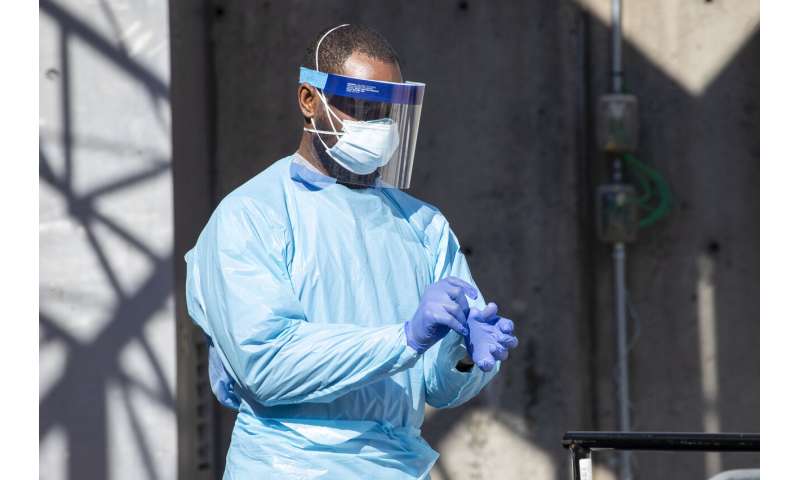 Gen. James McConville, chief of staff of the Army, said they will begin setting up the units this weekend at the center.