A staff sergeant steps onto a C-130 transport plane from Travis Air Force Base in Northern California, joining nearly 100 other fighters on a 13-hour flight to a US military base in South Korea.

As the jumbo jet roars into the sky, she touches a button on a small wristband strapped unobtrusively to her left arm.

Hormones flood into her blood stream. Within minutes, she is asleep, as are the rest of her platoon, who have performed the same brief gesture. Shortly before landing, the devices on their wrists will activate again, only this time, instead of promoting sleep, the surge of chemicals will clear the fog of jet lag by resetting their circadian rhythm to match the local time. When the soldiers arrive at their destination, they will be rested and mission ready.

If this scene sounds like what might wind up on a cocktail napkin after a bibulous party at the Pentagon — in a sense that’s true.

The technology — or something quite like it — is being developed by academic scientists in the United States working with the Defense Advanced Research Projects Agency, an arm of the US Department of Defense known for its high-tech, and often fantastical, ambitions. Notable spin-offs of DARPA projects include the internet, global positioning satellites, even Apple’s digital assistant Siri.

The vision of the program, called ADAPTER (short for ADvanced Acclimation and Protection Tool for Environmental Readiness), is to create the equivalent of a smart thermostat for the body that knows when to make you hotter or colder before you’re even aware the temperature is changing. Except in this case, the device doesn’t regulate heat; instead, it acts as a miniaturized pharmacy that can be programmed to control a range of physiologic activity.

Although the primary applications are military, the goals of ADAPTER have clear implications for civilians, said Paul Sheehan, PhD, a Harvard-trained physical chemist who oversees the $61 million program.

The two targets of the initiatives — traveler’s diarrhea and sleeping problems — have bedeviled soldiers for as long as humans have taken up arms against each other.

Sleep can be notoriously hard to come by in the military. The lack of slumber can significantly degrade performance, particularly if the disruptions become routine.

“You want everyone to work at their maximum capabilities,” Sheehan said. During the 1996 summer Olympics, a German national team scrambled by jet lag struggled for 2 weeks to recover its pre-travel level of performance. “Warfighters are athletes,” he said. “It’s a matter of life and death; they’re constantly struggling to get that quality sleep.”

At Stanford University in California, Alberto Salleo, PhD, chair of the Department of Materials Science and Engineering, heads a team of researchers who are creating an implantable pouch filled with cells capable of secreting melatonin that, when stimulated by electrical signals, will release the hormone into the body.

“The most innovative aspect of the system is that the cells produce the hormone on demand,” Salleo said. “They’re not your body’s cells,” he added. “In our case, they’re from rats.”

The melatonin the rats produce works just as well in humans as our own version of the substance. Salleo’s group — which includes scientists from the University of Vermont and Columbia University — has been working on ways to keep those cells, which they’ve harvested from the pineal glands of the rodents, alive in a hospitable jelly of chemicals.

Meanwhile, they’re also working on a sensor that can continuously monitor levels of melatonin so that the device knows precisely where in the circadian cycle the bearer is at a given moment, and when to alter the cycle.

The pouch itself is a particular challenge. It must be able to sit safely under the skin and be responsive to electrical signals. But the biggest hurdle is that the pouch must also have openings that are large enough for melatonin to escape, but small enough to prevent the infiltration of immune cells that might destroy the hormone factory inside.

The entire apparatus must be about a half-inch in size, weigh at most 10% of the rat host, and have safety features that allow it to be disabled should something go awry.

More than 15 months into the effort, the group has a line of cells that can produce melatonin in a lab dish but not in the pouch.

As currently designed, the device probably isn’t likely to be consumer friendly. “But the components — the sensor and the electronics — are the important thing and they could be part of a consumer product,” he said.

Salleo’s interest in the ADAPTER project stemmed from his earlier efforts to build biological sensors for various small molecules, particularly cortisol — the stress or “fight or flight” hormone. Eventually, he said, work on the DARPA initiative could incorporate his previous studies. The end product could modulate a broad range of biologically important substances.

“Imagine if you know your body is telling you that your level of stress is too high. What could you do to reduce it?” he said. “The idea that you can sense a panel of small molecules and then act on the physiology is very exciting for personalized medicine.”

Dion Khodagholy, PhD, associate professor of electrical engineering at Columbia University, New York City, said the program could help lead to improvements in artificial organs and implantable medical devices, such as the artificial pancreas for people with diabetes and deep-brain stimulators used to treat Parkinson’s disease.

In the case of the stimulators, for example, although the devices work well for a while, over time the brain forms scars that weaken the effectiveness of the treatment.

“Being able to have an implantable device with engineered cells that secrete relevant neuromodulators such as dopamine on demand would really advance this type of therapy,” Khodagholy said. A similar strategy might also help patients with epilepsy, for whom release of inhibitory biomolecules such as GABA may be able to block seizures when delivered to the pathologic tissue, he added.

Salleo’s group hopes to move from rats to pigs in the near future. Human studies testing the effectiveness of the technology won’t start for at least 4 or 5 years, Sheehan said.

In the Chicago suburb of Evanston, Jonathan Rivnay, PhD, MSc, has taken a different approach to the mission. Rivnay, an assistant professor of biomedical engineering at Northwestern University, and his colleagues also are building a wearable pharmacy that rests just underneath the skin. 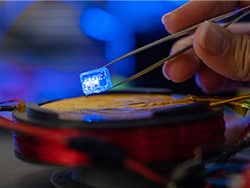 But inside the implant are retinal cells derived from humans that have been genetically modified to secrete the hormone leptin and several other molecules involved in regulating the circadian system. Unlike the Stanford team, the Northwestern group has chosen to use optogenetics — pulses of light that activate genes — rather than direct electrical stimulation as the means of communication with the cells in the pharmacy.

Optical induction allows for more specific activation of particular cells, as well as the ability to more easily incorporate multiple therapies from cells that respond to different wavelengths of light, Rivnay said. “Also, optoelectronic components like LEDs and photodiodes can be fully hermetically encapsulated, which would be beneficial for device lifetime and longevity,” he added.

As Salleo noted, a problem that has plagued cell-based therapies is how to keep those cells happy in the body long enough for them to deliver their therapeutic payload. Basic biology plays a role here: Cells require oxygen and nutrients to survive. But how to get them that food in an implant?

Rivnay’s group, along with colleagues at Carnegie Mellon University in Pittsburgh, turned to renewable energy research for their solution. Water splitting uses electricity to divide water molecules into their constituent oxygen and hydrogen. The result is a compromise: a tolerable level of oxygen with minimal changes in pH.

And, as with all military operations, keeping the supply lines open and operating efficiently is a critical concern. “We need to be able to deliver sufficient quantities of these therapeutic molecules and at the right time,” Rivnay said.

Working with experts in sleep biology at Northwestern, the team is using mouse models to narrow its therapeutic targets, pinpoint the optimal timing of administering those substances, and fine-tune dosages required to alter circadian clocks. “The leap from those experiments to what the cells can produce is an area of constant assessment in the project,” Rivnay said.

Staying off the Throne

For DARPA, diarrhea is no laughing matter. GI distress is a constant and costly campmate of GIs. In the first Gulf War, one third of US troops suffered serious bouts of diarrhea, which they contracted from food and water contaminated by germs and parasites. In the US Civil War, GI distress claimed an estimated 50,000 lives on both sides of the lines. The toll prompted Walt Whitman, a nurse during the conflict, to declare the “whole damned war business is about 999 parts diarrhea to one part glory.”

Giovanni Traverso, MB BChir, PhD, a gastroenterologist who holds appointments at Harvard Medical School and the Massachusetts Institute of Technology, leads the ADAPTER effort to develop an ingestible solution to traveler’s diarrhea.

Traverso’s team — which includes researchers at MIT, Brigham and Women’s Hospital, and University of Nevada Reno, as well as two private companies, Triple Ring and CBSET — is building on earlier work with the Gates Foundation on a capsule that can stay in the stomach for extended periods of time.

Made of a polymer, the device opens like a sea star in the stomach once deployed. Each arm can house reservoirs of Escherichia coli engineered to produce various antibiotic agents that elute into the GI tract on command to treat diarrhea.

So far, the group is developing antibiotics against species of Campylobacter, Salmonella, Shigella and several harmful forms of E coli. In some cases, the offending germ causes the diarrhea; in others, toxins generated by the organisms harm the gut. “The vision is to have a cocktail of therapeutics that would target a broad spectrum of both bacteria and toxins,” Traverso said.

After about a year of research, Traverso’s group has managed to keep the capsule intact and communicating with the outside world for several months in pig stomachs. They’ve used batteries to power transmissions but have also been exploring ways to use the mechanical or chemical energy of the gut itself to do that work.

DARPA requires that the device function for at least 2 months in the GI tract, a corrosive, highly humid environment that’s inhospitable to electronics. Traverso said the timeframe is key to the successful translation of military technology to useful application for civilian patients.

“If we think about really long-term treatments, we do want to have systems that stay in the body a long time,” he said. “We want to be able to build a platform that can help in many situations,” such as inflammatory bowel disease or other chronic conditions. “It could be long-term care, trying to titrate medication, or episodic treatment with immediate intervention.”

For the moment, if ADAPTER succeeds in solving the problem of traveler’s diarrhea, the mission will have been hugely successful. And the solution will be far more high-tech than what French King Louis IX is said to have resorted to during the 13th century Crusades, when he was so stricken with diarrhea that he removed part of his pants to make relieving the issue more efficient. “It’s a persistent problem,” Sheehan said.