Researchers at Washington University School of Medicine in St. Louis have received an eight-year, $8.8 million grant to study cells’ ion channels as potential targets for new drugs to treat disorders affecting the brain, heart and muscles. Ion channels are found in a variety of cells, where they are involved in the conversion of chemical and mechanical messages into electrical signals.

The grant, from the National Institute of Neurological Disorders and Stroke of the National Institutes of Health (NIH), was awarded to principal investigator Baron Chanda, PhD, a professor of anesthesiology. Chanda’s research probes the physical and chemical underpinnings of electrical signaling in cells, particularly in cellular ion channels.

“We’re trying to understand the molecular mechanisms that underlie the function of a variety of voltage-gated ion channels in cells,” he said. “These channels are involved in cardiac pacemaking, pain sensation, learning and memory, and their dysfunction can lead to diseases such as epilepsy and neuropathic pain, among others.”

Chanda’s lab focuses on a particular type of voltage-gated ion channel known as an HCN (Hyperpolarization-activated and Cyclic Nucleotide-gated) channel. These ion channels primarily are involved in reinitiating electrical activity and are found in excitable cells that exhibit rhythmic activity in the human body. For example, in the heart, modulation of HCN channel activity by chemical messengers and other proteins helps determine the frequency of the heartbeat. 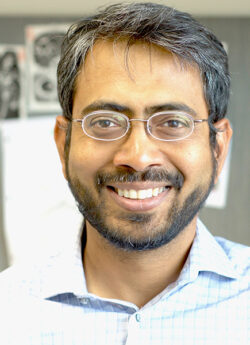 “We are developing single molecule techniques to understand how signaling molecules interact with these ion channels and gate them to open or close,” said Chanda, also a professor of biochemistry and of neuroscience. “These voltage-gated ion channels are involved in a variety of disorders related to cellular excitability. We think that gaining a more detailed understanding of the basic mechanisms involving how and why these channels open and close could lay the groundwork for the development of new therapeutics for problems ranging from cardiac arrythmias to seizure disorders.”