With the pressure of work, the demand of running a home and the challenge of raising a family, many struggle to find the time to exercise.

And this is often made worse by the long-standing belief that working out in the evening makes it more difficult to nod off.

By a new study suggests half-an-hour of high-intensity exercise in the early evening does not affect sleep and may even help us lose weight by suppressing our appetite. 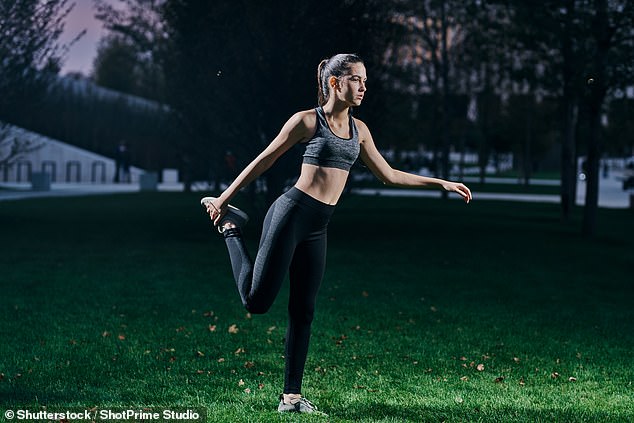 The research was carried out by Charles Sturt University in Bathurst, Australia, and led by Penelope Larsen, a PhD student at the school of exercise science, sport and health.

To determine whether exercising at different times of the day affects sleep, 11 middle-aged men were split into three groups that either worked out in the morning (6-7am), afternoon (2-4pm) or evening (7-9pm).

All of the participants completed the same work out – 30 minutes of cycling, made up of one-minute of maximum-intensity sprints followed by four minutes of rest.

After the work out, the men were asked how they slept that night.

Blood samples were also taken before and after the exercise regimen to measure the men’s levels of appetite-related hormones.

And it even has a beneficial effect on the hunger-stimulating hormone ghrelin.

The participants also exercised ‘harder’ with more ‘power output’ in the afternoon and evening.

The researchers stress this single session of exercise was not enough for the men to report any change in how hungry they felt.

It may also not be possible to apply the study’s findings to other people, given that metabolism is influenced by both age and sex.

‘In the future, we hope to conduct similar studies recruiting women, to determine whether sleep and appetite responses may be different depending on sex,’ Ms Larsen said.

‘Also, this study only considered a single bout of exercise; therefore, it would be beneficial to investigate long-term sleep and appetite adaptations to high-intensity exercise training performed either in the morning, afternoon or evening.’

SHOULD YOU DRINK BEETROOT JUICE BEFORE EXERCISE?

Drinking beetroot juice before exercise could take years off your brain, research suggested in April 2017.

Combining the drink with exercise strengthens certain regions of the brain, making it appear more youthful and potentially preventing the organ’s decline, a study found.

This finding could help people who are at risk of brain deterioration to remain functionally independent, such as those with a family history of dementia, according to the researchers.

Drinking beetroot juice before exercise could take years off your brain

Beetroot juice’s power likely lies in its nitric-oxide content, with past research suggesting this both increases blood flow to the brain and improves exercise performance.

Study author Professor Jack Rejeski, from Wake Forest University, North Carolina said: ‘Nitric oxide is a really powerful molecule. It goes to the areas of the body which are hypoxic, or needing oxygen, and the brain is a heavy feeder of oxygen in your body.

‘Compared to exercise alone, adding a beetroot juice supplement to exercise resulted in brain connectivity that closely resembles what you see in younger adults.’

The researchers analysed 26 men and women aged 55 and over who did not exercise and had high blood pressure.

Some participants were given beetroot juice one hour before walking for 50 minutes on a treadmill, while others did the same exercise but without the drink. This was repeated three times a week for six weeks.