The nurse let down by NHS she loved: Grieving husband calls for full inquiry after mother-of-two, 49, dies of cervical cancer despite being given the all-clear SIX times

Julie O’Connor, who worked for the NHS for 13 years, was mistakenly told six times that she did not have cervical cancer. In the heartbreaking video, the 49-year-old sits propped up in her hospice bed and is able only to whisper.

‘It’s disgusting I have been suffering the way I have and I continue to suffer,’ the mother of two says.

As she struggles to continue, her husband Kevin tells the camera that a series of doctors failed over three years to diagnose her illness.

‘We hold them fully accountable,’ he says. ‘The pathologist and the gynaecologist, who had several opportunities to intervene, I hold them responsible, and I do hold the board of directors at North Bristol Trust accountable.

‘They put me and Julie through this. What we want to do with this video is to show the board of directors what they’ve done. What they’ve done to me and Julie and our family. And I just hope this doesn’t happen to anybody else. We want a wider review.’ 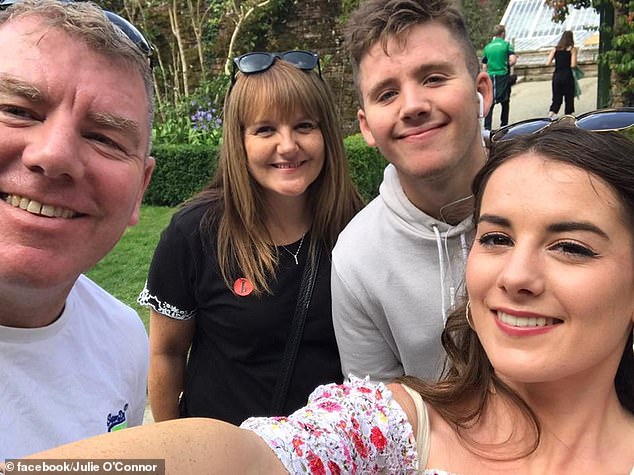 The O’Connor family (Julie, Kevin and their two children) were devastated by the cancer diagnosis after the hospital said it was something else 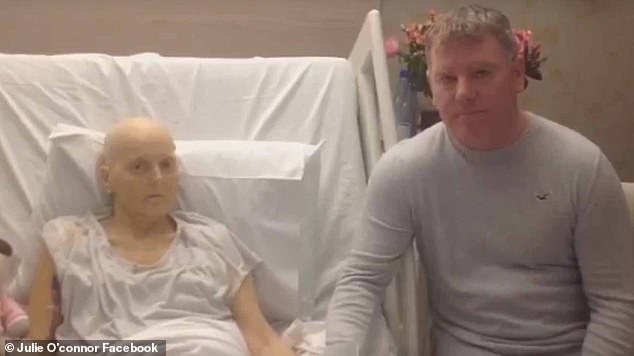 Misdiagnosed: Kevin O’Connor (right) and his wife Julie, who died of cancer earlier this month 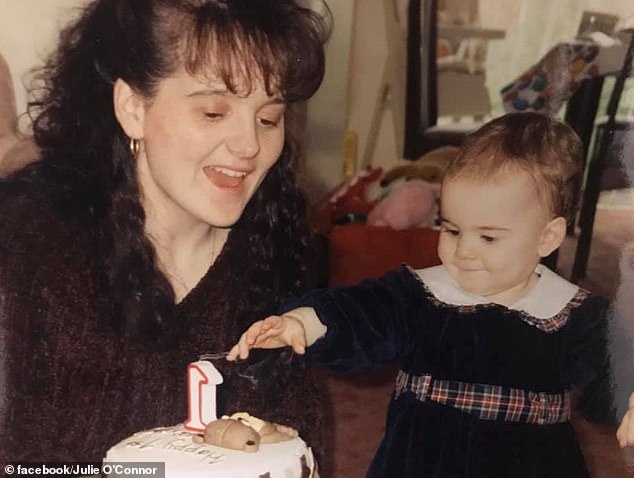 Mrs O’Connor died just three days after filming the video. She was assured she did not have cervical cancer following a smear test, biopsies and numerous clinical examinations. It was only when she went to see a private consultant three years after the original missed diagnosis that she learned the truth.

By then it was terminal. She died last week at St Peter’s Hospice in Bristol.

Her family, who believe other cases of cancer in women may have been missed, are campaigning for an independent review into cervical smear screening at Southmead Hospital, which is run by North Bristol NHS Trust.

Mr O’Connor, a public safety regulator, said: ‘We don’t think it’s isolated. We think there is a systemic problem there. No one person can be that unlucky to have a misdiagnosed smear, missed biopsies and all these clinical examinations and we’re talking senior members of staff.

‘We want to look forward, but we also have to look back and work out if there are other victims out there – that’s what Julie wanted to do.

‘It’s been so frustrating just to get the trust to listen. It has just felt like they are in denial.

‘There needs to be an independent public inquiry – that is the only way we are going to get to the bottom of it.

‘She was let down by the NHS. That’s why we went private in the end. We don’t want it to happen to anyone else.

‘It was the arrogance of the board of directors which did upset Julie as well, the pointing the finger at the GP and at everyone else.’

Mrs O’Connor went to Southmead for a smear test in September 2014 after moving to Thornbury in South Gloucestershire.

The test came back negative, although samples sent later for independent analysis showed signs of cervical cancer. A year after the smear test Mrs O’Connor suffered persistent bleeding and her GP referred her for further assessment.

Despite biopsies and medical examinations over the next two years she was repeatedly told she did not have cancer. In 2017, when doctors put her on a ‘cancer pathway’ to test for the disease for a third time, Mrs O’Connor decided to see a private consultant.

Her husband recalled: ‘Within ten seconds of being there the senior gynaecologist said “How could anybody have missed this?” He said it was a 4.5cm tumour and he had actually struggled to get a camera inside, it was that bad.’ He added: ‘Whilst North Bristol Trust have accepted negligence they need to look at the bigger picture now. Are there more victims out there? There are seriously, fundamental failings within North Bristol Trust cervical cancer screening and we just don’t want this to happen to anyone else.’

Mrs O’Connor’s daughter Sophie, 22, said her mother was ‘really passionate’ about women being smear tested. She added: ‘People are scared to have it done, but mum has always been really passionate. She didn’t understand why people didn’t get it done. I know some people think it’s scary, but after seeing my mum I just think it’s curable if you catch it in time.’ 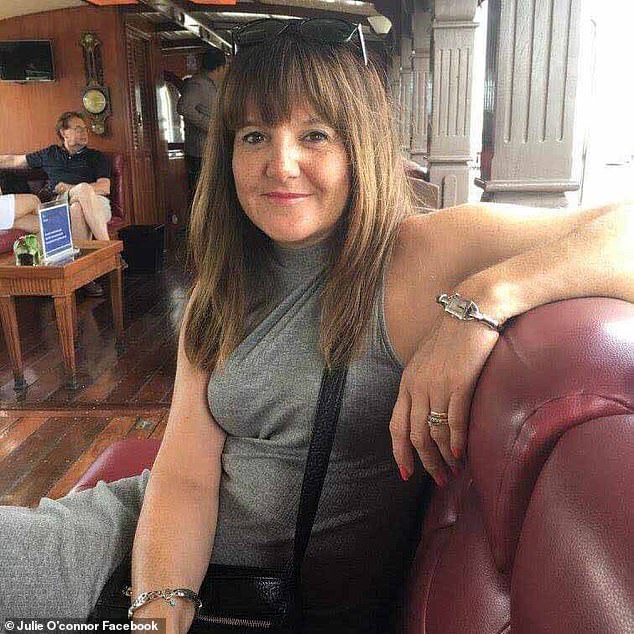 Too late: Ms O’Connor was finally given a correct diagnosis when assessed privately, some three years after her initial smear test in 2014 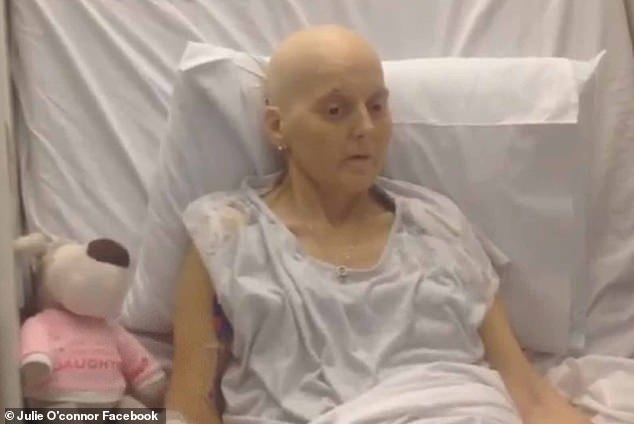 North Bristol NHS Trust later admitted liability and offered monetary compensation, but now the family fear other women may also be at risk

Mrs O’Connor, who attended Liverpool John Moores University, spent 13 years working for the NHS Arrowe Park Hospital on the Wirral, where she was a sister on an intensive care unit.

After moving to Germany with her husband, she took up a position as an international school nurse, where she worked for almost six years.

When they returned to the UK, Mrs O’Connor worked as the theatre recovery lead at Emersons Green Treatment Centre, an NHS healthcare centre which is run by Care UK.

North Bristol Trust has commissioned an independent review of the investigation it carried out into Mrs O’Connor’s care.

It has admitted negligence relating to the delayed diagnosis of cancer and a spokesman said solicitors were working towards a settlement.

Dr Chris Burton, the trust’s medical director, said: ‘We are extremely sorry to hear that Mrs O’Connor has died.

‘We have her family in our thoughts at this very difficult time and we send our deepest condolences. We are committed to understanding the full circumstances of the care we provided so we can improve our services for the future, and we will be publicly open with the overall findings of the independent investigation we have commissioned. I have met with Mr O’Connor and will remain in contact with him.’

Women aged between 25 and 49 are invited for screening every three years, rising to every five years for women aged 50 to 64.

But a National Audit Office report earlier this month found that just a third of patients received their test results within the recommended two weeks, with some left waiting an agonising four months.

The cervical screening uptake in Britain is at an all-time low of just 71 per cent, with five million women overdue for testing.

WHAT IS CERVICAL CANCER? AND HOW DOES OBESITY CAUSE THE DISEASE?

Cervical cancer affects the lining of the lower part of womb.

The most common symptom is unusual bleeding, such as between periods, during sex or after the menopause, but other signs can include:

Being overweight or obese can double a woman’s risk of cervical cancer, research suggests.

This is due to excessive fat leading to higher levels of the hormone oestrogen, which is associated with the disease.

Other causes can include:

In the UK, the NHS invites women aged between 25 and 64 for cervical screening, known as smear tests, every three-to-four years.

This aims to pick up abnormal cells that could lead to cancer if left untreated and saves at least 2,000 cervical cancer deaths a year in the UK.

These abnormal cells can be destroyed by methods such as laser therapy or freezing treatment.

Since 2008, girls aged 12-to-13 have been offered an HPV vaccine, which protects against more than 70 per cent of cervical cancers.

If diagnosed, treatment depends on where the cancer is, if it has spread and the patient’s general health.

Surgery may be required, which usually removes the womb and cervix. Enough can sometimes be left so a woman can still get pregnant.

In more advanced cases, a combination of chemo, radiotherapy and surgery may be required.