In the midst of a national shortage of N95 masks, the U.S. government quietly granted an exception to its export ban on protective gear, allowing as many as 5 million of the masks per month to be shipped overseas.

The Federal Emergency Management Agency issued the waiver in the final moments of Donald Trump’s presidency last month, allowing a Texas company to export its products after it failed to secure U.S. customers, according to the FEMA letter obtained by KHN.

National Nurses United president Zenei Triunfo-Cortez called the export waiver “unconscionable” and said N95s remain under lock and key in many hospitals. She said she still has to “beg” for a new N95 if hers gets soiled during a shift caring for covid-19 patients.

Health care employers “and a federal agency that is supposed to be protecting the people of America are not doing their jobs,” she said. “They have no regard for our safety.”

The disconnect between front-line workers going without better protection and federal officials suddenly exporting masks boils down to one thing, workplace-safety experts say: The government has not pivoted quickly enough to lift supply chain crisis-mode guidelines and force employers to take costly and sometimes cumbersome steps to better protect workers with top-quality gear.

The FEMA letter references the challenge that Fort Worth-based Prestige Ameritech faced in finding customers for its government-approved, high-end respirators: Hospitals did not want to “fit test” employees to its N95s, a 15-minute process per employee to ensure that a new N95 model seals to the face, according to company president Mike Bowen. 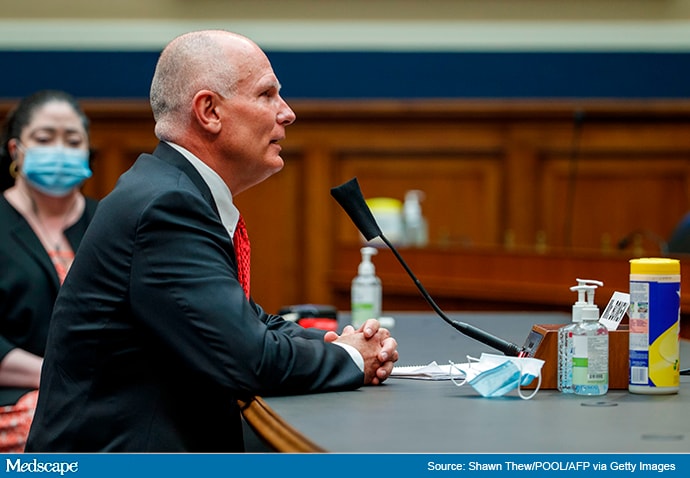 Prestige Ameritech’s Mike Bowen testifies before the House Energy and Commerce Subcommittee on Health hearing to discuss protecting scientific integrity in response to the covid pandemic.

Bowen said he ramped up N95 production during the pandemic from 75,000 to 9.6 million per month. Lately, he said, he can’t sell them to major buyers, does not have the infrastructure to sell them to small buyers and has so many in storage that he may need to lay off workers and wind down production.

The FEMA letter references those challenges and says the waiver was granted in the “national defense interest” to ensure he keeps production running at pace. The letter was transmitted to Border Patrol officials who oversee exports 103 minutes before Joe Biden was sworn into office.

Yet even with the waiver, Bowen said, he hasn’t been able to find an overseas buyer. He said he can’t understand the contradictory information he’s getting: Front-line workers say they need more N95s, but hospitals say they don’t.

“There is a disconnect someplace, and I don’t know where it is,” Bowen said. “Why aren’t my phones ringing off the hook if there’s a shortage?”

A FEMA official said by email that the waiver could be revoked at any time if U.S. demand increases and that the agency could require the company to “satisfy domestic demand” before exporting N95s.

Although prices fall considerably for those buying in bulk, prices for smaller lots of N95s have reached $4 to $7 each, according to Get Us PPE, a nonprofit meant to match front-line workers with needed gear.

The requirement for employers to perform fit tests annually was set aside amid the public health emergency, giving employers little incentive to veer from the industry-standard models like 3M that were used for years. And the Centers for Disease Control and Prevention has left guidelines in place that say a limited cadre of health care workers should get N95s, which can be reused and rationed.

That adds up to an unusual situation in which U.S. mask supplies have surged, but employers’ motivation to buy the best protective gear has not, said Peg Seminario, a former union health and safety official who recently signed a letter urging the CDC to update its guidelines to reflect the risk of inhaling the virus.

“This is crazy,” she said. “We could … crush this pandemic where the biggest risks of infection are and we’re not doing it.”

Started by a group of emergency room doctors in March, Get Us PPE said it gets 89% of requests for gear — often N95s — from health workers outside of hospitals, like community clinics, covid testing sites and psychiatric care facilities. Demand rose throughout January, with 28% of front-line workers seeking N95s reporting that their site had none.

Yet the volunteer-run group has been able to fulfill only about 15% of the requests it receives. Dr. Ali Raja, a founder of the group and executive vice chair of the emergency department at Massachusetts General Hospital, said the need is vast outside of hospitals, but small facilities scrambling for gear are not connecting to bulk sellers like Bowen’s firm.

“There was nothing out there — no centralized place for all facilities to report PPE needs,” Raja said. “We don’t want to be the website with the best data on this. We want that to be the federal government.”

On the last day of 2020, FEMA extended its rule prohibiting anyone from exporting PPE, including N95s, without first getting express approval from the agency. The rule says the fall and winter surge in covid cases meant “domestic supply of the allocated PPE has not kept pace with demand and is not anticipated to do so.”

The U.S. Strategic National Stockpile has not yet met its goal for N95 respirators, according to a U.S. Government Accountability Office report. The report said that as of Dec. 18, there were 190 million N95 respirators in storage — well short of its goal of 300 million.

Another twist to the saga is that millions of counterfeit N95s stamped “3M,” an industry standard that has long been used in previously required annual fit tests, have flooded hospital shelves even as federal agents rush to seize them at U.S. ports.

A prominent group of scientists wrote to the CDC on Monday to point out guidelines that urgently need to be changed to protect workers from inhaling tiny airborne virus particles. Their letter noted that the “CDC does not recommend the use of N95 respirators” outside health care settings, even though outsize risks are documented for bus drivers, prison guards and meatpacking staffers.

CDC guidelines also allow hospitals to limit which workers get the N95s, leaving out those in community settings and lower-level workers who typically spend the most time next to patients.

In the Lost on the Frontline project, KHN and The Guardian have documented the deaths of hundreds of more than 3,440 front-line health workers, of whom 2 in 3 were workers of color and 56% worked outside of hospitals. For more than 120 who died, family members had concerns about PPE, including the extensive reuse of N95s or the use of surgical masks for direct care of covid patients.