Women who are impregnated with sperm which has been frozen for up to 15 years are just as likely to get pregnant, a study has found.

Whether semen is frozen for six months or more than a decade appears to make no difference to the chances of having a baby.

Men can freeze their sperm to start a family later in life, as women also freeze their eggs. But after 10 years in Britain, stored sperm is destroyed.

Researchers analysed a total of 119,558 semen samples at The Human Sperm Bank in Changsha-Hunan, China.

Sperm are contained in liquid nitrogen which has a temperature of -196°C (-321°F), and are essentially in a state of suspended animation. 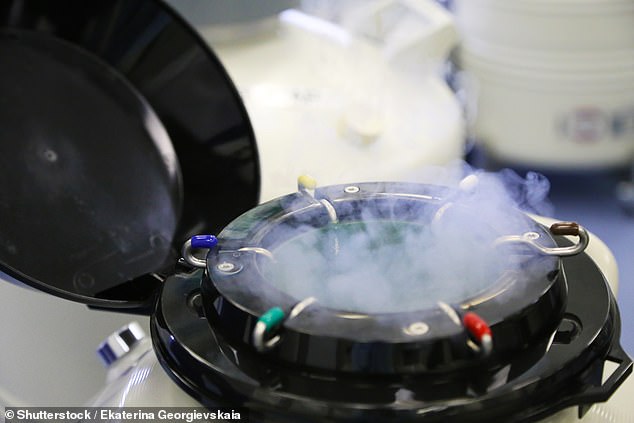 Women who are impregnated with sperm which has been frozen for up to 15 years are no less likely to get pregnant, a study has found

However, this decline made little difference to the pregnancy and live birth rate in women using these samples for donor insemination.

In the three storage groups respectively, there were cumulative live birth rates of 82.17 per cent, 80.21 per cent and 80 per cent.

Success rates were similarly comparable when the frozen sperm samples were used in IVF, with live birth rates of 81.63, 79.11 and 73.91 per cent, respectively.

The authors stress these very high success rates were achieved with screened donor sperm, which is not necessarily representative of the general population.

WHO CAN FREEZE SPERM AND HOW LONG IS IT KEPT?

Men may consider freezing their sperm if:

They have a condition, or are facing medical treatment for a condition that may affect fertility – such as cancer.

They are about to have a vasectomy and want sperm available in case they want to start a family later.

They have a low sperm count or the quality of the sperm is deteriorating.

They are at risk of injury or death, for example if they are a member of the Armed Forces.

If they are a male transitioning to a female and they want to preserve their fertility before starting hormone therapy or having reconstructive surgery. Both treatments can lead to the partial or total loss of fertility.

How long can it be frozen?

The standard storage period for sperm is normally 10 years, although men in certain circumstances can store their sperm for up to 55 years.

Dr Chuan Huang, who led the study, said ‘that the long-term storage of sperm does not appear to affect live birth rates’.

Results of the study were presented at the European Society of Human Reproduction and Embryology annual meeting in Vienna.

Allan Pacey, Professor of Andrology at the University of Sheffield, said the findings aren’t particularly unexpected.

He told MailOnline: ‘We know sperm in humans has been frozen and then thawed and used successfully after 20-plus years.

‘We know in the cattle breeding industry that sperm have been thawed and used 50-plus years after freezing.’

Many countries put a time limit on how long eggs and sperm can be frozen, after which they will be destroyed.

Under British law, eggs and sperm storage is capped at 10 years, which has been heavily criticized by campaigners who say there is a rush to use the sperm or eggs before they are left to perish.

Only in special medical circumstances are men or women able to store their sperm or eggs for up to 55 years.

There is no clear explanation for any these time limits, but it is suggested by some experts that the time limits were set in fear that the sperm cells might be at risk of DNA damage – but there has been no evidence of this.

Professor Pacey said the limits are likely for political reasons in each country, not biological ones.

Treatment with frozen sperm is just as successful as treatment using fresh sperm, according to the Human Fertilisation and Embryology Authority.

But some studies have shown that some sperm cells do not survive the freezing and thawing process.