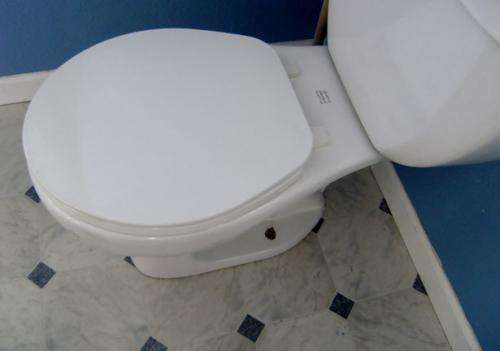 Would you let a disease-detecting toilet scan your anus in the name of health?

The smart toilet automatically analyzes all urine and stool deposits and alerts your doctor if you’re sick.

It can detect diseases ranging from some cancers to irritable bowel syndrome.

The technology promises to be affordable and can be easily mounted inside the bowl of an existing toilet.

But its success depends in part on whether we can get over the ‘ick’ factor of answering nature’s call on camera.

The proof-of-concept system unveiled by Stanford last year is fitted with a suite of different health gadgets.

The toilet uses pressure and motion sensors to deploy things like dipstick tests for urine analysis. It can measure white blood cells, blood contamination, levels of certain proteins and more. And it could detect a variety of health problems from infection to bladder cancer or kidney failure.

At its current level of development, the system can measure 10 different parameters.

The video is processed by algorithms that can distinguish normal ‘urodynamics’ – like flow rate, stream time and total volume—from those that are unhealthy.

The toilet also captures stools with a defecation-monitoring camera to classify them on the Bristol stool scale.

To determine who’s on the loo at any given moment, the toilet has a built-in identification system.

It scans a user’s fingerprint and “analprint.”

The researchers who developed the toilet say the scans are used purely for recognition.

They say no one—not the user or their doctor—will see them.

Any health data collected will be sent to a secure cloud-based system for safekeeping.

Ideally, any concerning results—like blood in the urine—would trigger an alert to the patient’s healthcare team via a privacy-protected app.

Health professionals could then take steps towards a proper diagnosis.

Last year, 21 people tested the toilet over several months as part of a pilot study.

The research team also surveyed 300 prospective smart toilet users at Stanford to see if people would be willing to bare it all in the name of health.

About 7% said they felt ‘extremely uncomfortable’ with the idea.

Unsurprisingly, the most accepted tool was the dipstick tests, while the majority of people could do without the analprint scans.

Still, when asked “Would you feel comfortable with a camera in the toilet bowl that captures stool images and pictures of your anus?” a little over a third of the respondents said yes.