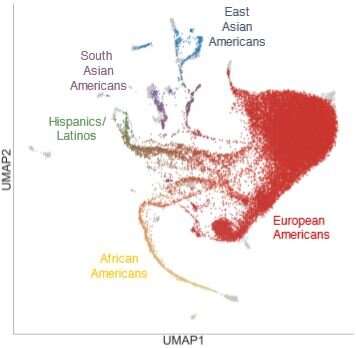 Researchers have assembled one of the most comprehensive studies of population genetics ever conducted in the United States, bringing together large-scale genetics data from more than 32,000 participants in the National Geographic Genographic Project. This new view on the US, appearing March 5 in the American Journal of Human Genetics, reveals a remarkable degree of complexity. Beyond offering an intriguing view of the nation’s recent history, the findings also have important implications for health and medicine, the researchers say.

“We have inferred US demographic history at fine scale by combining genetic, geospatial, and multigenerational birth record data,” says Alicia Martin (@genetisaur) of the Broad Institute of MIT and Harvard. “This provides important lessons for the future: if we want genetic technologies to benefit everyone, we need to rethink our current approach for genetic studies because they typically miss a huge swath of American—and more broadly human—diversity.”

Although much effort has been made to understand the genetic diversity in theUS, fine-scale patterns were less clear for minority populations, particularly for Latin American and African descendants with complex ancestral histories. There also had been little research on the population structure of individuals in the US with East Asian, South Asian, and Middle Eastern ancestry.

Martin and colleagues report that the new effort had several distinct advantages compared to other large-scale population genetics datasets. First, genetic data for each consenting participant from the Genographic Project are accessible to researchers around the world to answer anthropological questions. Most of the study’s participants also reported their postal code along with birthplace and ethnicity data for themselves, their parents, and their grandparents, enabling fine-scale insights into recent history.

Their analysis revealed the following:

Martin also noted that Hispanic/Latino populations have native origins spanning North, Central, and South America over several generations. These roots vary in how much and how long ago they appear in Californians, New Mexicans, Texans, and Floridians on average.

The researchers say that these findings are “the tip of the iceberg.” As the number of participants in this and other ongoing studies continues to grow, the view of US population history will become even clearer.