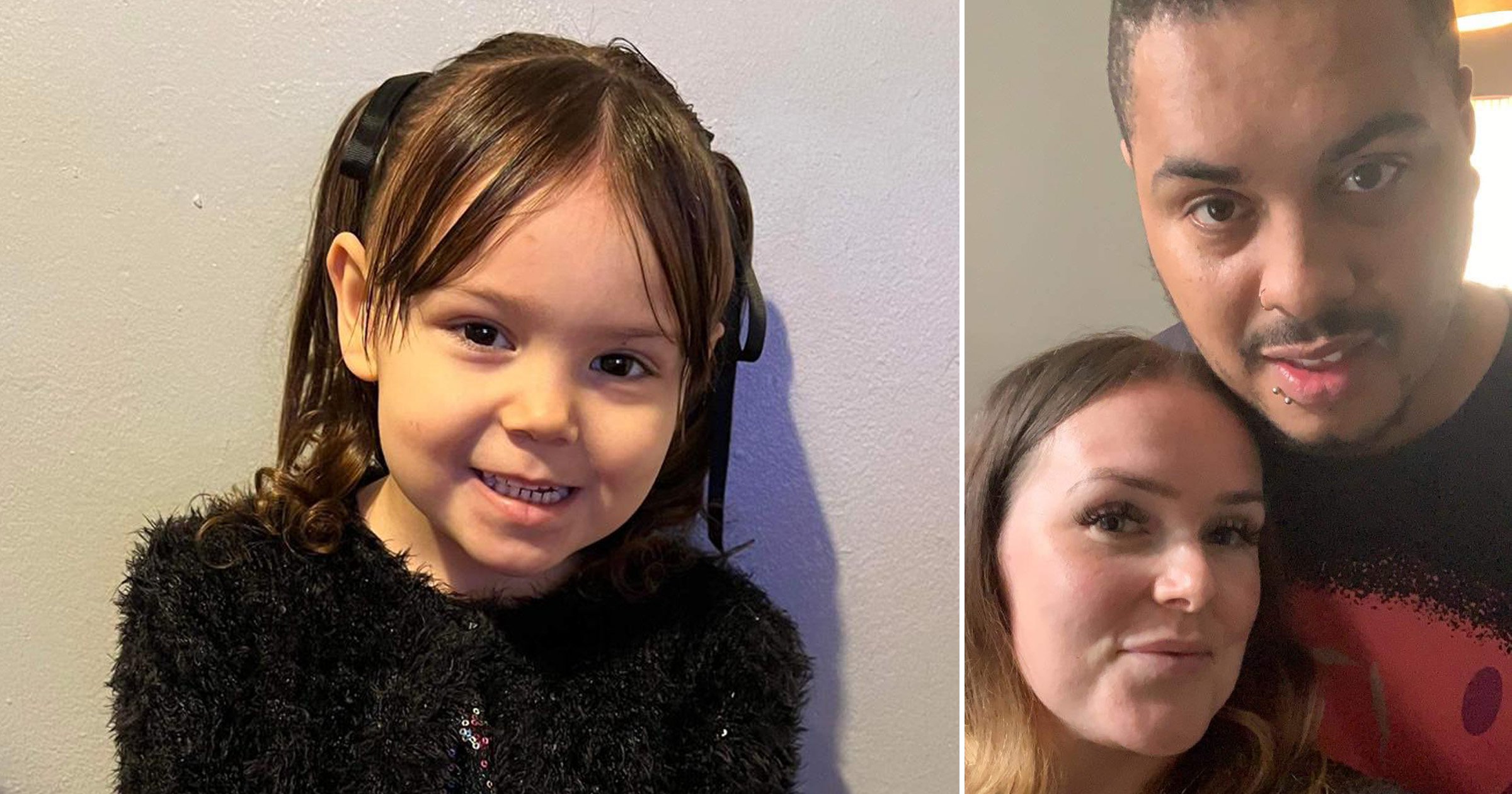 Kyra Lorde’s parents thought their little girl was poorly with the flu when they took her to hospital on January 2, this year.

The four-year-old had a temperature, a cough, and was having difficulty eating just days after Christmas.

But when her parents took her to hospital, they were devastated to learn that their daughter was in fact battling a rare form of leukemia.

Mum, Kirsten, from Manchester, explained: ‘Kyra had a high temperature that we had tried to get on top off with medicine.

‘We had a normal Christmas and New Year and a big family party. Everything was fine. We didn’t realise how serious it was and just thought it was a chest infection or flu.’

But a couple of days later, Kyra’s condition seemed to get worse.

‘A couple of days after, she started saying she didn’t feel very well, but there were so many bugs going around over winter, and she was still eating.

‘But on January 2 she just took a strong dive and got very upset, saying her legs and back were hurting. We couldn’t get on top of her temperature and knew something wasn’t quite right, so agreed to take her to hospital.’

Her dad, Josiah, took Kyra to hospital to be checked over by a doctor where she was initially assessed.

But soon, the little girl was being treated by specialists after her oxygen saturation levels plummeted.

Pregnant Kirsten, who was desperately trying to organise childcare for her other five children, raced to the hospital and arrived as doctors were cannulating the youngster and taking blood tests.

‘We just wanted them to do whatever they could,’ explains Kirsten. ‘They had been taking blood samples and doing lots of tests to find out what the infection was and what was wrong with her.’

It was then that doctors told Kirsten and Josiah that they suspected Kyra could have leukaemia.

‘We couldn’t believe it. There was just no way,’ Kirsten added. ‘There were loads of different illnesses going round, especially with children catching the flu. Even the possibility of it being leukaemia was devastating.’

Kyra spent the night in hospital with her parents by her side. The following day, the devastating news was confirmed – their little girl had acute lymphoblastic leukaemia, a rare type of cancer that affects white blood cells. It progresses quickly and aggressively and requires immediate treatment.

Kirsten adds: ‘It took us by surprise, especially because of how she had been a couple of days earlier, laughing and smiling. It’s broken us.’

Kyra, was excited to return back to nursery to show her friends the tablet and doll that she had been given for Christmas, but has remained at Manchester Children’s Hospital.

Mum Kirsten, who is currently on maternity leave preparing for her seventh child and due to give birth within weeks, said the youngster is ‘really confused’ and ‘just wanting to go back home’.

Kyra has since started chemotherapy, had a bone marrow sample taken as well as a lumbar puncture.

Over the next five weeks, the youngster will remain in her hospital bed receiving rounds of chemotherapy to see how her leukaemia reacts to the treatment. She will also have regular bloods taken, with treatment possibly lasting up to three years.

Kirsten added: ‘We kept asking the doctors if there was anything we could’ve picked up on. They told us she could’ve had it for up to two weeks. If she hadn’t have gotten ill, we may not have known and it may have been to late. It is so much to take in.

‘She doesn’t know what’s going on. She is really confused and just wants to go home, it’s breaking our hearts. When the doctors come in with masks she thinks they’re going to hurt her.’

‘Thankfully, the leukemic cells are not in her spinal fluid and it is curable, but each case is different,’ says Kirsten.

‘A lot of people have said if we’d have just put off taking her to hospital, thinking it was just a cold, it could have been a lot worse.

The NHS states that one of the biggest factors that affects the outlook for people with acute lymphoblastic leukaemia is their age. The younger a person is when they are diagnosed and treatment begins, the better the outlook.

From the available data in England it is estimated that, in those aged 14 or younger, more than 9 in 10 will survive for five years or longer after diagnosis.