A powerful environmentally-friendly inhaler could be on the market in just five years’ time.

A pharmaceutical company in Italy is developing a product which it says could cut the carbon footprint of the vital asthma devices by 90 per cent.

Chiesi Farmaceutici said it is creating a new type of propellant which cuts out most of the 500g of carbon dioxide produced by a single puff of a normal inhaler.

Patients have in the past feared different chemicals may not be as effective as what is currently used, potentially putting their health at risk.

But Chiesi insists that its ‘green’ inhaler would work just as well and be a ‘seamless transition for patients’. 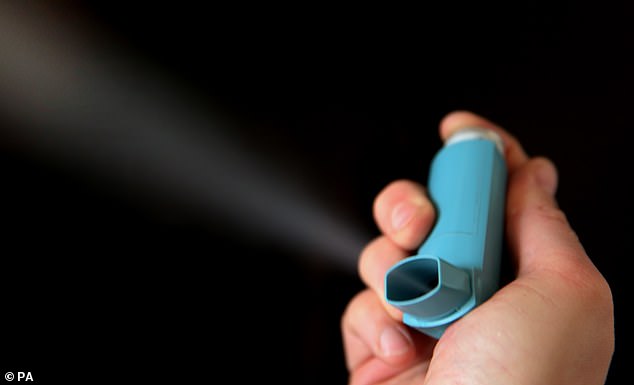 A single metered dose inhaler can release as much as 25kg (55lbs) of carbon dioxide into the atmosphere every year, according to research published in the British Medical Journal (stock image)

Around 5.4million people in the UK – one in every 12 – and 25million in the US receive treatment for asthma, the majority of whom have inhalers.

The devices are pointed into the mouth and deliver a blast of medication to the lungs to relax them and make it easier to breathe.

Environmentally-friendly ones do exist but work differently – they are known as a ‘dry powdered’ inhaler rather than a ‘metered dose’, which is the most common type.

A single metered dose inhaler can release as much as 25kg (55lbs) of carbon dioxide into the atmosphere every year, according to research published in the British Medical Journal.

Whereas the dry powdered inhalers release about 37 times less carbon – around 20g per dose – but are less powerful and only suitable for milder asthma.

The UK health watchdog, the National Institute for Health and Care Excellence (NICE), this year told people with asthma to try and use environmentally-friendly inhalers if they could do so without endangering their health.

Five doses from a metered dose inhaler – the most commonly used type – can have the same carbon emissions as a nine-mile (14km) trip in a car, it said.

Metered dose inhalers contain around 100 doses, meaning by the time they are empty they have emitted the same amount of carbon as a 180mile (290km) car trip.

They produce some 500g of carbon with each puff.

By comparison, dry powder inhalers contain just 20g of carbon dioxide per equivalent dose and work well for many patients.

This would mean that 100 doses of a dry powder inhaler would be equal to a car journey of just 7.2miles.

They aren’t as powerful, however, and rely more on the patient breathing in the drug so are unsuitable for severe cases.

Chiesi said its green inhaler will be a combination of the two; the effectiveness of a metered dose with the low carbon footprint of a dry powder, The Telegraph reported.

If it catches on, it could save thousands of tonnes of CO2 from being released into the atmosphere every year, experts say.

‘We believe protecting patient health and the environment should not be a matter of compromise,’ said Ugo Di Francesco, chief executive of Chiesi.

‘Patients should not have to shoulder the burden of environmental responsibility when considering treatment options that affect their health.

‘In the face of a global climate crisis, we must all share the burden of action. I can only encourage other industry players to join us.’

The company, which is investing £298million in the devices, called the inhalers ‘carbon minimal’ and said they will use a gas called HFA 152a.

HFA 152a is considered to be a propellant with a ‘low global warming potential’, according to the United Nations.

Currently, inhalers use propellants containing chemicals called hydrofluorocarbons, which are what makes them so polluting.

Hydrofluorocarbons are greenhouse gases which are also used in fridges, aerosols, air conditioning and fire extinguishers.

Asthma UK welcomed the news and its head of health advice, Jessica Kirby, told the Telegraph: ‘It is encouraging to see industry players taking decisive action on developing products that will not only help people with asthma live well with the condition but aim to protect the environment too.’

People with asthma should continue taking their medicine as normal unless told otherwise by their doctor.

Chiesi’s inhaler will have to be approved by the National Institute for Health and Care Excellence (NICE) before it can be used in the UK.

HOW DO INHALERS WORK?

Inhalers work by relaxing the lungs of people with asthma.

Asthma is a long-term disease which can make the insides of people’s airways swell up and make extra mucous, which leaves less space for air and makes it harder to breathe.

It can make people breathless, give them a tight chest or cause coughing or wheezing.

Inhalers can stop these symptoms by pumping drugs into the airway to relax the lungs and make the airways wider again.

Commonly used inhaler are ones which contain a drug called salbutamol – this inhaler is usually blue.

Salbutamol can be used occasionally if someone has breathing problems, but shouldn’t be a daily solution.

The drug works by interacting with chemical receptors inside the lungs when it’s breathed in, and triggering a reaction which signals for the body to reduce swelling, in turn loosening the tight airways and improving air flow.