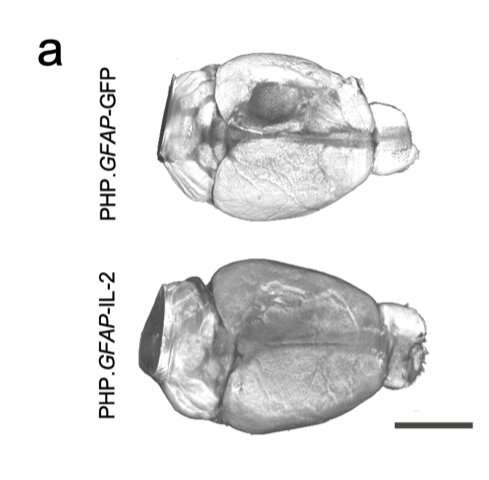 A therapeutic method for harnessing the body’s immune system to protect against brain damage is published today by researchers from the Babraham Institute’s Immunology research program. The collaboration between Professor Adrian Liston (Babraham Institute) and Professor Matthew Holt (VIB and KU Leuven; i3S-University of Porto) has produced a targeted delivery system for boosting the numbers of specialized anti-inflammatory immune cells specifically within the brain to restrict brain inflammation and damage. Their brain-specific delivery system protected against brain cell death following brain injury, stroke and in a model of multiple sclerosis. The research is published today in the journal Nature Immunology.

Traumatic brain injury, like that caused during a car accident or a fall, is a significant cause of death worldwide and can cause long-lasting cognitive impairment and dementia in people who survive. A leading cause of this cognitive impairment is the inflammatory response to the injury, with swelling of the brain causing permanent damage. While inflammation in other parts of the body can be addressed therapeutically, but in the brain it is problematic due to the presence of the blood-brain barrier, which prevents common anti-inflammatory molecules from getting to the site of trauma.

The research team found that regulatory T cell numbers were low in the brain because of a limited supply of the crucial survival molecule interleukin 2, also known as IL2. Levels of IL2 are low in the brain compared to the rest of the body as it can’t pass the blood-brain barrier. 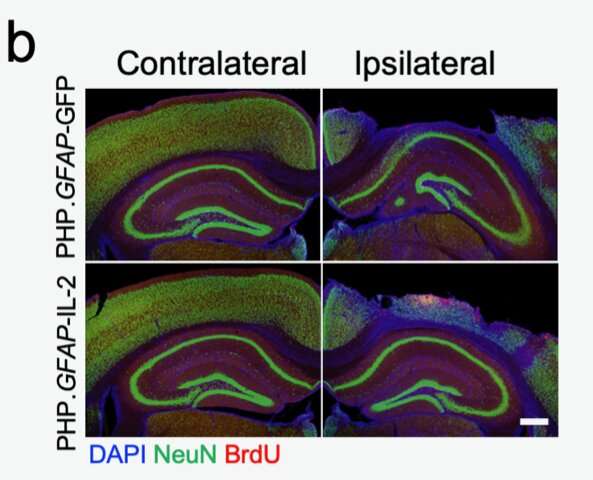 Together the team devised a new therapeutic approach that allows more IL2 to be made by brain cells, thereby creating the conditions needed by regulatory T cells to survive. A ‘gene delivery’ system based on an engineered adeno-associated viral vector (AAV) was used: this system can actually cross an intact blood brain barrier and deliver the DNA needed for the brain to produce more IL2 production.

Commenting on the work, Prof. Holt, from VIB and KU Leuven, says that “for years, the blood-brain barrier has seemed like an insurmountable hurdle to the efficient delivery of biologics to the brain. Our work, using the latest in viral vector technology, proves that this is no longer the case; in fact, it is possible that under certain circumstances, the blood-brain barrier may actually prove to be therapeutically beneficial, serving to prevent ‘leak’ of therapeutics into the rest of the body.”

The new therapeutic designed by the research teams was able to boost the levels of the survival molecule IL2 in the brain, up to the same levels found in the blood. This allowed the number of regulatory T cells to build up in the brain, up to 10-fold higher than normal. To test the efficacy of the treatment in a mouse model that closely resembles traumatic brain injury accidents, mice were given carefully controlled brain impacts and then treated with the IL-2 gene delivery system. The scientists found that the treatment was effective at reducing the amount of brain damage following the injury, assessed by comparing both the loss of brain tissue and the ability of the mice to perform in cognitive tests.

Lead author, Dr. Lidia Yshii, Associate Professor at KU Leuven, explained: “Seeing the brains of the mice after the first experiment was a ‘eureka moment’—we could immediately see that the treatment reduced the size of the injury lesion.” 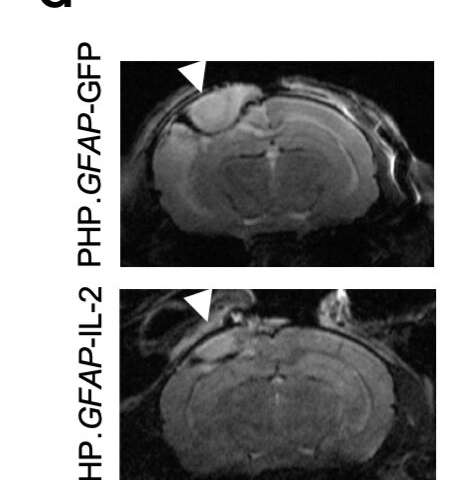 Recognizing the wider potential of a drug capable of controlling brain inflammation, the researchers also tested the effectiveness of the approach in experimental mouse models of multiple sclerosis and stroke. In the model of multiple sclerosis, treating mice during the early symptoms prevented severe paralysis and allowed the mice to recover faster. In a model of stroke, mice treated with the IL2 gene delivery system after a primary stroke were partially protected from secondary strokes occurring two weeks later. In a follow-up study, still undergoing peer review, the research team also demonstrated that the treatment was effective at preventing cognitive decline in aging mice.

“By understanding and manipulating the immune response in the brain, we were able to develop a gene delivery system for IL2 as a potential treatment for neuroinflammation. With tens of millions of people affected every year, and few treatment options, this has real potential to help people in need. We hope that this system will soon enter clinical trials, essential to test whether the treatment also works in patients,” said Prof. Liston.