People should not turn their fridges off to save on energy bills because it can cause food poisoning, health chiefs warned today.

UK Health Security Agency chief executive Dame Jenny Harries said she had heard of people turning all kitchen appliances off amid the cost of living crisis.

But she warned turning the fridge off ‘creates the risk of infection in food’, which can be fatal in elderly or vulnerable people.

Food poisoning, which causes nausea, diarrhoea and stomach cramps, can occur when foods are not stored at the correct temperature.

Cold temperatures slow the growth of bacteria and people are encouraged to keep their fridge at 4C (39F).

Dame Jenny also said people should also try and keep the heating on this winter, ‘particularly those at the extreme ages of life’.

It comes after Health Secretary Steve Barclay warned the NHS is facing a triple threat of the cost of living crisis, Covid and flu over the cold months.

A surge in coronavirus cases, a bad flu season and deteriorating health due to soaring food and energy prices are expected to exacerbate the NHS crisis, he said. 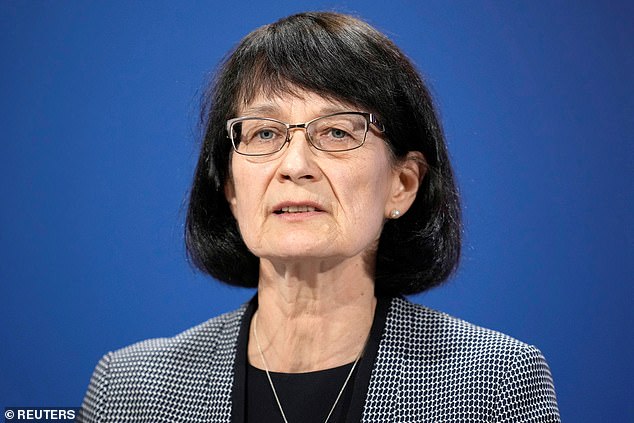 People should not turn their fridges off to save on energy during the cost of living crisis because it can cause food poisoning, UK Health Security Agency chief executive Dame Jenny Harries (pictured) warned today

Heart attack patients have been forced to wait three hours for an ambulance in one of England’s worst affected areas, in a sign of the ever-worsening NHS crisis.

NHS chiefs in Cornwall admitted they are ‘not proud’ of the 200-minute average wait time for Category 2 calls — which is 11 times the national target of 18 minutes.

It is the worst response time on record for the area. One 90-year-old grandmother in the county had to wait 40 hours for an ambulance after falling on Sunday.

But waits nationally are also dire, with the average heart attack patient seen in just under an hour in July.

Emergency departments are also currently at breaking point — with almost 30,000 people waiting 12-plus hours in A&E a day.

Government officials are now investigating ‘potentially preventable’ deaths that may have been caused by the delays in ambulances and emergency departments.

Dame Jenny told BBC Radio 4’s Today programme: ‘I think one of the important things here is people recognise the importance of spending what will likely be for many people very limited resource on heating, because that is an essential part of their health.

‘We’re very aware of this, and I think I’ve heard anecdotally, for example, people turning off fridges — clearly that creates the risk of infection in food.

‘So, it is really important people keep their fridges on and keep their heating on, particularly at the extreme ages of life.’

Meanwhile, UK health advice urges people to make sure that they heat their homes to at least 18C in winter as this ‘poses minimal risk to health’ when residents are wearing suitable clothing.

Age UK has written to Liz Truss and Rishi Sunak, urging them to commit publicly to emergency support for older people and those on low incomes to keep their homes heated.

The charity is also calling on the candidates to back restoring the pensions triple lock to support retirees struggling with the cost-of-living crisis if they become prime minister.

Age UK director Caroline Abrahams said: ‘The way the cost of living keeps rising is a nightmare for us all, but especially for people on low incomes, among them millions of pensioners.

‘Substantial numbers are struggling financially already, but if the economic forecasts are accurate many more pensioners will be plunged into serious trouble come the autumn and winter, including some who until very recently believed their position to be totally secure.

‘Older people and others in our society on low incomes will also need a big injection of extra financial support from the Government to see them through the autumn and winter, because inflation is so rapidly eroding the help they were given just a few months ago.

‘If this doesn’t happen our sincere belief is that we could see unprecedented numbers of older people dying of cold in their own homes, something we would never say lightly and that is incredibly shocking in the 21st century.’

Age UK conducted a survey of more than 14,000 over-65s about what their priorities were for the next prime minister.

More than half (57 per cent) of those surveyed said restoring the pensions triple lock from April 2023 and help with the cost-of-living crisis was what they wanted to see the most.

A quarter (25 per cent) of those questioned said they wanted to see action on the NHS and social care.

One respondent told the charity current price rises were ‘almost like going back to January 1940 for some of us when rationing was introduced during Word War II’.

On Tuesday, public health minister Maggie Throup told LBC radio that ‘if people are reassured about their own health, then it helps to take the pressure off some other other concerns that they may have’.

It comes after it was suggested that energy bills could hit £5,500 next April.

Gas prices spiked again on Monday and unless they drop in the coming months, average households could be facing an annual energy bill of £4,650 from January and £5,456 from April, according to energy consultancy Auxilione.

She also said that it was ‘right’ to wait until a new leader is in place to deal with the cost-of-living crisis.

Experts say people can save money by switching off televisions and other devices at the mains rather than letting them stay on standby.