‘I wanted to put myself in my patients’ shoes’: Nurse is praised after inserting a gastric tube into her nose for a day to empathise with her patients

A healthy nurse has been praised by hundreds of people online after she spent the day with a nasal gastric tube – just so she could better empathise with her patients.

Dorcas Boamah, 27, often has to insert nasogastric (NG) tubes into her patients’ noses, which go down the back of their throats and into their stomachs.

Patients often find this daunting and ask Ms Boamah what it is like – with her being unable to give them an honest answer.

Determined to be more truthful with her patients, Ms Boamah – who works at Royal Free Hospital – had a colleague fit the invasive tube on January 7.

Ms Boamah then wore the tube all day before catching two trains and a bus home, and even went out for dinner – attracting cruel stares from strangers.

After posting a picture of herself with the NG tube on Instagram – which has got nearly 800 likes – ‘the incredible nurse’ claims it has helped her be better at her job. 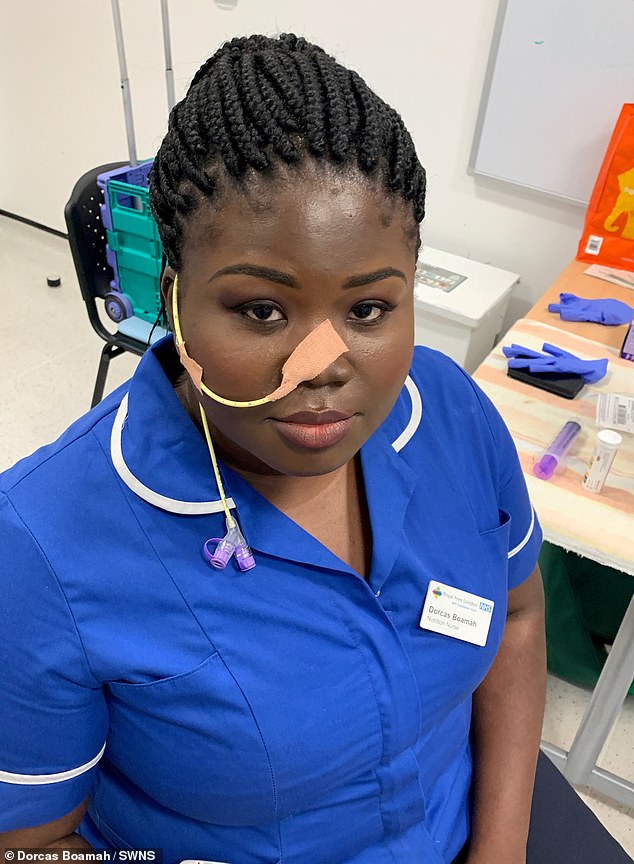 Dorcas Boamah has been praised by hundreds of people online after she spent the day with a nasogastric tube – so she could better empathise with her patients. Ms Boamah is pictured on January 7 – the day she had the tube fitted – in an Instagram post that has attracted 196 likes 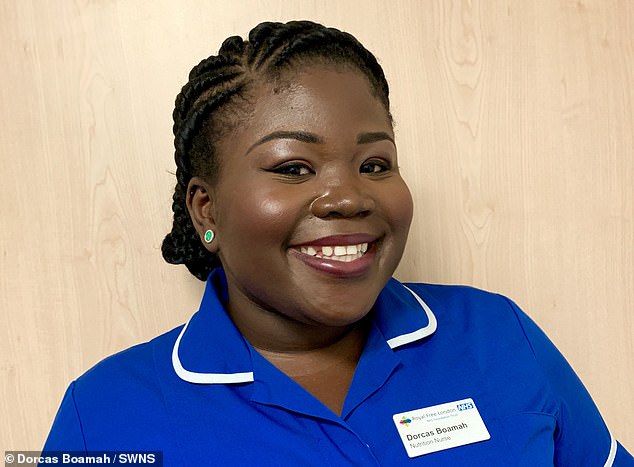 Ms Boamah often has to fit nasogastric tubes and was unable to answer nervous patients honestly when they asked her what it felt like when the apparatus is being fitted. Since spending a day with the tube, Ms Boamah believes she can better empathise with her patients

Ms Boamah’s post has been heaped with praise from social-media users, with one – feedingtube.fitness – calling her ‘amazing’ and adding she was ‘grateful for nurses like her’

Speaking of why she had the tube fitted, Ms Boamah said: ‘I just wanted to see how it felt. Now I know so I can go back to my patients and tell them what they can expect.

‘I wanted to put myself in my patients’ shoes. Often patients old and young will need an NG tube, and many of them are nervous.’

NG tubes are fitted to deliver liquid food, as well as fluids and medication, if it is unsafe for the patient to take them via the mouth.

WHAT IS A NASOGASTRIC TUBE?

A nasogastric (NG) tube may be required if it is unsafe for a patient to take in liquid food, fluids or medication via the mouth.

The tube passes through the nose, down the back of the throat and into the stomach.

The end of the tubing on the outside of the body is then attached to the cheek via tape.

Having a NG tube fitted may be uncomfortable but should not be painful.

Once the tube is fitted correctly, it should be quite comfortable.

Not having a NG tube fitted when one is needed runs the risk of malnutrition.

Ms Boamah now feels she can answer patients honestly when they ask what the tube feels like when it is being fitted.

‘[Before] I could say “yes it will be a little bit uncomfortable” but I didn’t actually know,’ she said.

‘Now I do. It has definitely made me a better nurse.’

Although Ms Boamah felt ‘quite anxious’ while having the tube fitted, she found taking a deep breath and trying to start calm helped make the process run smoother.

‘Now I really understand how taking an extra few moments to chat and relax the patient can make such a difference,’ she said.

Ms Boamah also understands how daunting it can be going out and about with the tube fitted, something many patients are forced to do.

‘It did make me feel quite isolated and tearful,’ she said.

‘[And] I found eating was quite uncomfortable.’

Nakeysha_king called the post ‘powerful’ and wished other nurses were as ’empathetic’ as Ms Boamah. She added she had to have tube fitted in two weeks and was ‘scared to death’. Ms Boamah responded it was a ‘common procedure’ and doctors would ‘reassure her’

Ms Boamah later posted a photograph of herself with the tube on Instagram in an attempt to ‘normalise’ NG tubes.

‘A lot of people live their lives with them and there is no reason to hide,’ she said.

‘It’s a very physical thing you can see on your face, but it doesn’t mean you shouldn’t live your life.’

Impressed by her brave ‘experiment’, social-media users flocked to praise the ‘incredible nurse’.

The user feedingtube.fitness said: ‘oh my gosh!!!! you’re so amazing!!! wow! proud of you. i am so grateful for incredible nurses like you in the world!!!’

And nakeysha-king said: ‘THIS IS SOOOO SO POWERFUL ****** THANK YOU..******IF ONLY ALL DRS NURSES ETC COULD BE MORE EMPATHETIC IT WOULD TRULY RESULT MAKE A DIFFERENCE.

‘[I] WILL HAVE TO HAVE A PEG TUBE PLACED IN TWO WEEKS AND I’M SCARED TO DEATH.’

Ms Boamah took the opportunity to reassure nakeysha-king, writing: ‘It is a common procedure and I am sure your medical team will reassure you’.

While the post on her Instagram page has attracted 196 likes, it got ‘regrammed’ by the campaigners NHS Million, gaining a further 599 likes.

After Ms Boamah’s post was ‘regrammed’ by the health service campaigners NHS Million, the praise kept coming in, with Instagram-user dogheadedd calling the ‘NHS lot incredible’ 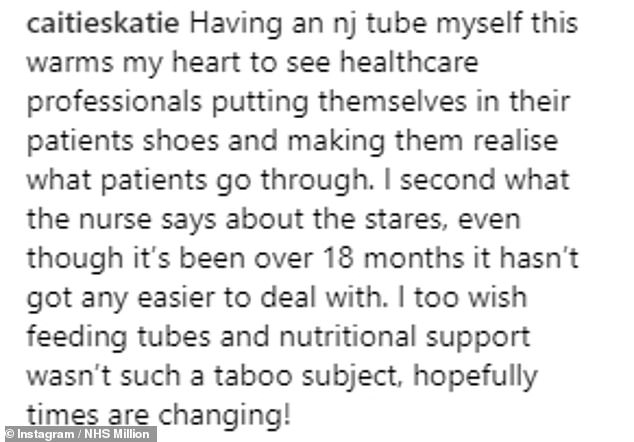 Another posted it ‘warmed her heart to see healthcare professionals putting themselves in their patients’ shoes’. After having an NG tube for 18 months, she sympathised with the stares