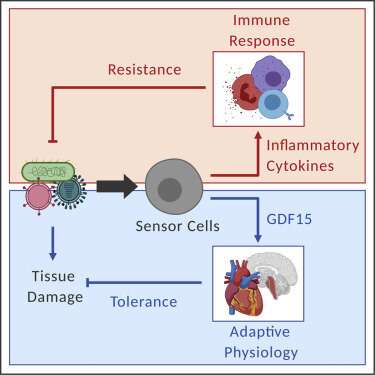 To overcome an infection, the immune system has to both kill the invading virus or bacterium, and tolerate the inflammation triggered by the infection. In a new study, Yale researchers have figured out a key component of the second infection-fighting mechanism.

The Yale team focused on a hormone called growth and differentiation factor 15, or GDF15 for short, which is elevated in many different diseases. Using patient blood samples, the researchers found that GDF15 was highly elevated in people with sepsis, a life-threatening complication of infection, regardless of the kind of infection. The hormone appeared to be a common feature of inflammatory diseases generally, they said.

In further experiments with mice, the researchers determined that the role of GDF15 is to help the body tolerate inflammation during an acute infection. It does so by protecting the heart during infection by signaling the brain to tell the liver to produce triglycerides, a type of fat the heart needs for energy in order to function properly.

These study results suggest that GDF15 is protective during an acute infection or illness. The role it plays in chronic inflammatory diseases, however, is unknown, and may be harmful, say the researchers. This insight could inform future treatment strategies for inflammatory diseases, including sepsis, autoimmune diseases, and cardiovascular diseases.

The paper, co-led by Ruslan Medzhitov and Andrew Wang, is published in Cell.