Resolutions come and go, but Microsteps are forever.

There’s even science to prove it: According to U.S. News and Report, 80% of New Year’s resolutions fail by the second week of February — and that says nothing of the rest of the year.

This seemingly bleak statistic doesn’t mean the new-year-new-you mindset is futile, though. It’s just that, culturally, we’ve been going about it the wrong way. Enter: Microsteps, the behavior change solution we so love at Thrive.

The concept is simple: Microsteps are small, actionable, and science-backed steps you can take to make immediate changes in your daily life. Microsteps take no more than a few minutes, and fit well into your schedule so they’re actually easy — and realistic — to sustain. But remember, they’re Micro: like goals for tiny mice, or objectives for Tic Tacs — actions so elementary it’s impossible to fail. These bite-sized changes lead to larger ones ones over time: One micro-step for man, one great leap for mankind(’s well-being, in the long run).

So this year, I’m foregoing fruitless attempts (and failures) at egregious transformations. No longer shall I fall victim to well advertised diet programs ensuring success only conceivable if you abruptly — and drastically —  alter each habit you’ve spent your life forming, evolving, like a Pokémon, from couch potato to gym rat overnight.

No, this year, I’m setting attainable intentions — and putting them together: habit-stacking two Microsteps into one still tiny, but slightly less tiny, intention for the new year.

Therefore, I’m proud to announce that, for me, 2020 is the year of hydration and gratitude.

I call it “Hydratitude,” and honestly, I’m obsessed. 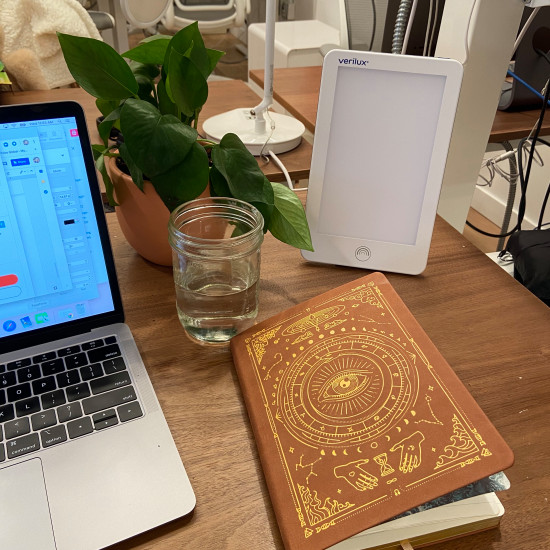 I got the idea from a piece I wrote last year, in which I chronicled my history with panic attacks and queried experts for tips on managing them. One suggestion in particular stood out: If you start to feel anxious, think of things for which you’re grateful. I’d never considered it (I tend to lean pessimistic), but Andrea Gurney, Ph.D. and psychologist, was convincing. “It’s hard to be grateful and stressed simultaneously,” she confirmed, and I figured she must be onto something — though I secretly thought, “try me.”

Panic has indeed tried me, multiple times, since that day — and thankful thoughts haven’t exactly kept anything at bay. But of course they didn’t. Gratitude isn’t going to miraculously pull me from the depths of a full-blown state-of-alarm: Its therapeutic properties don’t work like Netflix, delightfully summoned and binge-consumed on command. No: Gratitude is a mindset one must actively — consciously — work towards every day. Humans are creatures of habit, and habits don’t form overnight: It’s only when something’s consistent that it starts to work its magic.

So I set the intention to incorporate gratitude into my everyday life, and started a daily gratitude journal.

…Except I wasn’t sticking to it. Just journaling wasn’t enough. I needed something to hold me accountable to writing my grateful-fors down. But what? Lost, I took a sip of water to clear my thoughts and — that’s it! HYDRATION!

And thus, Hydratitude was born. (It’s a Capricorn.)

As its name implies, it’s quite literally a hybrid of hydration and gratitude and it’s become one of the best parts of my daily routine.

It works like this: Every time I drink a significant amount of water (six ounces or more), I note it in my journal, followed by something I’m grateful for. It’s surprisingly easy, as each task holds me accountable to the other: It’s not like I can’t drink water, so I have to ritualize gratitude. Or else, well, I’ll die. And that’s no fun now, is it?

An added bonus: Getting up to refill my cup keeps me moving throughout the day, which isn’t exactly my strong suit (I’m quite a fan of staying seated). Since I started Hydratitude however, that’s changed, and I walk, and even stretch, every hour of the day. (Often en route to the restroom.)

Basically: Hydratitude’s the win that keeps on winning.

As for the journaling aspect: It can feel like a lot of work, but it’s worth it. You also don’t have to keep a literal journal: Take notes in your phone, or simply think of what you’re grateful for — do whatever’s easiest, and most sustainable, for you. I personally prefer the practice of pen to paper, in part because I have something physical to look back on when I’m feeling down: A literal manifestation of all the things that bring you joy — a persistent reminder of tiny wins — as trivial as they may seem.

And boy, can they be trivial: Because sometimes, thinking of something for which you’re grateful is hard. Not because you’re ungrateful necessarily, but because some things feel so obvious you don’t even think to mention them.

For example: I wrote that I’m grateful for clean water, and I’m ashamed to say that before that moment, I’d never consciously considered that fact.

Others: Starbucks’ egg bites (they’re really good). The fact that my dog ate that morning. My desk plant. My HappyLight. Matcha lattes. My hair colorist.

There are more meaningful ones, too, though: The ability to walk. A job I love. Living in a country in which women can vote. Therapy. And so on.

And then you get the hang of it.

Gratitudes don’t have to be grand, though they can be, and they don’t have to matter to anyone but you. What’s important is regularly reminding yourself of how lucky you are, and eventually, it sticks. Suddenly you’re grasping for gratitudes when things start to go awry: Panicking, hitting your head in the rain, cutting your finger on a can of dog food (all true stories). Then, it’s funny: Enraged, running late, soaking wet and/or bleeding, you find yourself grumbling, “I HAVE SUCH CUTE PETS, DAMN IT!” And you calm down, because you’re so grateful, and acknowledge how meaningless your ire is.

Unlike “resolutions,” which focus on striving for what you want, gratitude is all about acknowledging what you already have. It’s not about changing your life: just changing how you see it, and learning to love it more.

And I think that’s the best “resolution” there is.