I first came across EFT ("emotional freedom technique") when I was in the throes of a breakup. I’d read all the articles on how to survive heartbreak and had progressed to videos.

In this particular video, a friendly-looking middle-aged man invited the viewer to copy him as he tapped a series of pressure points on his face and body and recited a script. 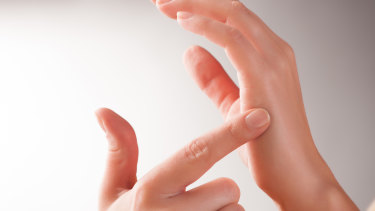 “Even though I feel broken-hearted,” he began, whilst tapping on the side of his hand, “I choose to love and accept myself anyway.”

It seemed woo woo and unlikely, but I was curious, and had nothing to lose. I followed along.

Now, I’m a deeply cynical person. I don’t believe in star signs, or the healing powers of crystals, or or asking the universe for favours. But this worked. By the end of the five-minute video – which moved through an exploration of the negative feelings associated with heartbreak and ended with positive affirmations – I felt much better.

Since that day, I have used EFT tapping for anxiety, sadness, anger and more, and it never fails to bring relief.

EFT tapping works by combining the articulation of negative thoughts, feelings and memories with tapping on various acupressure points on the body. According to Lorna Hollinger, CEO of the Australian Tapping Institute, the aim of EFT is to calm the body’s emotional response to memories and experiences, and to reduce or eliminate distress around those memories and experiences. She offers the example of a person with a dog phobia, who uses EFT to clear the fear associated with encounters with dogs.

“Tapping rewires the fight or flight response in the brain so the memory will no longer be scary," she tells me.

"The encounter with the dog still happened, but the memory will no longer create that stress response.”

On a very basic level, EFT requires you to recognise and feel your feelings, to sit with the pain or stress or trauma, instead of constantly pushing it away.

Khadine Aharon is an accredited clinical social worker and therapist who uses EFT extensively in her practice. "So often we try to avoid emotion or reframe things," she says, "but with EFT you really honour the shitty stuff, the painful stuff, the deep stuff that you don't often talk about."

The concept of facing and accepting negative emotions is fundamental to mindfulness and forms the basis of much therapeutic treatment, such as the PTSD cure pioneered by Dr Clare Weekes. But EFT offers the added benefit of tapping on pressure points, which is effective in reducing stress even without the spoken word.

“We know from research that even when we tap on the points with nothing else, even a script, we get a reduction in the stress hormone cortisol,” says Aharon. “But when you tailor it to the individual’s needs [with a personalised script] you get a bigger reduction in symptoms and more transformation”

I wince when she talks about "shifting energy"; I’m still not comfortable with the woo woo aspect. But, of course, the Chinese have been working with meridians and acupressure points for thousands of years. And, as Hollinger reminds me, we instinctively use tapping for comfort.

“We all pat our babies on the back or bum to calm them,” she says. “There are two prime meridian circuitries down the back and under the bottom. We may call it ‘patting’ but it’s still tapping.”

Through EFT, the person is encouraged to move through negative feelings towards a more positive reframing.

“You always follow up with an affirmation,” Aharon tells me. “ You’re not saying the trauma is okay, you’re saying, ‘even though the terrible event happened to me, I’m still okay’.”

Both Aharon and Hollinger believe there is a place for DIY tapping, and the YouTube videos and the generic scripts they offer. They warn, however, that deeper work around more serious trauma can only be accomplished with a trained EFT practitioner.

Having said that, you can tap away at any time you are feeling heightened emotion.

“Tapping on one pressure point when you’re venting, or angry, or anxious can take the energy out of the emotion. You can avoid the brain fog that comes with intense stress.”

Recent scientific studies have proved the efficacy of EFT, and the evidence continues to grow. EFT may be woo woo, but the proof is in the pudding.