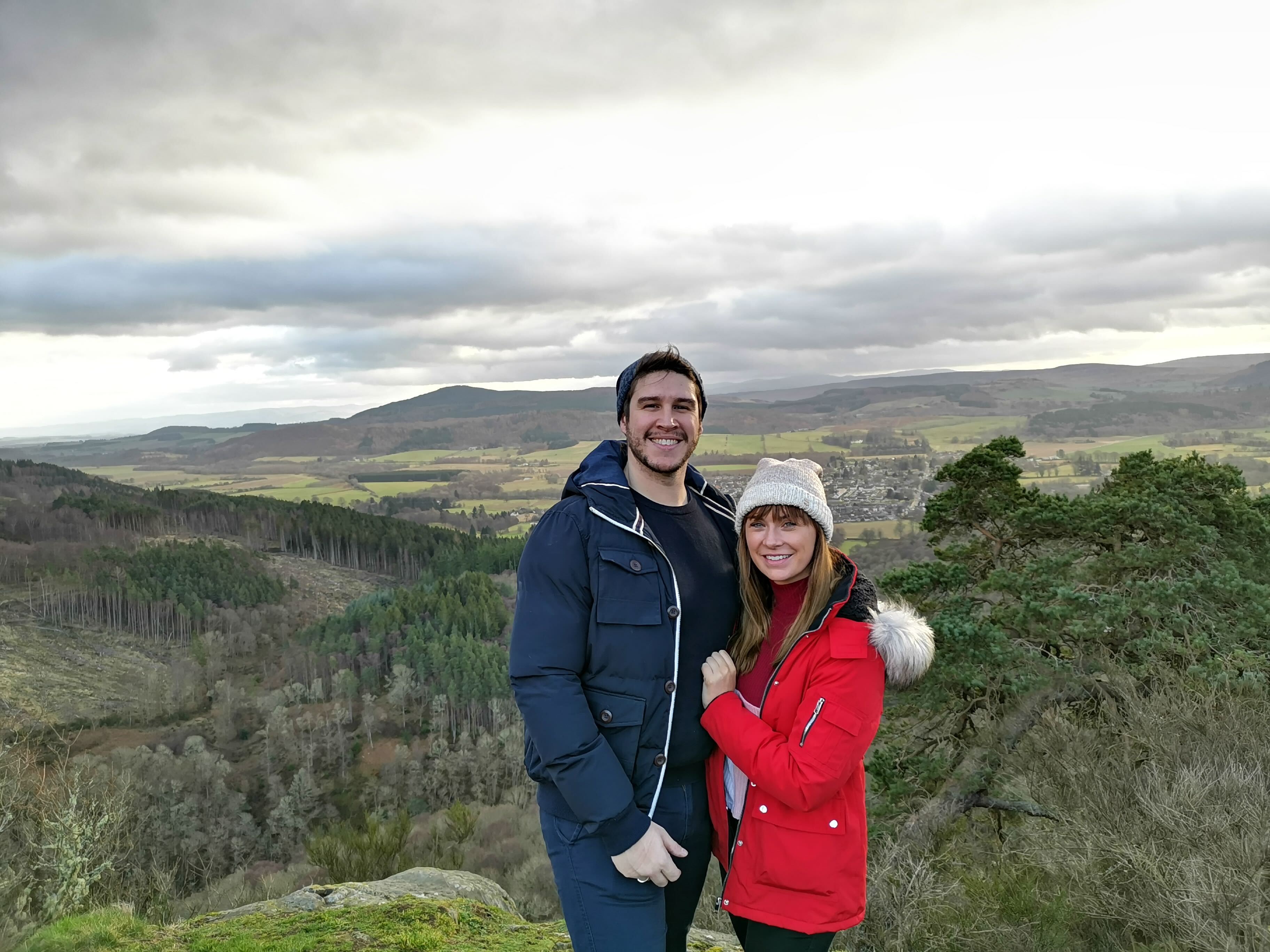 When you come out of a long relationship, the last thing on your mind is getting into another one.

That’s what I thought when I met Caicy, five years ago on Bumble. I’d come out of a two-year-long relationship and decided to try being single for a couple of months, but still swiping on the apps for casual meet ups.

If anything, I needed to build my confidence back up by getting back onto the scene.

Caicy was recently single, like me, and we hit it off – adamant neither of us wanted a relationship. The saying ‘famous last words’ couldn’t be more true.

On his profile, it said he loved Gifs, so I sent him a weird one of a man waving with tape over his face, for some reason… I’m surprised he even replied, looking back.

Caicy sent back an equally strange one of a guy in bushes, saying: ‘Hi there.’ I was in bits as we tried to one-up each other, as well as playing games of ‘two truths, one lie’ rather than make boring small talk.

It set the tone for pretty much the rest of our relationship.

Conversation flowed for a few weeks, before we arranged to meet up. Caicy decided to take me on a bar crawl of speakeasies in London – except, the problem with secret bars is that they’re secret. When he couldn’t find half of them, I thought it was hilarious, and we settled on ice cream and a long walk instead.

Though he couldn’t get a word in edgeways with me, we saw each other quite often – dating casually. Staying at each other’s houses during the week and hanging out at the weekends.

We agreed, from the start, that we’d be honest with each other about our feelings – and end it if either of us got in it too deep. Except, after three months, I started developing feelings for Caicy.

‘I’ve got feelings for you,’ I told myself in the mirror, practising what I’d say to Caicy while doing my hair and make-up. This wasn’t meant to happen, I told myself.

I ended up telling him the truth, worried I’d lose him – worried he didn’t feel the same way. I ended up crying because I couldn’t describe how I felt in words, I rushed to leave the room but before I could, Caicy stopped me and said he felt the same.

By 2019, we’d moved in together – rescuing a dog named Fidget, who had behavioural problems. Caicy discovered how much I loved cooking, and I discovered how much of a morning person Caicy was. I’d be having breakfast and coffee and he’d be talking about politics, not my usual conversation choice, but we balance each other out so it worked perfectly.

Except, that year was a terrible year for us. That May, Caicy’s dad passed away quite suddenly, and I lost my nan that September – we were heartbroken.

On New Year’s Day, I ended up in hospital – and not from a hangover.

I started getting searing, horrific cramps, and bleeding. But it wasn’t like any period I’d ever had before. I’d had some irregular bleeding over the last few months, but I’d just put it down to the stress of grief.

But this time it just wouldn’t stop. At first I was embarrassed to show Caicy, as I’d never seen so much blood in my life. I was worried he wouldn’t think of me in the same way, seeing me at my worst. We were only in our first 18 months of dating, after all – still in the honeymoon period.

I think the ex-army in him came out and he took control of the situation; we dialled 111 and went to the A&E immediately.

On January 7, I was diagnosed with stage 3 cervical cancer at the age of 31. I couldn’t believe it; I’d been fit and healthy my whole life – and cancer didn’t run though my family. All I could think about was Caicy, how he’d just lost his dad to cancer, and previously his grandparents.

But he was incredible. While I was going through radiotherapy and chemotherapy as the cancer has spread to one of my lymph nodes, Caicy went out of his way to do everything to make life feel as normal as possible for me.

Some days I’d have no energy after my treatment and Caicy would take over the cooking or getting in takeaways when I was feeling crappy; cleaning, shopping, walking the dog – and, of course, making me laugh with a constant supply of Gifs. He didn’t treat me any differently, and in fact – it made me love him even more.

In my last few weeks of treatment, Covid hit – and I was alone in hospital, without any visitors. The Gifs kept coming, though, with Caicy constantly checking in on me, making me feel loved and comforted.

During treatment, we hit our biggest relationship hurdle: kids. As I had radiotherapy, I was told about the effects the cancer would have on me, my fertility. Questions about IVF and freezing my eggs were coming at me from all angles, and it became pretty overwhelming.

Caicy and I had barely spoken about the future. All I knew is that I wanted him to be in it – and I didn’t want question marks over my fertility to be a deal breaker.

‘Let’s focus on you now,’ he said, making me feel at ease – suggesting that we could adopt, if it ever came to it.

Thankfully, radiotherapy was a success and now there’s no evidence of cancer in my body – but I still had to isolate for a year while my immune system recovered. It could have been make or break for us but now, Caicy and I are stronger than ever.

Last December, at Christmas markets in Gdansk, Poland, Caicy surprised me and proposed with a custom-made ring – except, it wasn’t that romantic as I was so embarrassed that he got down on one knee, that I hushed: ‘Of course, you idiot – get up!’ Still, we’re getting married next August! Fidget might even be invited, too.

Getting cancer was the worst thing to ever happen to me, but with Caicy by my side, I felt lucky. I don’t think I could have done it without him – without the man with an interesting taste in Gifs that I met on Bumble.

As told to Emmie Harrison-West

Rush Hour Crush – love (well, lust) is all around us

Tell us about your Rush Hour Crush by submitting them here, and you could see your message published on the site.