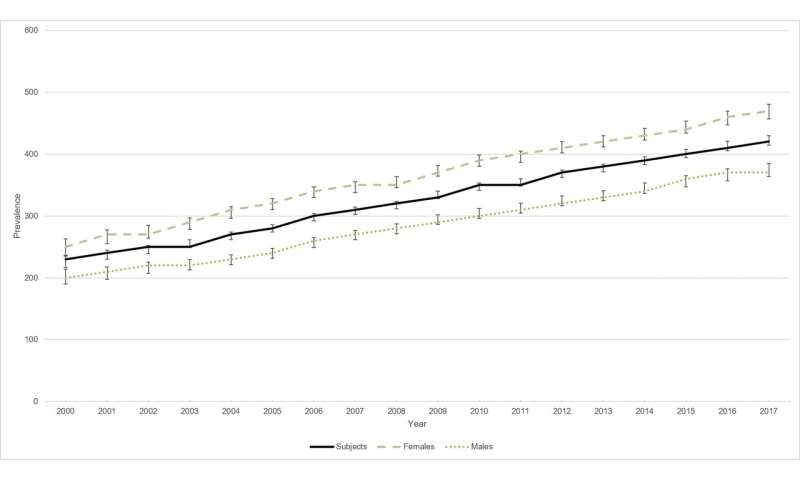 The number of people suffering from inflammatory bowel diseases (IBD) is three times higher than previous estimates, with sufferers also at a higher risk of developing colorectal cancer (CRC), according to new research presented today at UEG Week Barcelona 2019.

Researchers from Sandwell and West Birmingham hospitals NHS trust and the University of Birmingham examined IBD cases from the beginning of the century to attain accurate data on ulcerative colitis (UC) and Crohn’s Disease (CD) prevalence in the UK. Previously, only limited or old data existed, but by utilising data from the Health Improvement Network (THIN), a nationally representative UK primary care database, this new evidence demonstrates that IBD prevalence is three times higher than previously reported, with UC and CD prevalence increasing by 55% and 83% respectively, between 2000 and 2017 (Figure 1a/b). The study also showed that IBD prevalence is predicted to rise by almost a quarter from 2017 to 2025.

Affecting over 3 million people across Europe, inflammatory bowel diseases are a group of disorders involving chronic inflammation of the gut. The severity of the symptoms and the long-lasting nature of the diseases can have an extremely debilitating impact on the lives of sufferers. For example, higher rates of depression and reduced workforce participation in patients with UC and CD has been reported in previous studies, with an estimated 44% of IBD sufferers claiming they had lost or quit their job because of IBD. 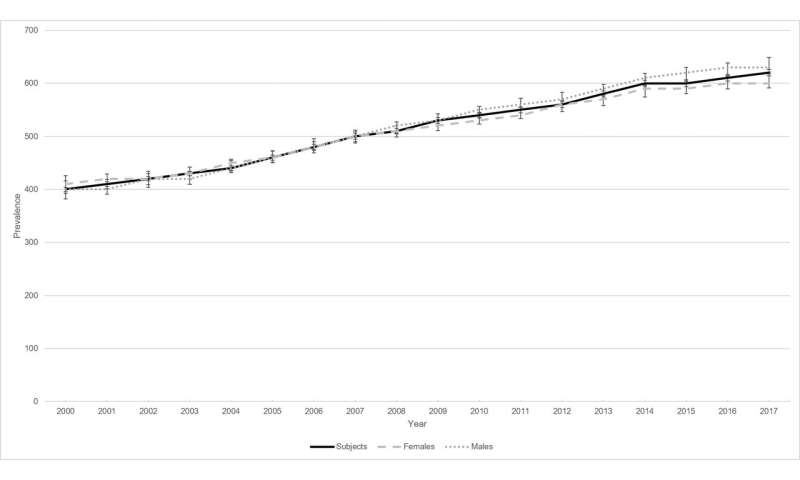 Researcher, Dominic King, from the University of Birmingham, who is presenting the findings for the first time at UEG Week, comments “Our study suggests that IBD prevalence is likely to rise substantially over the next decade. As there is currently no known cure for IBD, patients will often need complex and costly treatments throughout their lives. This predicted rise in prevalence may place an even greater strain on already overburdened healthcare systems.”

“The burden of IBD is compounded further by an association with colorectal cancer”, comments Dr. King. “Our study found that patients suffering from Crohn’s disease had a 23% increased risk of developing CRC compared to matched controls, whilst ulcerative colitis patients had a significantly elevated risk of 43%. The rise in prevalence of IBD could therefore potentially lead to an associated rise in CRC cases.”