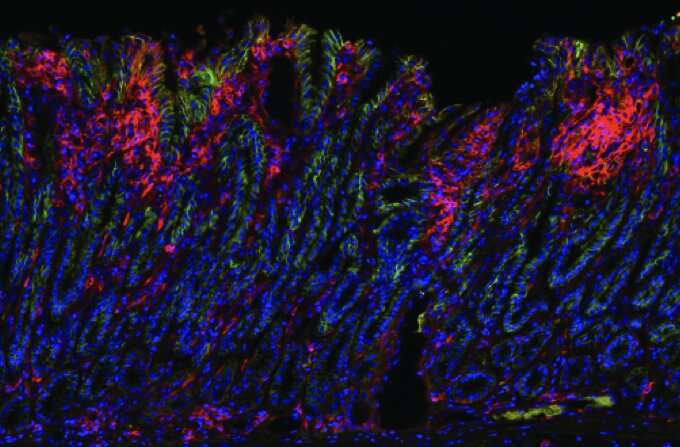 Immunotherapy for stomach cancer may work better if the therapy is delivered earlier in the course of disease and in combination with standard chemotherapy, a new study from researchers at Columbia University Vagelos College of Physicians and Surgeons suggests.

The study, in mice, was published online in the journal Gastroenterology.

“Patients with advanced stomach cancer have limited treatment options,” says Woosook Kim, Ph.D., first author of the paper who was an associate research scientist at Columbia when the study was done. “Many are not eligible for surgical resection, and response to radiotherapy or chemotherapy is often low.”

Many cancers express proteins that prevent our immune cells from attacking the tumor. Immunotherapies block these proteins, thereby unleashing the immune cells. Immunotherapies that block proteins called PD1 and PDL1 have been approved for patients with advanced stomach cancer as a second- or third-line treatment after chemotherapy, but response rates are low.

To better understand why immunotherapies don’t work well in advanced stomach cancer, the Columbia researchers looked closely at the microenvironment around the tumors in mice that develop this disease.

The researchers discovered that mice with more advanced disease had an abundance of myeloid-derived suppressor cells (MDSCs) that also express PDL1 proteins, which appear to overpower the immunotherapy.

Combining immunotherapy with standard chemotherapy also shrank larger stomach tumors, because the chemotherapy killed many of the MDSCs.