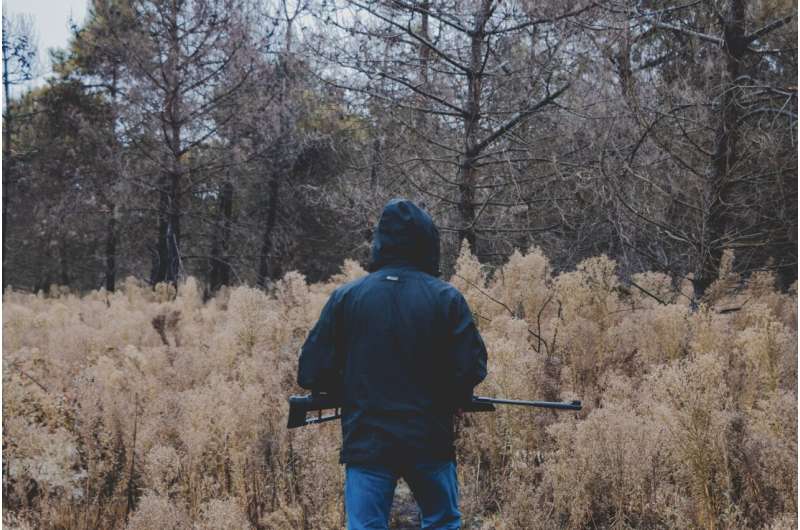 In just the month of October in France, a 67-year-old woman died in Brittany, a 33-year-old mother and her two children were shot in the legs in the Rhône region, and a 62-year-old mushroom picker was shot in the abdomen and had to be helicoptered to Marseille.

The link between these gruesome incidents? They were all caused by careless hunters.

All the more timely, then, is the French Senate’s report released in September, which called for a ban on alcohol and narcotics while hunting alongside for a spate of measures similar to those applied to drink-driving. On 25 October, the government released a policy roadmap comprising some of these suggestions, including restrictions on drinking. “Hunting involves an arm. Like driving, it is not compatible with a high blood-alcohol concentration,” the secretary of state for ecology, Bérangère Couillard, said. The Elysee is now awaiting to hear feedback from hunting federations with the view to formulating decrees by early 2023 at the latest.

The president of France’s National Hunters’ Federation (FNC), Willy Schraen, has retorted that “a drunk guy on a bike is dangerous, too,” apparently forgetting French drink-driving laws also apply to cyclists.

The French hunting chief’s remark would not hold water in other countries, where representative organizations advise hunters to abstain from alcohol. Absent an EU-wide legislation on the matter, national legislation in states such as Spain, Belgium and Germany restrict drinking while in possession of a firearm. Or take, for example, the official website of a US agency for hunting education, which states that “consuming alcohol before or during the hunt increases the risk of incidents because it impairs coordination, hearing, vision, communication, and judgment.”

This may seem like common-sense advice, but alcohol is still integral to the world of hunting, both in France and farther afield.

In the United States, where the general population consumes 20% less alcohol than in France, a recent survey carried out on a representative sample of 2,349 young adults found that 23% of male hunters had at some point hunted while inebriated.

And in France? Although there is an absence of hard data, the Senate report tentatively ventures that a “small minority” of people have hunted while under the influence of alcohol. However, the senators offer more precise statistics regarding deaths and serious accidents in hunting, 9% of which are attributable to a hunter’s state of inebriation.

Unfortunately, the report ignores most international data available on the topic, failing to mention that in the US, drunkenness is involved in 15% of hunting accidents. Also overlooked is an extensive Danish study of 1,800 hunters, which revealed the risk of firearm-related accidents was directly proportional to the hunters’ alcohol intake.

Moreover, the recent Senate report does not clarify how alcohol significantly raises the risk of accidents. But we have managed to pinpoint three contributing effects of inebriation.

A study conducted at a Swiss A&E service showed a third of the hunting-related injuries there resulted from falls—for example, when shooters tumbled from tree-stands. Alcohol is conducive to this type of incident, particularly by interfering with the inner ear and cerebellum, which regulate balance. This has a negative impact on the hunter’s anticipation and motor coordination skills.

Other research demonstrated that when individuals were instructed to avoid obstacles while walking on a treadmill, their reaction times were significantly longer, even at low levels of alcohol intake.

Alcohol also impairs peripheral vision, thus affecting judgment and accuracy in angles of fire. This is what causes double vision and blurred vision, by disturbing the action of muscles that control visual focus. It enhances glaring, by slowing down the muscles responsible for opening and closing the pupil in response to surrounding light levels.

Over the long term, high alcohol intake alters color perception and promotes the emergence of chronic diseases, such as cataracts. It can lead to age-related macular degeneration (AMD), a condition characterized by damage to the central region of the retina.

Alcohol even deteriorates our hearing. In one study, subjects who had consumed alcohol were found to have significantly poorer hearing abilities compared to those who had not.

Once the extent of alcohol’s effects on sight and hearing are better understood, the range of stories that pop up in local newspapers—such as the man who ended up riddled with buckshot when his hunting companion mistook him for a hare—become less of a surprise.

According to France’s Biodiversity Agency (OFB), hunting accidents are often the result of carelessness and bad judgment. The OFB reminds hunters that, once fired, the projectiles can reach a distance of up to five kilometers (three miles). When a target is far away or moving, how can a hunter guarantee—drunk or sober—that their bullet doesn’t hit a mountain biker, a ten-year-old girl playing by the river or a young hiker ?

The choice of whether to pull the trigger or hold fire is dependent on another dimension. According to the Senate report:

“More than two thirds of accidents result from gross misconduct that contravenes basic safety rules. Moreover, some one hundred incidents per year lead to devastating consequences, whereby shots are fired at vehicles or homes.”

Assessing risks and perceiving the consequences of our actions are two processes that are notoriously affected by inebriation.

A 2015 study demonstrated this effect using a straightforward method, which involved presenting two jars filled with cards to bar patrons, aged 18 to 43. The subjects were told that they could earn a prize if they found a winning card. In the jar on the right, 50% of the cards were winners, whereas the probability of winning was not given for the jar on the left. The results showed that the drunk men (but not the women) more often chose the riskier option. Could this be likened to the scenario of taking a shot in the dark in the hopes of hitting a target?

A major factor in human aggression

By directly affecting the prefrontal cortex, alcohol disturbs executive cognitive functions, which are involved in our ability to consider or maintain multiple options simultaneously in order to solve problems, as well as our attention skills, our action inhibition skills, and our ability to control aggression. In fact, alcohol is the psychoactive substance most often linked to human aggression on a global scale.

Of course, it’s not alcohol but hunters who have shot 400 people dead in the past two decades in France and injured thousands more. (And it should be noted that alcohol is responsible for almost a million deaths in instances not related to hunting).