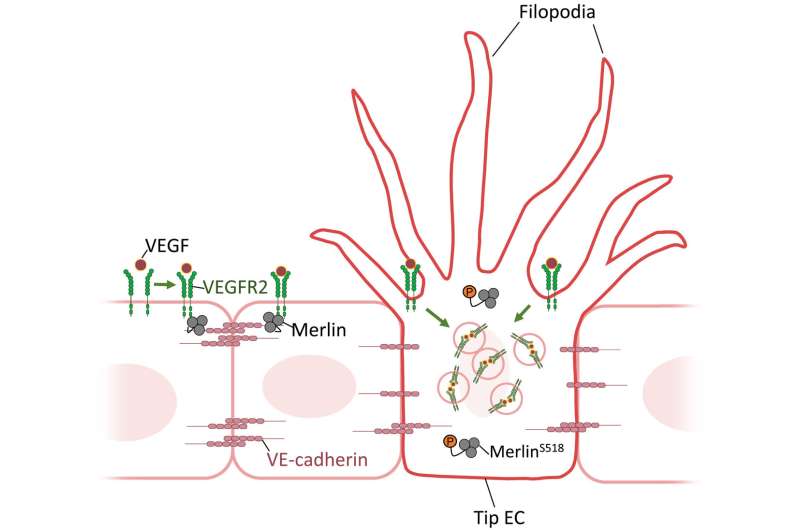 Blood vessels are the body’s essential architecture that exists in order to nurture cells with sufficient nutrients and oxygen. Angiogenesis, or the formation of new blood vessels, is of great research interest in cancer medicine. As tumors need to generate new blood vessels to grow, inhibiting angiogenesis has been suggested as a promising approach to treating cancer.

Morphologically, tip EC induction is the foremost step for sprouting angiogenesis. The formation of the tip ECs is induced by a pathway called vascular endothelial growth factor (VEGF)-A (given as VEGF hereafter) signaling. Molecularly, intracellular activation of VEGFR2 signaling is initiated by ligand-induced, clathrin-dependent VEGFR2 internalization. Scientists have long been curious how one particular EC ends up possessing higher VEGFR2 signaling activity than its neighbors and is thus fated to become a tip EC during sprouting angiogenesis.

Led by Dr. Bae Jung Hyun and Professor Koh Gou Young, researchers at the Center for Vascular Research within the Institute for Basic Science (IBS) in Daejeon, South Korea discovered that a protein called Merlin is indispensable for tip EC induction by regulating intracellular VEGFR2 downstream signaling during sprouting angiogenesis.

Merlin, encoded by the neurofibromatosis type-2 gene NF2, has been known for quite a while to function as a tumor suppressor. It is ubiquitously expressed in all types of cells and acts as a membrane-associated protein, which plays a gatekeeping role in signal transduction from membrane receptors in a cell density-dependent manner. Nevertheless, it has not been investigated whether endothelial Merlin is essential in sprouting angiogenesis and, in detail, which intracellular signaling is regulated by endothelial Merlin.

In their study published in Science Advances, the researchers showed that the density of the EC in the environment was the key factor. When the localization and density of Merlin in the cells under low or high culture density were compared, Merlin in the high cell density culture was able to better form complex with VEGFR2. The researchers showed that this is due to the fact that the presence of VE-cadherin, a cell-to-cell junction protein, is required for Merlin and VEGFR2 to form a complex with one another. This formation of the Merlin-VEGFR2 complex suppresses VEGFR2 internalization, thereby suppressing the pathway. In contrast, Merlin in a low-density ECs environment with relatively low VE-cadherin density allows a high level of VEGFR2 signaling and ERK activation, which leads to tip EC induction (Fig.1).

“The role of Merlin in EC fulfills the missing piece for sprouting angiogenesis. Sprouting angiogenesis should be regulated by the coordinated balance of promotion and inhibition of signaling through Merlin,” explains the first author, Bae Jung Hyun. 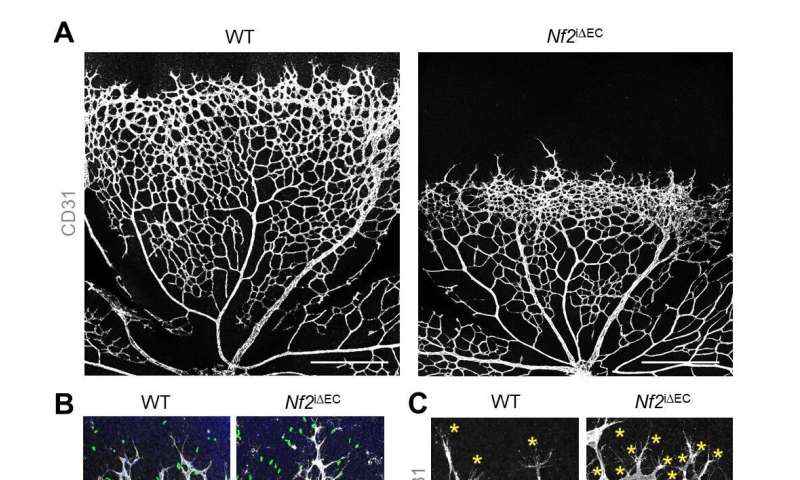 The researchers further demonstrated that Merlin also plays a gatekeeping role in maintaining capillary integrity and proper angiogenesis by suppressing the unnecessary formation of filopodia and sprouting from the adult vessels in normal tissues and tumors. When the Merlin was depleted in the EC, the researchers found that an excessive amount of non-functional vessels are formed in the tumor model, which enhances tumor necrosis and reduces tumor growth. Merlin-deficient mice implanted with human lung cancer showed an impressive 80.6% reduction in tumor growth after 3 weeks in comparison to regular mice. Likewise, adult vessels in the thyroid gland and small intestine showed an increased number of filopodia in Merlin-deleted mice in comparison to wild-type mice.