Positive thinking IS the key to a healthy old age: Optimists who believe their life has a meaning ‘walk faster, have stronger grips and suffer less pain as they get older’, study finds

Positive thinking may be the key to staying healthy in old age, research suggests.

Scientists found optimists who believe their life has a meaning walk faster, suffer less pain as they age and have stronger grips.

Over-50s are more likely to judge life worth living if they are married and see their friends at least once a week, the study also found.

While the researchers warned spending too much time on your own, or in front of the television, may make life feel less meaningful. 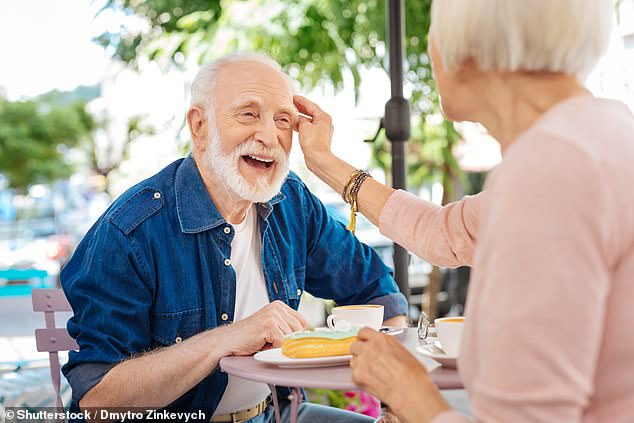 Over-50s are more likely to judge life worth living if they are married and see their friends at least once a week, a study has found

Researchers at University College London questioned more than 7,000 people aged 50 to 90 on how meaningful they felt their life was.

Those who judged life most worthwhile were 16 per cent more likely to be married and 13 per cent less likely to live alone.

They were 13 per cent more likely to see friends at least weekly, and much more likely to be a member of an organisation, from church to Neighbourhood Watch or a social club.

The research found those whose lives held least meaning spent almost twice as much time alone during the day – more than six hours on average. They spent 50 minutes more a day watching television.

Lead author Professor Andrew Steptoe, from the department of behavioural science and health, said: ‘Social engagement is a very important component of living a meaningful life for many people.

‘Being a member of an organisation may be meaningful in itself, but it can also provide social contact.

DOES MARRIAGE CUT YOUR RISK OF DYING?

A study of 50,000 American skin cancer patients found that, of those who were married, 45.7 percent had stage 1 tumors, which have a 98 percent survival rate.

The chance of catching the disease so early dropped 32 percent for single patients, 38 percent for divorced, and a staggering 70 percent for widowed.

The University of Pennsylvania researchers admitted they were stunned by the stark difference in diagnoses.

They said the findings should help dermatologists tailor their advice to patients, suggesting screening at an earlier age for single patients and inviting partners into clinic appointments for home-screening training.

‘Finding meaning when you are sitting on your own is quite tricky, since for most people this is linked to their relationships.

‘We were struck by how important this feeling of meaning was, with people who saw their lives as meaningful being much more healthy as well as being socially engaged.’

The study asked older people to rate how meaningful they felt their lives were on a scale of zero to 10.

Asking a range of other questions about people’s lives, they found those who rated their lives most meaningful, with a score of nine or 10, were 10 per cent most likely to be among the highest earners.

These people were around a third less likely to be depressed, were less obese and were a fifth more likely to get good or very good sleep at night.

They walked faster, ate better and were less likely to be disabled or suffer from chronic illnesses.

Experts believe a sense of meaning can give people the motivation to live more healthily, with those who see life as most worthwhile also 11 per cent more likely to exercise.

To get that sense of meaning, the results suggest it is important to spend time with other people.

Those who rated their life’s meaning between zero and two spent five hours and 18 minutes alone during the average day, compared to two hours and 46 minutes for people who saw their lives as more meaningful.

People were more likely to see their life as worthwhile if they volunteered, did a cultural activity like visiting a museum or the theatre at least every few months.

People whose lives were less meaningful spent four hours and two minutes watching television in an average day, compared to three hours and 17 minutes for those who saw life as less worthwhile.

On the results, published in the journal Proceedings of the National Academy of Sciences, Professor Steptoe said: ‘There seems to be a virtuous circle, as having a good relationship with others improves people’s sense of meaning, which can then lead to more social activities.’