Jamie Foxx is one proud father. The Oscar-winning actor took to Instagram to celebrate his eldest daughter, Corinne, whose new documentary premiered this past weekend.

Corinne’s film, Below the Belt, follows several women battling endometriosis, a reproductive health condition in which tissue similar to the uterine lining grows outside the uterus. Symptoms of endo, as it is often shortened, range from excruciatingly painful menstrual periods, to pain or discomfort during sex, to issues with fertility.

“So proud of my daughter @corinnefoxx please check out the documentary movie Below The Belt… you will be blown away by the courage the women possess in this film,” Jamie captioned his post.

Corinne has endometriosis herself, which was one reason why she wanted to highlight the condition in her documentary. Earlier this week, the 28-year-old actress and filmmaker uploaded a poignant video to Instagram depicting her endo journey, from her in a hospital gown for her first surgery for “a disease [she] had barely heard of” in 2018, to her walking the red carpet at Below the Belt’s premiere.

“[This is] a full circle moment for me,” she wrote.

Endometriosis affects an estimated 2–10% of American women ages 25–40, so it is fairly common. However, the condition is often misdiagnosed as pelvic inflammatory disease (PID) or ovarian cysts, which present with similar symptoms. Sometimes, endo symptoms are even dismissed by medical providers as rough periods. 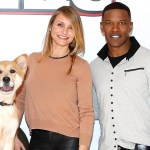 “In the personal & inspiring stories of four patients urgently searching for answers to mysterious symptoms, Below the Belt exposes widespread problems in our healthcare systems,” the film’s description reads. “Through the lens of endometriosis… the film shows how women are often dismissed, discounted & disbelieved.”

Corinne joins a growing number of celebrities who have opened up about their endometriosis journeys. Emmy-nominated producer and television host Padma Lakshmi was one of the first female celebrities to raise awareness about endo, revealing in 2015 that her diagnosis took a staggering 23 years to obtain. Lakshmi also co-founded the Endometriosis Foundation of America in 2009.

Girls star and creator Lena Dunham has also been vocal about her experience battling the condition, including her decision to get a hysterectomy at 31 to alleviate her symptoms.

Before you go, check out the best and most affordable mental health apps: