How we stopped cancer killing our marriage: The BBC’s Mr Cricket Jonathan ‘Aggers’ Agnew and his wife Emma on their life-or-death battle against disease 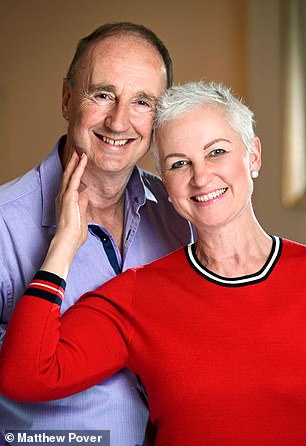 Jonathan Agnew, pictured with his wife Emma, left, thought it was ‘curtains’ when she told him she had been diagnosed with cancer

They are the words that everybody dreads. Yet when, in summer 2016, Emma Agnew was told she had an aggressive form of breast cancer, it was her husband Jonathan, the voice of BBC cricket, who burst into tears beside her.

‘I was convinced it was curtains. I couldn’t get the thought of a funeral out of my head,’ recalls the 59-year-old former England fast-bowler turned commentator, affectionately known as Aggers.

Emma, meanwhile, took the diagnosis in her stride.

‘I refused to think the worst,’ she says. ‘The doctors were wonderful, and told me if I gave them a year they would give me my life back.’

They were right: two years on, and in the flesh it’s hard to believe that 53-year-old Emma, a BBC producer, was ever ill.

Tall, with striking blue eyes, she is the picture of health, her cropped ice-white hair – she lost her medium-length blonde hair during chemotherapy – is the only testament to what she has been through.

‘I think she looks beautiful,’ smiles Jonathan, clearly as smitten as he was on their wedding day in 1996, when they vowed to stand by one another in sickness and in health.

Their close bond is obvious – indeed, the Agnews say Emma’s illness brought them closer than ever. Yet it is well known that cancer can have a devastating impact on marriages, particularly when the woman is affected.

One recent study found that one woman in five with cancer was either separated or divorced within six months of diagnosis – seven times the number of men who faced similar health problems.

Former breast surgeon turned cancer advocate Liz O’Riordan – who has had breast cancer herself twice – says: ‘Cancer can be hard for the carer – and it’s a two-way street.

‘When facing treatment, a patient can retreat into themselves, or perhaps look for support online from others in the same boat.

‘Their partner may want to help, but not know how and so feel left out. If you can face things as a team, and say let’s do this together, then it’s better for both parties.’ 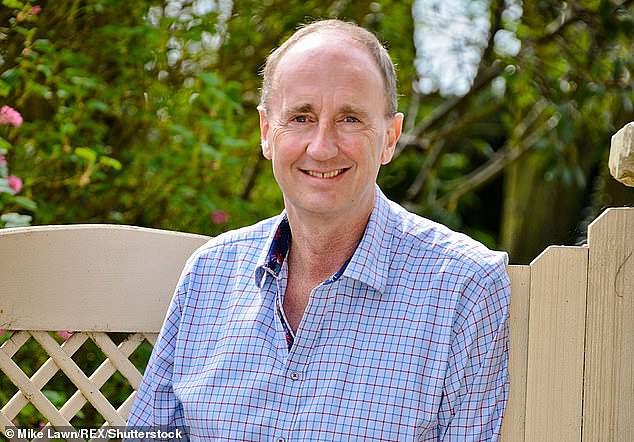 Mr Agnew said from the beginning of the process, it was a case of ‘we’ve got cancer’

For their part, the Agnews ‘dug in together’. Emma says: ‘Jonathan wanted to be involved in everything. We called ourselves Team Emma.’

Jonathan says: ‘From the start it was very much a case of, “We’ve got cancer.” ’

Determined to be by his wife’s side during her treatment, Jonathan – whose job sees him travelling many months of the year – knew he had to dramatically cut back on work commitments.

‘I explained the situation to the BBC management and they were very understanding – they pretty much let me work when I wanted,’ he recalls.

‘If I did do a job, I’d leave early to come home and look after her and in between I did what I could.’

A particular work highlight for Jonathan was interviewing Theresa May.

The Prime Minister, a cricket fan, was the lunchtime guest on BBC Radio 5 Live’s Test Match Special in September 2017 – where she revealed she was a fan of former England captain Geoffrey Boycott. ‘She gave us a box of her home-made chocolate brownies,’ he says. ‘I was lucky I could be flexible.’

Emma had been diagnosed four months earlier, in June that year – weeks after Jonathan was awarded an MBE in recognition for what was then a 26-year career. 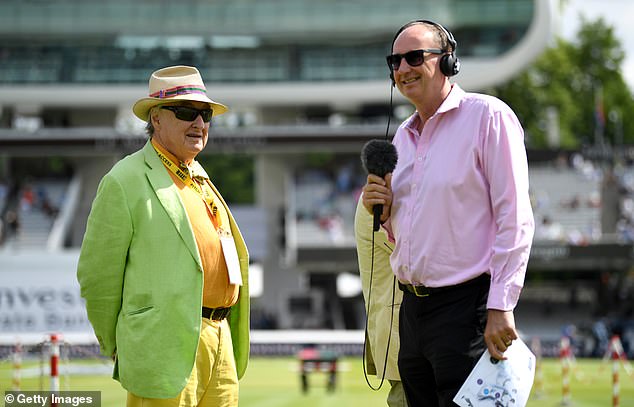 Aggers, pictured right alongside legendary commentator Henry Blofeld, left, cut down on his workload so he was in a position to support his wife through her battle against the disease

Emma, who has no family history of cancer, had undergone a routine mammogram which had been clear.

But after noticing a slight puckering on her right nipple, and remembering how a nurse had urged her to ‘look as well as feel’, she decided to get herself checked out again. Her GP took her concerns seriously.

‘He couldn’t feel a lump but said “It’s a change so let’s send you off to the breast clinic for a scan”,’ she recalls.

When she was told she had an aggressive tumour, Emma says her first thought was how to break the news to her children from a previous marriage, Charlotte, 28, and Thomas, 24, who had only recently settled in Australia.

‘They were anxious as they lost their father to motor neurone disease in 2005 so didn’t want to lose their mother too,’ says Emma.

A gruelling treatment plan was put into place: chemotherapy for 24 weeks, then removal of part of Emma’s right breast, including nipple and lymph nodes, followed by four weeks of radiotherapy.

The couple admit that for all their ‘can-do’ attitude, there were, inevitably, some ‘dark nights of the soul’ in those early weeks.

Emma admits to a ‘brief snivel’ when the steroids she was prescribed to help with the side effects of chemotherapy left her ‘blown up like a Duracell bunny’.

‘My face got so fat my eyes virtually disappeared, and my skin was red raw and itchy. But then I just stopped looking in the mirror,’ she says with a laugh.

Jonathan, however, struggled. Emma says: ‘He cried over the chemotherapy nurse, he cried to my specialist and he cried in front of my closest girlfriends. I’ve always known he was emotional, but it was a surprise. I suppose he’d had a reasonably charmed life and it had been turned upside down.’

At one point Jonathan was prescribed tranquillisers by his GP to help him cope. ‘I am not very good at putting on a front,’ he says. ‘I just felt really stressed so I went to the doctor. ’

Emma admits it was helpful for her too. ‘There was a point where I couldn’t worry too much about him. I had to get my head down and get on with my treatment.

‘I would wake up in the night and he would be watching me thinking I’d died, and that’s quite a pressure.’

Happily, by February last year, following surgery, she was given the good news there was no sign of cancer, and the final all-clear came a year ago, in May.

Emma remains on medication – she takes Zometa, a drug to prevent bone cancer, as this is where breast cancer most commonly spreads to.

They know they are lucky. At a recent check-up, the Agnews spotted a young couple waiting in the oncology department.

‘I knew from their faces they were terrified,’ Jonathan recalls. ‘I walked over to them and told them I knew why they were there because that was us a few months ago. And we are evidence that this will all be all right.’