Women who live next to a park have an even lower risk of heart disease than men, study finds

Living near parks and green spaces in towns and cities reduces the risk of heart disease, according to research.

A five-year study found those whose homes are surrounded by more vegetation are less likely to suffer a stroke, heart attack or high blood pressure.

And the stress-reducing effects are more pronounced in women than in men, the research revealed.

The evidence adds to growing calls for urban planners to include green spaces in new developments. 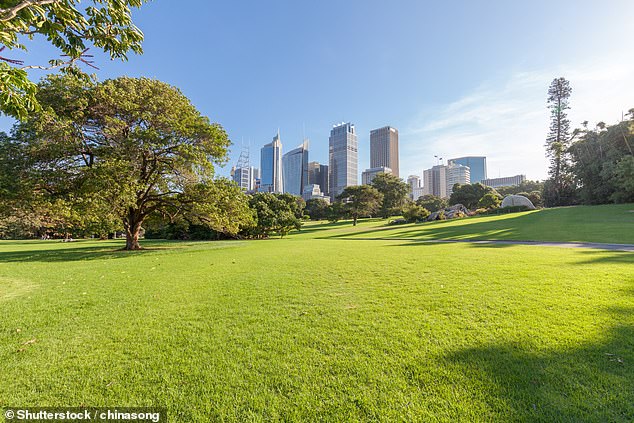 People living close to parks or green space are less likely to have heart or artery problems because trees and plants reduce levels of a stress chemical in the body and filter out toxic compounds in polluted air, researchers say

The research was led by Professor Aruni Bhatnagar, director of the University of Louisville’s Diabetes and Obesity Centre.

He said: ‘Our study shows living in a neighbourhood dense with trees, bushes and other green vegetation may be good for the health of your heart and blood vessels.

‘Increasing the amount of vegetation in a neighbourhood may be an unrecognised environmental influence on cardiovascular health and a potentially significant public health intervention.’

The study was based on blood and urine samples collected from 408 people in the US of varying ages, ethnicities and social backgrounds.

Professor Bhatnagar and colleagues looked for biomarkers – chemicals and proteins which reflect a patient’s health – of blood vessel injury and the risk of having cardiovascular disease.

Participants living in areas with more green vegetation had reduced levels of adrenalin – a chemical linked to stress – in their urine.

Adrenalin, also known as epinephrine, causes the blood vessels to narrow and can increase blood pressure, putting extra strain on the heart.

People in greener areas also had fewer free radicals – molecules which can lead to life-threatening illnesses by damaging DNA, indicating they were in better health.

Interestingly, the link between green spaces and reduced adrenalin was stronger among women.

HOUSEPLANTS CAN IMPROVE YOUR HEALTH

Having a houseplant could make you healthier by leaving the air you breathe less harsh and higher in oxygen, scientists say.

Research has found having a plant like a peace lily or ivy indoors can provide benefits by improving the air quality in the home.

‘Thirsty’ plants which demand a lot of water and sunlight could improve the atmosphere through their own growing processes.

These involve releasing water vapour into the air around them, and sucking in carbon dioxide and pumping out oxygen.

In turn, this could be a ‘simple and affordable’ way to help people reduce their likelihood of dry skin and breathing problems or illnesses, researchers from the University of Reading and the Royal Horticultural Society said.

The benefit was also greater among people not taking blood pressure-lowering beta-blockers and those who had not previously had a heart attack.

Density of green spaces near the participants’ homes were measured using satellite images.

And air pollution levels were assessed using measurements made by the Environmental Protection Agency (EPA).

Participants were recruited from the University of Louisville’s outpatient cardiology clinic and were mostly at a higher risk of heart disease.

Professor Bhatnagar said the study is the most thorough of its kind.

He said: ‘Previous studies have also suggested neighbourhood green spaces are associated with positive effects on overall physical and psychosocial health and well-being, as well as reduced rates of death from cardiovascular and respiratory diseases, and improved rates of stroke survival.

‘However, these reports are largely limited by their reliance on self-reported questionnaires and area-level records and evaluations.’

Trees are particularly good at filtering air pollutants such as ozone, sulphur dioxide, nitrogen oxides and particulate matter, which come from cars and roadworks.

Pollution can cause heart disease by damaging the insides of blood vessels, making blood more likely to clot, and affecting the normal function of the heart.

The UK government says natural environments could also act as a vital resource for improving health and well-being.

A recent report by the Parliamentary Office of Science and Technology said physical and mental illnesses associated with sedentary urban lifestyles are an increasing economic and social cost.

It found the risk of mortality caused by cardiovascular disease was lower in residential areas that have higher levels of ‘greenness’.

The experts also said there is evidence exposure to nature could be used as part of the treatment for some conditions.

But there are challenges to providing green spaces – such as how to make parks easily accessible and how to fund both their creation and maintenance.

Heart and circulatory diseases cause a quarter (25 per cent) of all deaths in the UK – that’s over 150,000 deaths each year.

The research was published in the Journal of the American Heart Association.