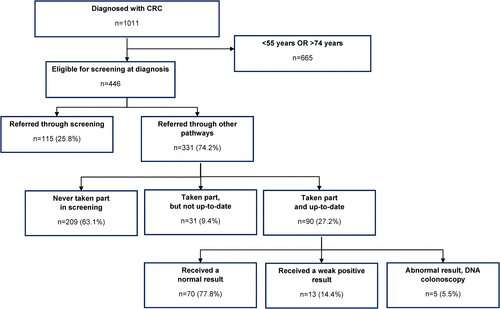 More than 70% of patients with bowel cancer are not diagnosed using official screening programs meaning diagnoses are often made late, when the cancer is at an advanced stage, according to new research from the University of Surrey. Embarrassment is the biggest reason for avoiding screening.

In a paper published by the Journal of Medical Screening, researchers investigated the number of bowel cancers diagnosed outside of traditional screening programs and the reasons why this may be. Screening for bowel cancer consists of a fecal immunochemical test and involves taking a sample of feces to be examined for traces of blood.

Dr. Robert Kerrison, Lecturer in Cancer Care at the University of Surrey, said:

“Bowel cancer is one of the biggest cancer killers in England. When diagnosed early, the disease is highly treatable. It is vital, therefore, that it is caught early, if we are to reduce of the number of deaths from bowel cancer. Screening is one of the best and most effective ways of detecting cancer early, as it allows us to test for the disease, before symptoms develop and I would urge those eligible to utilize the screening kits which are automatically sent to our homes for samples to be provided.

“It is very concerning that the majority of patients are receiving diagnoses via other routes, often at a time when the cancer is at a more advanced stage, as our research shows. There are a number of different reasons why people don’t take part in screening. One of the biggest reasons is that people often feel embarrassed when it comes to poo (the ‘poo taboo’ as Deborah James describes it). We need to normalize this and help people understand the importance of screening, as it undoubtedly saves lives.”

Analyzing data from more than 400 patients with bowel cancer at St. Mark’s Hospital in Harrow, all of whom were eligible to take part in screening at the time of their diagnosis, the researchers found that more than 60% of those not diagnosed through screening had never taken part in official programs, and a smaller proportion (nearly 10%) had not kept up to date with regular screening. Those who had not kept up to date were more likely to be diagnosed with metastatic disease, when cancer spreads to a different part of the body and is more difficult to treat.