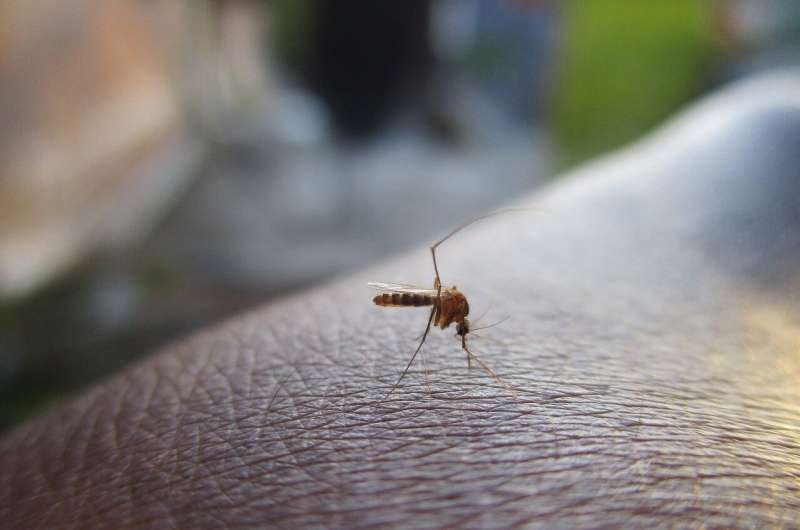 An estimated 8.4 billion people could be at risk from malaria and dengue by the end of the century if emissions keep rising at current levels, according to a new study published in The Lancet Planetary Health.

The research team estimates that this worst-case scenario would mean the population at risk of the diseases might increase by up to 4.7 additional billion people (relative to the period 1970-1999), particularly in lowlands and urban areas, if temperatures rise by about 3.7°C 1 by 2100 compared to pre-industrial levels.

The study was led by the London School of Hygiene & Tropical Medicine (LSHTM) with partners from Umeå University, Sweden; Abdus Salam International Centre for Theoretical Physics, Italy; University of Heidelberg, Germany; and the University of Liverpool.

The team used a range of models to measure the potential impact of climate change on the length of the transmission season and population at risk of two important mosquito-borne diseases—malaria and dengue—by the end of the 21st century compared with 100 years earlier. They made their predictions based on different levels of greenhouse gas emissions, population density (to represent urbanization) and altitude.

All the scenarios predicted an overall increase in the population at risk of malaria and dengue over the century. However, the impact would reduce substantially if action were taken to reduce global emissions, according to the modeling.

In the scenario where emissions are reduced the most—greenhouse gas emissions decline by 2020 and go to zero by 2100 and global mean temperature increases by 1°C between 2081 and 2100—an additional 2.35 billion people are predicted to be living in areas suitable for malaria transmission. For dengue in this scenario, the modeling suggests 2.41 additional billion people could be at risk.

The study highlighted that if emission levels continue to rise at current levels, tropical high-elevation areas (more than 1,000 metres above sea level) in areas such as Ethiopia, Angola, South Africa, and Madagascar could experience up to 1.6 additional climatically suitable months for malaria transmission in 2070-2099 compared with the period 1970-1999.

The study predicted that the length of the dengue transmission season could increase by up to four additional months in tropical lowland areas in south east Asia, sub-Saharan Africa, and the Indian sub-continent.

“This work strongly suggests that reducing greenhouse gas emissions could prevent millions of people from contracting malaria and dengue. The results show low-emission scenarios significantly reduce length of transmission, as well as the number of people at risk. Action to limit global temperature increases well below 2°C must continue.

“But policymakers and public health officials should get ready for all scenarios, including those where emissions remain at high levels. This is particularly important in areas that are currently disease-free and where the health systems are likely to be unprepared for major outbreaks.”

Malaria and dengue, the most important mosquito-borne global threats3, are being found in more areas, gradually emerging in previously unaffected places, and re-emerging in places where they had subsided for decades. Malaria is shifting towards higher altitudes, and urbanization is associated with increasing dengue risk.

The research team’s methods involved identifying the risk for each World Health Organization (WHO) region4 using six emission and socioeconomic scenario combinations ranging from conservative to business as usual5, and six disease models.

Although the worst-case scenario models indicated that some areas could become too hot for some mosquito species, that situation would likely cause other health effects such as heat-related mortality, reduced labor productivity, and reduced food production.

Moreover, mosquito-borne diseases could become a bigger problem elsewhere, including expanding further north and into higher altitude and temperate regions, as climatic conditions such as temperature and rainfall enable malaria and dengue to thrive in different parts of the world.

Senior author Dr. Rachel Lowe, Associate Professor and Royal Society Dorothy Hodgkin Fellow at LSHTM, said: “A number of interventions will be needed to adapt to the health effects of a warmer and more urbanized world and to prepare for all scenarios.

“Our findings stress the importance of increased surveillance in potential hotspot areas to monitor the emergence of diseases, especially in places without previous experience of dengue or malaria.

“Public health action will be particularly important in areas where transmission is occasional because public health systems might be unprepared to control and prevent these diseases.”