Marijuana-laced granola bars were the only thing that quelled the haunting flashbacks and anxiety of a Holocaust survivor who developed Alzheimer’s, his family claims.

Alexander Spier spent three years in concentration camps, including Auschwitz-Birkenau and Bergen-Belsen, before he was freed in the liberation of 1945.

As soon as he was freed he reclaimed his life, emigrating to the US that same year, where he met his wife Sonja, they had a son and a daughter, and he worked hard, first as a jeweler and watchmaker, then heading up his own real estate business.

Tragically, in 2010, he was diagnosed with the age-related brain disease that consumed him for seven years until he passed away.

His relatives recall the trauma of watching him relive his war-era memories, shouting in Dutch and German: ‘Where is my mother?’

But according to his son, Greg Spier, they managed to offer him one small piece of respite in the form of granola bars laced with cannabis, which they say eased his agitation and allowed him to sleep.

Spier passed away in 2017, and now the Spier Family Foundation is partnering with Harvard’s McLean Psychiatric Hospital and paying for marijuana research in hopes of shedding fresh light on Alzheimer’s and potentially offering better treatments. 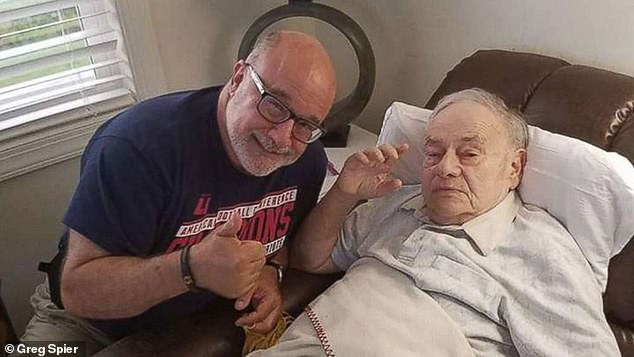 Alexander Spier, of Foxborough, Massachusetts, was diagnosed with Alzheimer’s disease almost 10 years ago. No long-term care or antipsychotic drugs helped his symptoms of disorientation and changes in mood and behavior. Pictured, Spier, right, with his son Greg 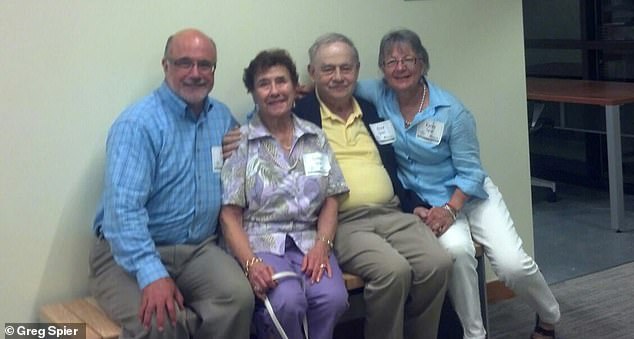 His family says his agitation subsided and he was able to sleep when he would eat granola bars laced with cannabis. Pictured, left to right: Spier’s son Greg, his wife Sonja, Spier, and his daughter-in-law Kathryn in 2013

Spier grew up in Amsterdam, Holland, and was a member of the Dutch resistance during the Nazi occupation of the Netherlands during World War II.

Spier was tattooed with the identification number 164023 and spent the next three years in three different concentration camps before he was freed during the 1945 liberation.

He emigrated to the US at the end of World War II where he worked as a watchmaker and jeweler before starting a real estate company.

He met his wife Sonja in 1951 and they married after just 82 days of knowing each other. The couple moved to Foxborugh, Massachusetts, where they raised a son and a daughter.

Around 2010, Spier was diagnosed with Alzheimer’s disease.

An estimated 5.7 million Americans of all ages are living with Alzheimer’s disease in 2018.

HOW TO DETECT ALZHEIMER’S

Alzheimer’s disease is a progressive brain disorder that slowly destroys memory, thinking skills and the ability to perform simple tasks.

It is the cause of 60 percent to 70 percent of cases of dementia.

The majority of people with Alzheimer’s are age 65 and older.

It is unknown what causes Alzheimer’s. Those who have the APOE gene are more likely to develop late-onset Alzheimer’s.

There is no known cure for Alzheimer’s, but experts suggest physical exercise, social interaction and adding brain boosting omega-3 fats to your diet to prevent or slowdown the onset of symptoms.

Sufferers experience a decline in cognitive, behavioral and physical abilities and there is no cure.

According to Spier’s son, Greg, his fathers declined rapidly in health for the final two years of his life.

‘It was the most difficult time of my life, having to see him deteriorate,’ he told ABC News.

‘My father spoke five languages, and he was speaking Dutch and German, reliving the three concentration camps he survived.’

Greg says during those final two years, Spier would often plead in German: ‘Where is my mother?’

About 50 percent of Alzheimer’s patients develop what are known as neuropsychiatric symptoms, which include agitation, aggression and disorientation.

As his symptoms worsened, Spier was moved into a memory program in Florida, which is a form of long-term care that is designed to meet the specific needs of a person with Alzheimer’s disease or dementia.

Doctors tried to treat him with antipsychotic and anti-seizure medications, but they only worsened his symptoms.

Greg told ABC News that he and a niece that lives in Colorado were the family members who decided to try marijuana edibles as a final resort.

Greg or the private assistant living with Spier would feed him cannabis granola bars up to four times a day during the final months of his life.

‘The only thing that seemed to give him any reprieve was the marijuana,’ Greg told ABC, saying the bars also helped his father sleep.

Spier died in September 2017 from Alzheimer’s complications, and now the Spier Family Foundation is pushing for research on potential benefits of marijuana in Alzheimer’s and dementia patients.

There has not been a great deal of research done on the effects of cannabis in Alzheimer’s patients, but a few studies have showed promising findings.

In a study conducted this year, researchers at the University Medical Center Goettingen in Germany treated mice that had an Alzheimer’s like-disease with tetrahydrocannabinol (THC).

THC is the psychoactive compound responsible for the euphoric, ‘high’ feeling often associated with marijuana.

Compared to the mice not treated with THC, mice that were treated had fewer lost brain cells, performed better on memory tests, and had 20 percent less of the plaques in the brain that are believed to cause cognitive decline. 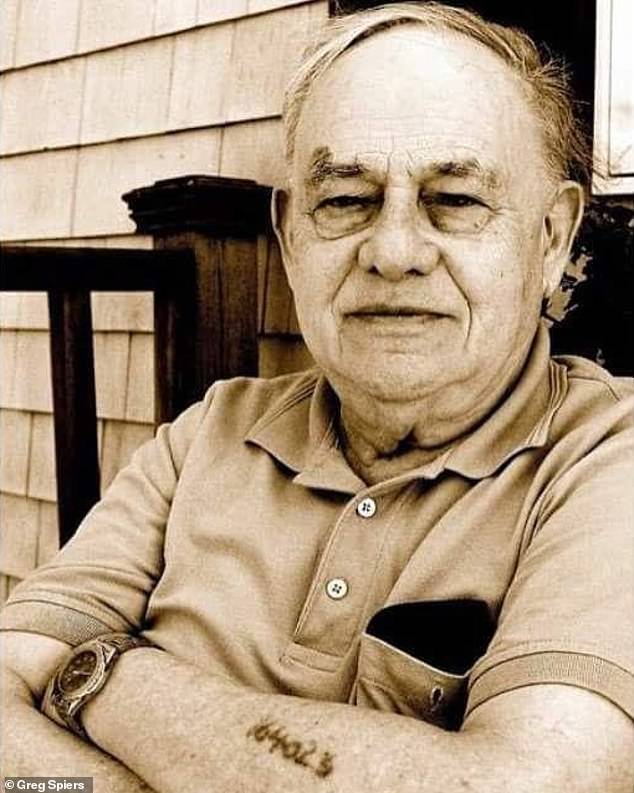 Some studies conducted on mice showed that when the rodents were treated with THC, they performed better on memory tests and had fewer plaques in the brain that are believed to cause cognitive decline. Pictured: Spier in 2014 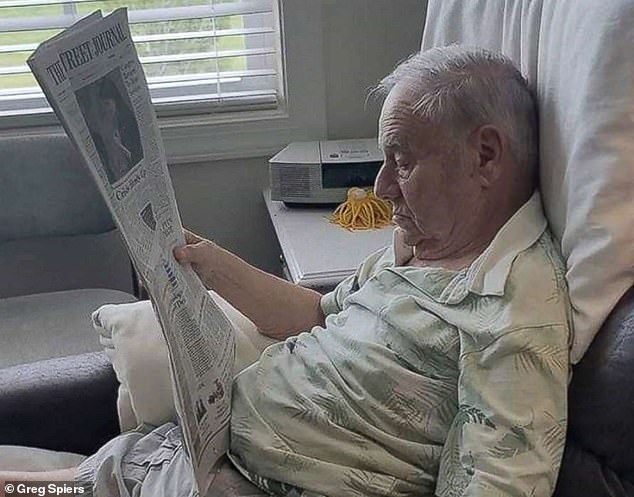 The Spier Family Foundation is partnering with Harvard’s McLean Psychiatric Hospital and paying for marijuana research in hopes of shedding fresh light on Alzheimer’s and potentially offering better treatments. Pictured: Spier in 2017

While several studies have linked cannabis use to long-term damage in teenage brains, Dr Brent Forester, chief of the division of geriatric psychiatry at McLean Hospital in Boston, said the same effects may not be true for people who begin in old age.

In a 2017 joint study – conducted by the University of Bonn in Germany and Hebrew University in Jerusalem, Israel – researchers gave low doses of THC to old mice.

When they tested the mice in learning capacity and memory, results were just as good as those of two-month old mice.

Dr Forester and his team have partnered with the Spier family to conduct research on cannabis treatments in Alzheimer’s patients.

They previously published a study in 2014 where they gave the synthetic THC drug dronabinol to patients diagnosed with dementia.

Results showed that the patients’ agitation and sleep duration were improved, and they’re now recruiting for a larger trial that will be funded by the National Institute on Aging.

‘We really need to open up opportunities to study medical marijuana for this particular indication,’ Dr Forester told ABC News.

‘I think there’s enough evidence from the synthetic THC as well as anecdotal reports that it’s certainly worth studying.’

Last week, Minnesota joined 12 states and Washington, DC that allow residents to be prescribed medical marijuana either for Alzheimer’s or related symptoms.