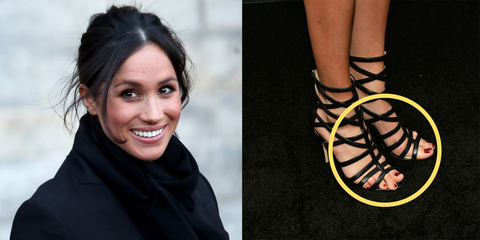 When Meghan Markle stepped out in a pair of strappy sandals back in April, the media went wild—but not necessarily because those shoes were super-cute (they were, though).

Meghan’s toes were on display, which revealed that her second toe is significantly longer than her first (the horror, amirite?).

Kidding (obviously)—having a second toe that’s longer than your big toe is common AF; but what many people don’t know is that there’s a name for that (super-small, super-common) deformity: Morton’s Toe.

Morton’s Toe is typically NBD, according to Gary A. Pichney, D.P.M., a podiatric surgeon at The Institute for Foot and Ankle Reconstruction at Mercy Medical Center. “It’s just a hereditary anomaly,” he says. “About 20 percent of the population has it.”

You said ‘typically’—is there ever a case when Morton’s Toe can cause issues?

“If you don’t have any pain associated with it, it’s not a big deal,” Pichney says. However, you should keep a few things in mind.

First of all, shoes aren’t designed for people with a longer second toe. And, if you’re not wearing properly fitting shoes (i.e., shoes that are too tight on your second toe) you could end up with hard corns on your toe, calluses, and even stress fractures in your feet from the constant pressure of your shoe, Pichney says.

That’s why he recommends that people with Morton’s Toe look for shoes with a roomier toe box. “Make sure there’s room for that second toe,” Pichney says, adding that you don’t want the top of the shoe hitting the top of your toe so it pushes on it.

People with Morton’s Toe are also at a greater risk of developing a hammer toe (where the toe becomes permanently bent), again, if they don’t wear the right shoes, says Kenneth Jung, M.D., a foot and ankle surgeon at Cedars-Sinai Kerlan-Jobe Institute in Los Angeles.

Still, other than needing to wear shoes that fit, Morton’s Toe shouldn’t be a big factor in your life—and if it makes you a bit more similar to Meghan Markle, I’d consider that a win.