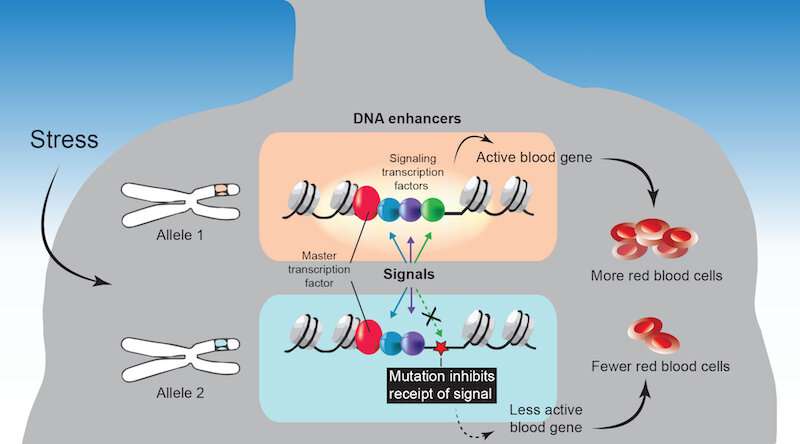 Genetics has made huge strides over the past 20 years, from the sequencing of the human genome to a growing understanding of factors that turn genes on and off, namely transcription factors and the DNA “enhancer” sequences they bind to. New research from Boston Children’s Hospital introduces another previously unknown layer of human genetics. It finds genetic variation in a gene’s ability to react to chemical signals from the outside.

The study, published today in Nature Genetics, focused on genetic variations in red blood cell traits. But Leonard Zon, MD, director of the Stem Cell Research Program at Boston Children’s, believes the findings apply to any tissue or organ in the body. They may help explain why some people are more or less susceptible to disease, why organs function differently, and why some people respond more to drugs than others.

“We found that human genetics determine, on a gene to gene basis, whether a cell will respond to an outside signal,” says Zon, who is also affiliated with Dana-Farber/Boston Children’s Cancer and Blood Disorders Center, the Howard Hughes Medical Institute, and the Harvard Stem Cell Institute. “We believe that many genetic conditions are due to a defect in this response—a ‘signalopathy.'”

When Zon and colleagues looked at blood cell progenitors in the lab, they found that many of the variants altered the DNA sequences of enhancers to which signaling transcription factors bind. This, they showed, prevented the factors from binding to the enhancer. That missed signal prevented adjacent genes from turning on—genes that normally would turn on in response to cues driving red blood cell maturation.

“A mutation in this code kicks the signaling factor off the DNA, because it doesn’t have a binding site,” elaborates Avik Choudhuri, Ph.D., first author on the study, who is also in the Harvard Department of Stem Cell and Regenerative Biology (HSCRB). “This renders an important blood gene periodically unresponsive to the signal. Such an abnormal response, especially under stress, would cause tissue damage and disease over time.”

A better understanding of human traits

GWAS studies have mapped many traits to variations in DNA enhancer sequences. But no one had ever shown that traits can be altered because of a failure of signals to get through.

“This wasn’t known before,” says Zon. “If we want to better understand human variation, we have to find those regions in the genome, in every tissue, that are receiving transcriptional signals from outside the cell. People vary in how much signaling can happen in an individual gene.”

Looking to the future, Zon believes the team’s work will open up new therapeutic opportunities. He envisions a computational analysis of a specific gene, its enhancers, and sites on the enhancers where signaling chemicals bind. Such analysis could predict which signals a given cell type will be most likely to “hear,” guiding the choice of drugs. A company Zon co-founded in 2018, CAMP4 Therapeutics, is focused on drug discovery through this kind of mapping.

“You could just look at the DNA code and know what drug to give,” Zon speculates. “If a mutation shuts down one signal binding site, you might be able to rescue the disease by sending a different signal.”