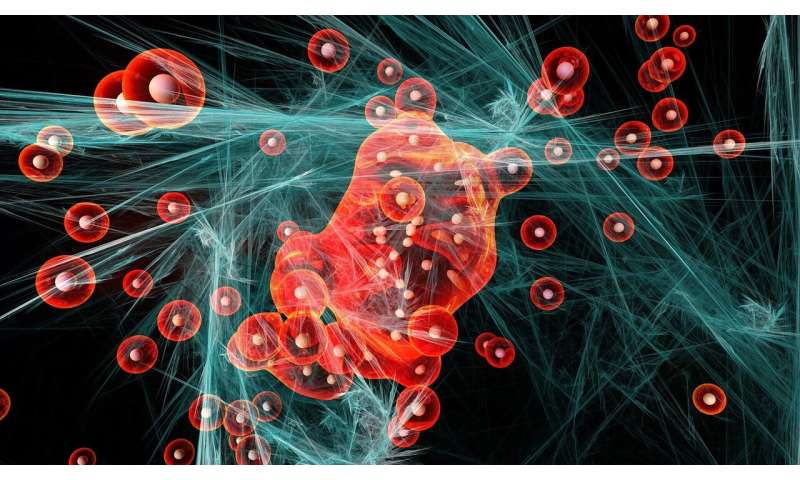 The body’s immune system defeats diseases by sensing foreign invaders, like bacteria or viruses, and then mounting a response against them.

But just how immune cell receptors work together to sense multiple molecules and make these decisions remained a mystery. Now, researchers at the Pritzker School of Molecular Engineering (PME) at the University of Chicago have discovered a general property for understanding how these cells sense and respond to microbial signals.

The result, led by Asst. Prof. Nicolas Chevrier and published October 27 in the journal Cell Systems, led to a more effective cancer immunotherapy in mice and could lead to more effective vaccines for both existing and novel viruses.

Each of the body’s innate immune cells has receptors that recognize molecules from foreign pathogens. To fight off bacteria or viruses, those cells make decisions in response to complex combinations of inputs from those molecules. Though researchers have studied singular pathways, how these pathways work together is still not well understood.

Chevrier and his collaborators set out to better understand how cells integrate multiple signals into a response. Not only would it help answer a basic fundamental question of biology, it would also help design vaccines that use adjuvants, molecules that help modulate the immune system and enhance its response.

Though just a few vaccines currently use them, adjuvants might be the key to developing new kinds of vaccines. Right now, FDA-approved adjuvants target only one or two of the cell’s receptors. If researchers could find the right combination to target more, vaccines could become more effective.

Understanding how combinations work together

Chevrier and his collaborators used adjuvants to stimulate immune cells in petri dishes to figure out what happens when single molecules, pairs of molecules, and triplets of molecules are used. If the results were additive, the effects of one molecule and the effects of another molecule would, when combined, remain the same. Researchers found that wasn’t the case—two molecules combined together led to different effects than each had singularly.

But they did find that the effect of single molecules and pairs of molecules could accurately predict what happened with triplets of molecules.

“It could have been infinitely complex, but it’s not,” Chevrier said. “We are the first to show you can predict higher-order effects across immune pathways with very simple models.”

To prove their theory, the researchers injected cells conditioned with certain combinations of adjuvants—creating a specific cancer immunotherapy treatment—in a mouse model with tumors. The response was potent: the tumors grew five to ten times less in treated mice versus untreated mice.

“That was very encouraging,” Chevrier. “Now we need to better understand the mechanisms of why this worked so well.”

The researchers also hope to search for new combinations of adjuvants that have equally strong effects and eventually mount a clinical trial in humans.