More Australians are choosing healthier drinks, such as kombucha, probiotic potions and fresh juices, over alcohol, indicating a shift in our attitudes towards drinking.

In a new study, University of South Australia researcher Dr Rob Hallak interviewed 400 managers of pubs, restaurants and cafes to understand the impact of a growing demand for healthier options. 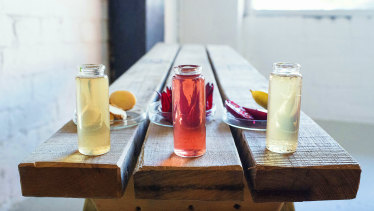 Kombucha is replacing alcohol as a popular choice in bars as drinking habits shift towards more healthy alternatives.Credit:Fairfax Media

Drink sales account for 40 per cent of the country’s $45 billion annual spend on eating out, with health drink sales reaching $2.1 billion in 2018.

Kombucha sales alone have increased by more than 700 per cent in recent years.

Demand for healthier drinks will continue to rise, according to the 2019 IWSR report.

As a result of demand, the industry is “shifting toward” a greater health focus, Hallak said, but the focus remains largely around food with the industry slower to respond to the desire for healthier drinks.

Opting out of the drinking culture is increasingly being seen as a positive and healthy lifestyle choice.

More than 35 per cent of the outlets surveyed sold healthier drinks, and three quarters of those experienced “very high demand” for them.

Reluctance by operators to offer healthier drinks includes the argument that the profit margins are smaller, storage/fridge space is limited, and their shelf life is short, Hallak said.

“The evidence shows while the cafes are pushing more of these healthier beverages, the pubs are obviously much less likely to be selling those products,” Hallak said.

He found evidence that more pubs and restaurants are “pushing kombucha as a mixer” to go with spirits, instead of “high-sugar” soft drinks.

These changes in drinking norms are positive because they give people licence to eschew unhealthy options.

Research shows more Australians are taking heed, with a declining number drinking alcohol at all, and, according to a 2019 Nielsen survey, 66 per cent of 21-34-year-olds consciously drinking less.

Ruby Warrington is the author of Sober Curious. The Brooklyn-based author, who is in Australia in February for a series of events with non-alcoholic spirits brand Lyre’s, says the current trend will lead future generations to view drinking “very differently”.

“The fact so many people are interested in what it means to be ‘sober curious’ shows the stigma around not drinking is rapidly falling away,” Warrington said.

“In some circles, it may still be frowned upon or seen as odd, but opting out of the drinking culture is increasingly being seen as a positive and healthy lifestyle choice. This is also being reflected in a more nuanced understanding of what problem drinking and alcohol addiction look like, and the way we view substance abuse in general.”

Professor Simone Pettigrew, from Curtin University's School of Psychology and a member of the Alcohol Advertising Review Board steering committee, said the consumer demand for healthier drinks points towards a promising trend.

“Beverage choice is largely a socio-cultural phenomenon, so these changes in drinking norms are positive because they give people licence to eschew unhealthy options that have been considered ‘normal’ for so long and allow them to make alternative choices instead,” she said. “Much of our work with alcohol in particular shows that people often drink when they don’t want to just to ‘fit in’.”

She said “it’s great to see growing consumer interest” in healthier beverages, but that both alcohol and soft drinks continue to be consumed in “quantities that are harmful” at a population level.

If this is to change, making healthier options available and affordable is key, and the industry and government should do more "to encourage entrepreneurs in this space".